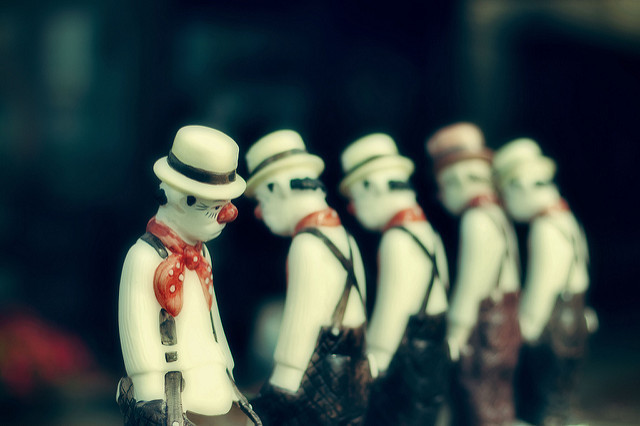 As everyone who cares about America is probably aware, clown hysteria has taken over the Carolinas. The big-shoed menaces are allegedly lurking in the woods near residences, offering candy and money to children. People are chasing the clowns into the woods with machetes and leaning hard on their 911 autodials. At least one apartment complex has issued an official anti-clown warning. It’s gotten so bad that police are discouraging people in those areas from dressing as clowns at all.
Why clowns? Why now? What’s going to happen next? Atlas Obscura spoke with cryptozoologist Loren Coleman—perhaps the world’s foremost authority on mysterious clowns—about this latest outbreak. Spoiler: he blames old wounds, sad journalists, and “the real clown,” Donald Trump.

Recent years have brought us various sudden clowns, most of which have eventually revealed themselves to be pranks, marketing stunts, or strange journeys of self-discovery. Many news reports have cited these incidents as predecessors to the latest wave. But to truly understand this new group, Coleman says, we have to look a little further back—specifically to 1981, when a similar clown epidemic overtook Boston.

On May 6th of that year, police received a report that “one or two men wearing clown outfits” were driving a candy-laden van around near Brookline’s Longwood School. (The van even had a broken headlight, for maximum punchbuggy-style kid attraction.) The next day, a similar report came from the Franklin Park horseshoe-playing grounds—though this man reportedly had only half a clown suit on, as he was naked from the waist down. According to a Boston Globe article entitled “Pupils Warned of Clowns,” the school district’s investigative councilor quickly issued a memo, instructing students to “stay away from strangers, especially ones dressed as clowns.”

At the time, Coleman was heading up a social services office in Charlestown, Massachusetts. He was also corresponding with a number of fellow cryptozoology fans—nearly 400 of them, spread out across the country. He coined the term “phantom clown,” and asked his network to send him any local newspaper clippings that referred to similar incidents. “I started getting copies from Cleveland, from both Kansas Cities,” he says. “I really started tracking that this was a nationwide phenomenon.”

This information enabled him to draw up a sort of Theory of the Phantom Clown. “Phantom clowns are usually very specific,” says Coleman. “There’s a clown, often seen in a van, kids being approached and telling adults, and then the clowns never being caught. When [the Carolina incidents] started up, it linked back to all those old stories for me.”

So where do phantom clowns come from? In 1981, Boston eventually settled on “the minds of children.” A follow-up Globe article, released two days after the first, recasts the alleged perpetrators as victims and vice-versa. After introducing us to a persecuted Stoughton clown, wrongly questioned by police on his way to deliver a perfectly innocent clown-a-gram, the authors quote numerous officers flummoxed by the clowndemonium. “We’ve had over 20 calls on 911, [but] no adult civilian or police officer has ever seen a clown,” says one. “If it’s someone’s idea of a joke, it’s a sick joke,” says another.

A similar story in Chicago, from 1991, reached the same conclusion. “The reports, mainly from children, have varied,” the Chicago Tribune wrote, after several alleged sightings of a van clown named Homey. “They seem to be reaching near-mythic proportions, tumbling out from different parts of the city like clowns falling out of a Volkswagen.”

READ THE REST OF THE STORY AT http://www.atlasobscura.com/articles/the-1981-clowns-were-spotted-across-boston-can-this-help-explain-current-clown-panic