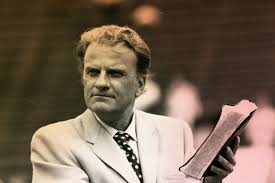 Evangelist minister Rev. Billy Graham recently revealed that he thinks UFOs may be “messengers of the Lord.”

In his latest book, Angels: God’s Secret Agents, Graham writes that flying saucers “bear striking resemblance to angelic aircraft described thousands of years ago in the Old Testament.” Graham further contends that the reason UFOs are able to defy the laws of aerodynamics is that the beings who operate these” celestial wonders” are not flesh-and-blood mortals, but instead are of a “higher order.” He added that the ufonauts or angels are “so glorious and impressively beautiful as to stun and amaze men who witness their presence.”