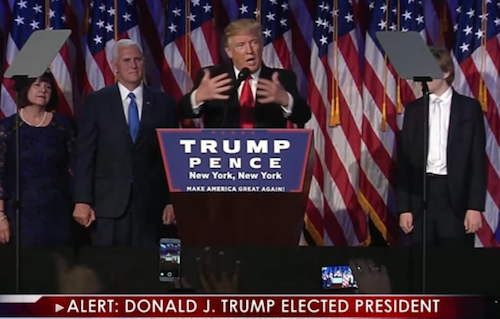 President Elect Trump is the new title for New York businessman, millionaire and Republican candidate Donald J. Trump, who yesterday on November 8th, 2016 successfully won the US presidential election. Trump managed to defeat favorite Hillary Clinton by a relatively narrow margin. The victory came as a shock to many Americans, regardless of where they reside on the political spectrum. For many in the alternative media, the victory of President Elect Trump comes with a great sense of relief that career criminal Hillary Clinton was not elected (or installed) as so many had expected. Clinton had already showed a propensity to collude, cheat and lie during the Democratic Primaries where she triumphed with dirty tactics over Bernie Sanders. For many others, turned off by Trump’s racism, sexism, xenophobia, Islamophobia and generally flippant comments, the Trump victory is devastating. Undoubtedly, the reality of the result is challenging many people psychologically and emotionally.

The result is especially surprising given the degree to which Hillary Clinton had ingratiated herself with the upper echelons of the NWO (New World Order). From an outside perspective, it seemed Clinton had left no stone unturned in brown-nosing and sucking up to the most powerful people and organizations in the world, including the Rothschilds, Goldman Sachs, the Rockefeller CFR (Council on Foreign Relations) and many many more. Additionally, given her propensity for criminality and her powerful backers such as George Soros, coupled with the serious problems electronic voting machines possess in being able to be hacked and the vote flipped, many are left wondering how Hillary lost. What went wrong?

At this stage in the game of post-election analysis, we can point to a few things. Hillary’s criminal past clearly caught up with her. It is unprecedented in the history of US presidential elections for a leading candidate to be under an on-again, off-again criminal investigation. Clinton simply has so many scandals in her recent and distant past that it’s like trying to stop a ship with 30 holes from sinking; you can’t plug them all. She was also running up against the problem that the Democrats had been in power for 8 years, when recent history shows that power seems to change hands in around that time frame. Clinton represented the establishment, and as the popularity of both Bernie Sanders and Donald Trump has shown, people are tired of the same. They intuitively know the system is rigged and corrupt, even if they can’t exactly put their fingers on it. Obama, Mr. “Hope and Change”, got in with a slick campaign of promising something different (upon which he didn’t deliver). Trump represented anti-establishment, and whether he truly embodies that or not is an entirely different matter, because it’s all about perception.

Does a Trump Victory Show that NWO Powerbrokers Are Less in Control than It Seems?

The win of President Elect Trump is a truly shocking and monumental event. Many people (including myself) were predicting that it was a foregone conclusion that Clinton would win. For instance, founder of WikiLeaks Julian Assange stated before the election that “Trump would not permitted to win”. The MSM (Mainstream Media) were clearly favoring Clinton at almost every turn. Whatever you think of Trump, we can at least say the will of the majority of American voters was respected, which is a relief, given how much corruption exists in our society today.

The question now is this: is a Trump victory the result the NWO powerbrokers wanted all along, for reasons we are yet to see? Or is it a genuine uprising against these forces?

What Does a Trump Presidency Mean for Liberty and Freedom?

For me, Trump can be summarized in one word: unpredictable. President Elect Trump truly embodies unpredictability more than any other high-level politician around. One moment he is railing against the 9/11 official story, then he is declaring his love for Israel, then he is bringing up the vaccine-autism connection, then he is suggesting Snowden be killed. Next he is suggesting GMO corn makes you stupid, then he suggesting Muslims be banned from the US, then he is calling global warming a hoax, then he is suggesting the Government be given the power to shut down the internet. Then, after all of that, he makes friendly overtures to Russia while demonizing the hell out of Iran. What does he stand for? Peace or war? Freedom or tyranny?

At this stage no one knows, probably not even Trump himself. He has contradicted himself numerous times throughout his campaign, and merely once suggesting a good idea (i.e. looking at who controls the issuance of money instead of letting the international bankers via the Federal Reserve control it) doesn’t mean it will become his policy. Unpredictability is one of Trump’s great qualities, but also one of his most dangerous. A lot will depend on with whom he surrounds himself once becoming President Trump, and what kind of advice they give him. His VP Mike Pence is a standard conservative Republican who will be no doubt far more to the liking of the NWO conspirators, but Trump is also taking advice from retired DIA (Defense Intelligence Agency) chief Michael Flynn, the man who came out and highlighted how the US created ISIS in a declassified DIA document.

For now, America and the world have around two-and-a-half months to get over the incredible shock of yesterday’s result and psychologically prepare themselves for a Trump presidency. Meanwhile, it would be foolish for us to expect that one man can fix all of America’s problems. It will be the job of the independent and alternative media to hold Trump to his promises and his word, and to continue to share ideas of how we can truly create a better, freer and more just society. This necessarily involves questioning the very structures and systems of society, and will never magically improve with just the passing of the baton from one politician to another.

Want the latest commentary and analysis on Conspiracy, Health, Geopolitics, Sovereignty, Consciousness and more? Sign up for free blog updates!

Makia Freeman is the editor of alternative news / independent media site The Freedom Articles and senior researcher at ToolsForFreedom.com (FaceBook here), writing on many aspects of truth and freedom, from exposing aspects of the worldwide conspiracy to suggesting solutions for how humanity can create a new system of peace and abundance.