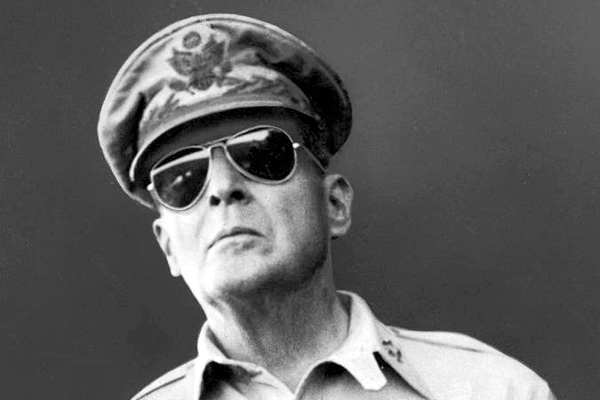 by John A. Keel
(Originally Published in UFO Report Magazine) 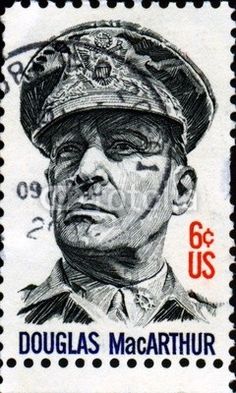 An elite group of scientists and military officers gathered for a very private meeting in New York City in 1958. Their purpose was to discuss UFOs and the principal speaker at the meeting was none other than Gen. Douglas MacArthur, perhaps the greatest military leader of modern times. His record as the Supreme Commander in the Pacific theater during World War ll, and his conflict with Pres. Harry Truman during the Korean War, have been the subjects of several books, TV dramas, and a recent motion picture. Less well-known is the fact that the General was an avid student of the UFO phenomenon. He was even obsessed with the subject and he feared that UFOs were hostile invaders from some other planet.

In the wake of the massive UFO wave of 195 7, there were many quiet meetings all across the country. The U.S. Air Force, which had tried to get out of the flying saucer business in 1955 with the release of the Project Blue Book Report Number 14, a debunking attempt, found itself once more embroiled in controversy. The CIA’s Project Windfall, a covert investigation of UFO contactees, was enmeshed in bureaucratic bumbling and confusion. Maj. Donald Keyhoe’s new organization NICAP was tilting at governmental windmills, trying to force the issue and alert an apathetic Congress. The news media and the general public regarded the whole UFO affair as a carnival.

But General MacArthur knew better. In his deep, articulate voice he told the 1958 meeting that he believed an extraterrestrial military force was scouting this planet preparatory to a massive invasion. He felt that we should be working to develop weapons and plans to combat the invaders. As an initiator years, until after MacArthur’s death in 1964. Details of the meeting were kept secret for years, until after MacArthur’s death in 1964. 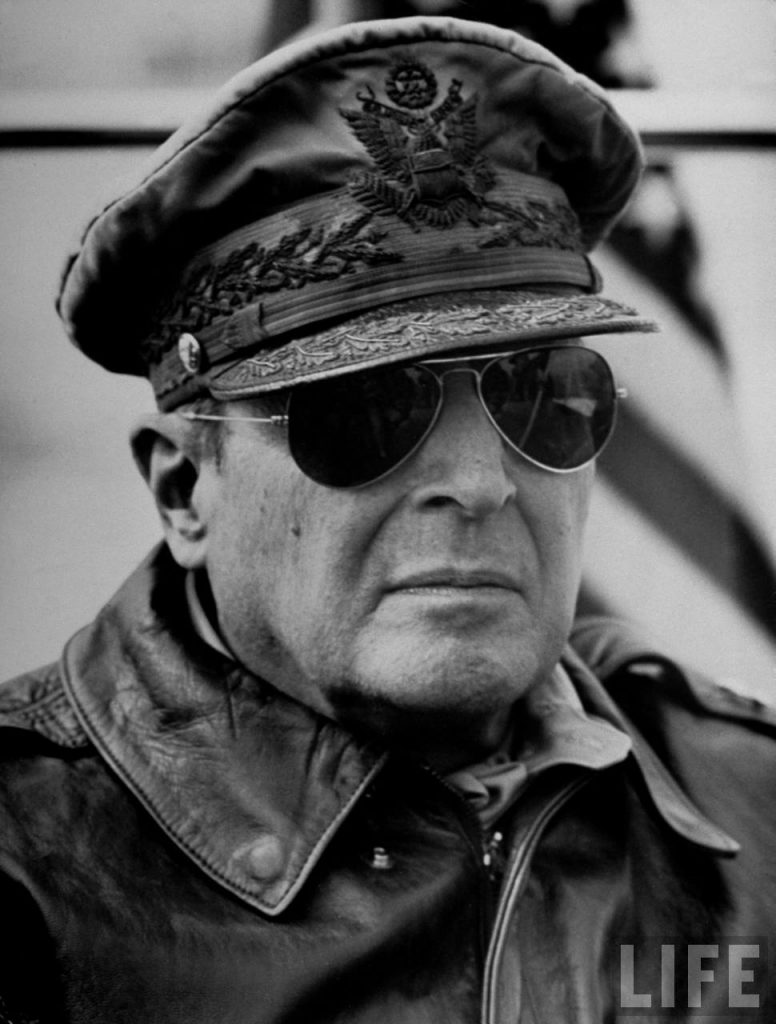 In an interview with columnist Henry Taylor in 1955, MacArthur had already publicly revealed his concern over unidentified flying objects and their possible impact on our civilization. He was then living in retirement in the Waldorf Towers in Manhattan and felt free to express his conclusions that UFOs were real and posed a horrible threat. An arrogant, self-assured man, MacArthur was not afraid to speak his mind. He had crossed swords with Truman when he had blatantly ignored presidential orders during the Korean War. He had graduated at the top of his class at West Point and worked his way up to the post of Army Chief of Staff in 1930, at the age of 50. He was not at all reluctant to assume responsibility, and he didn’t hesitate to stomp on the less competent people around him. During World War ll he built a military empire in the Pacific, and after the war he directed the conversion of Japan to a democracy. So it didn’t bother him that the official U.S. Air Force position was that UFOs were weather balloons, hoaxes, and falling stars. He thought the public should know the truth … at least the truth as he saw it.

What were his conclusions based upon? Military men, particularly generals, are pragmatists. They act on facts, not theories. General MacArthur began to collect facts about UFOs during World War ll. The mysterious “foo fighters” appeared in the European theater in 1943, but reports of their appearances were at first suppressed by military intelligence because they were thought to be secret German devices. German pilots were also seeing the strange objects and thought they were some Allied secret weapon. By 1944, the phenomenon had spread to the Pacific. American ships and planes saw the objects, even shot at them. Incredible “flying submarines,” huge cylindrical objects, rose up from the water and flew away in full view of the entire crews of ships. As in Europe, reports of these incidents were stamped Top Secret and shuffled all the way to MacArthur’s headquarters.

McArthur took a personal interest in these puzzling reports and, thinking they could relate to some Japanese development, he set up a small group of intelligence officers to collect and study them. As the pile of reports grew, the team realized they were dealing with a totally unknown technology. In some cases, American radar had detected gigantic objects, larger than any known aircraft, flitting about the Pacific. Several military planes sent up in pursuit of these things either crashed inexplicably or disappeared altogether. Radio transmissions and radar were frequently jammed in areas where the UFOs were active. By 1945, the intelligence men were convinced-and they convinced MacArthur-that the mysterious aerial objects were of extraterrestrial origin and were hostile.

Paradoxically, other unrelated intelligence teams operating in Europe came to a different conclusion. The RAF’s Foo Fighter investigation, launched by General Massey in 1943. decided the objects were harmless and were probably natural phenomena of some sort. The director of the RAF’s intelligence branch, R. V. Jones, became steadfastly anti-UFO. American intelligence in Europe fared even worse. The reports of American pilots were never centralized and studied, but were simply scattered throughout the massive files. Only General MacArthur and his men in the Pacific had undertaken a systematic investigation, and their findings were jealously isolated from their European counterparts, and even from the Pentagon. When the war ended in 1945, the European Foo Fighters were all but forgotten, but the phantom fliers continued to be seen around the Pacific, particularly around Okinawa and the islands where the U.S. was installing its first atomic age air bases. And those Top Secret reports continued to pile up on General MacArthur’s desk.

A five-star general has considerable power, and MacArthur not only ruled his empire with an iron hand, the tentacles of his intelligence service spread around the world. This was proven by a curious incident in Britain in the fall of 1946. That summer, northern Europe was inundated with “ghost rockets,” unidentified cigar-shaped objects which appeared over Norway, Sweden, Finland, and even as far south as Greece and Morocco. The Scandinavian countries launched full-scale investigations, fearing the “rockets” were of Russian origin. (The Russians had no rockets at that time and most of the top German rocket scientists hap been captured by the Americans.) Soon after the “ghost rocket” wave subsided, RAF lntelli_gence received a report that a rocket had crashed outside of London. It proved to be a complete hoax and was never revealed to the press .. . or anyone else. The intelligence officers who had investigated it were so embarrassed they tried to keep the whole thing secret. But within a few days a telegram reached the RAF Commander. It was from Gen. Douglas MacArthur in Japan and he asked for details on the unidentified rocket that had crashed in England!

Obviously, General MacArthur was tuned into everything happening everywhere, and he was particularly in­terested in reports about unidentified flying objects.

Twenty years later, R. V. Jones re­vealed the story of MacArthur’s telegram in a public speech. Wartime witnesses of UFOs in the Pacific and Europe eventu­ally told their stories to civilian UFO organizations and professional writers compiling books on the subject.

The Korean War brought a new surge of UFO sightings in the Pacific, and many of these reports found their way into print. Even Life magazine devoted con­siderable space to them. The great American UFO wave of June-July 1947 had stirred public and press interest in flying saucers and they had become a human interest subject like sea serpents and Abominable Snowmen. But to Gen. Douglas MacArthur, who had been col­lecting reports since 1944, there was nothing amusing to the endless sightings.

When he retired into civilian life (actu­ally, he was fired by President Truman), MacArthur maintained his interest in UFOs. He collected books and magazines about them and, according to a person who was close to him in the last years of his life, he talked for hours about the threat from outer space to anyone who would listen. In 1962, Pres. John F. Kennedy invited the aging general to the White House and they spent two hours together in private discussion. We don’t know if UFOs were ever mentioned in that talk. Kennedy later said they had talked about Vietnam and MacArthur had outlined why we should never get into a land war in the Orient (whatever hap­pened to that excellent piece of advice?).

Soon afterward, President Kennedy announced that he was going to pour billions of dollars into a space program designed to put a man on the moon by the end of the decade.

One of General MacArthur’s final pub­lic appearances was a speech he delivered at West Point in which he told the young cadets that “the next war” would be fought in space when a united man­kind would battle “evil beings” from some other planet. The speech was widely quoted in the press at the time, but there was no discussion of it and it had no impact. To some, it was just the harmless babbling of an old man (he was 84 when he died). To others, it was a sober warning from a man who had had access to information denied ordinary ufologists, a man not given to uttering casual, unsub­stantiated admonishments. We ignored his advice about Vietnam. Can we afford to ignore this?