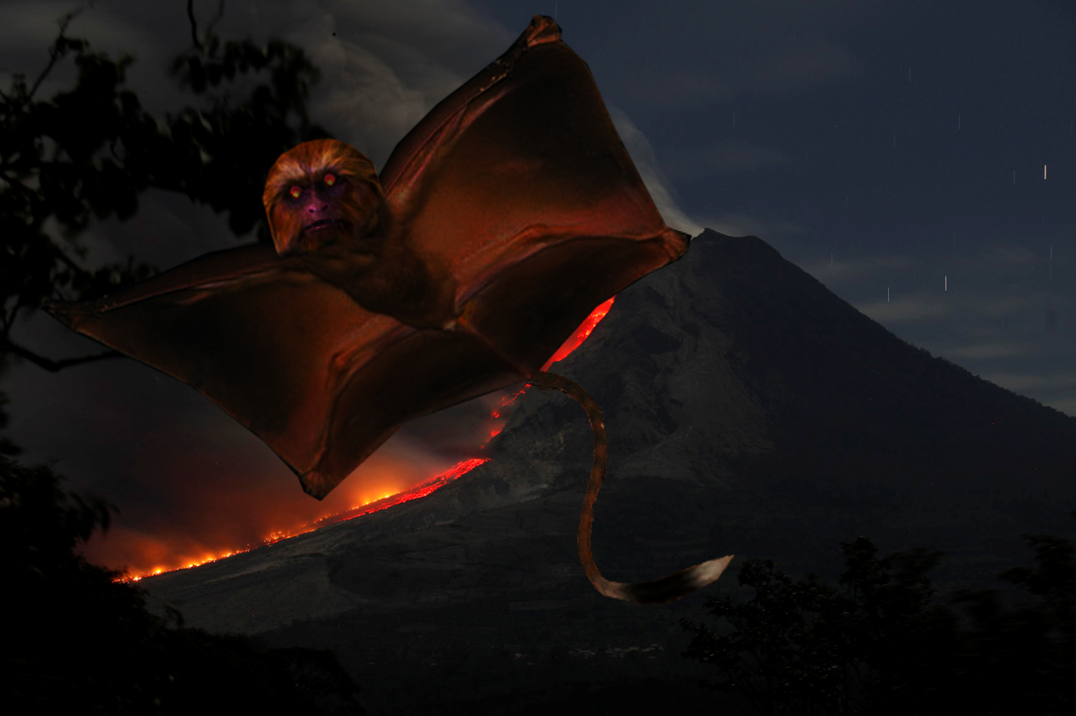 In the Indonesian island of Seram stories persist of a winged creature that is a hybrid of a monkey or orangutan and a bat. The fearsome creature is said to inhabit the mountain of Mount Kairatu, where it carries off its victims to devour. This fearsome beast has been known for centuries as the Orang-Bati.

It is described as having an average height of five feet and possessing black, leathery wings. Its skin is also said to be the same color as blood, and it also sports a thin snake-like tail making for a very fearsome appearance. Its name itself is translated from the Moluccan language, meaning “men with wings.”

The stories of the Orang-Bati have persisted in the island since the 1500s. Many natives would often tell the visiting missionaries horrifying tales of the Orang-Bati carrying off women and children to the nearby mountain where they would devour their victims alive. The natives say that they knew when an Orang-Bati was near because of its shrill cry in the sky whenever it flew above them, or swooped down to take its prey. The Orang-Bati’s cry was described as shrill and mournful, almost like it were some kind of vengeful and mournful spirit.

Sightings of similar creatures have also been reported in the other islands of Indonesia, and even around the world. Notable examples include the Ahool also from Indonesia, and also spotted in Vietnam, the Camazotz of South America, and the bizarre Batsquatch of America. When one visits Seram, it is immediately noticeable that the island is covered with heavily dense rain forests, most of which are still unexplored. It is quite plausible to think that such a creature could inhabit such an area full of thick foliage and trees, where they could easily hide from prying eyes and wait for the next moment to strike. When you factor in the huge, labyrinthine network of caves within the extinct volcano that is Mount Kairatu, it is really quite easy to make a strong case for the Orang-Bati’s  existence.

In 1987 the English missionary Tyson Hughes went to the island on a humanitarian mission to aid the natives in developing more effective farming methods. He had long heard the stories surrounding the mythical beast. He had even gone so far as to tell the outside world about the creature, however he always maintained a healthy skeptical attitude about it, often dismissing it as nothing but mere native folklore. His attitude about the creature changed drastically midway through his stay in the island, when he claims to have actually had a real encounter with the creature. After the alleged sighting Hughes developed a much closer bond with the natives, even after he left. He also continued to chronicle sightings of the beast over Seram’s skies. Whatever he saw on that day, it definitely left a lasting and powerful impression on Hughes.

In August of 2012, a team from National Geographic tried to capture an Orang-Bati for the show Man V Wild. The creature managed to escape, and their research and findings were generally inconclusive.