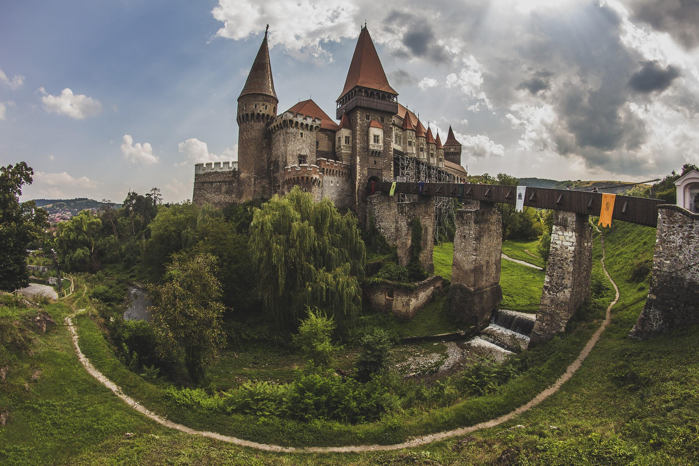 4 Places in Romania That Will Give You the Creeps!

Corvin Castle, Hunedoara
Don’t let the beauty of this magnificent castle fool you. There’s more than meets the eye going on inside the structure.

Also known as Hunedoara Castle, the construction is among the largest castles in Europe, and is regarded as one of Romania’s wonders. It was built during the 15th century by John Hunyadi (Romanian: Iancu de Hunedoara). Over the centuries, it served as both a residence and a strategic fortress.

Even though it’s a stunning display of Romanian gothic architecture, it’s supposedly one of the most haunted castles in the world, with stories of ghostly silhouettes seen wandering through the halls.

Built around 1912 in the country’s capital city, it was originally called “Palace Hotel”. Over time, the building decayed and was closed in 1970. In 1990 it was reopened and became a hostel for students of the Academy of Theatre and Film.

During the 1990s, a young student fell inside the elevator shaft from the 2nd floor. She cried for help to no avail, and died after long hours of anguish.

It is said that her screams could still be heard throughout the night after years from the tragic event.

In 1999, Romanian band Vama Veche released the song “Hotel Cismigiu”, which was inspired by the events that took place inside the building.

The construction was done by intellectual Bogdan Petriceicu Hasdeu, who was devastated by the loss of his only daughter, prodigy Iulia Hasdeu, and built it as a tribute. She spoke multiple languages and excelled at singing and painting, but died of tuberculosis before she turned 19.

Supposedly, the broken father was given guidance about different aspects of the construction by his daughter, whom he contacted through multiple sessions of spiritism. The ornamental structure was completed in 1896, after which Bogdan Hasdeu moved his rituals inside.

Over time, many people claimed to have seen the ghost of Iulia wandering around the property. In 1955, the castle was added to Romania’s Listing of Historical Monuments, and in 1994 it was turned into a museum.

The monument is situated on Bucharest’s outskirts, having not 1, but 2 cemeteries nearby. The railway and airport in the vicinity play a major role in the constant degradation of the monastery.
Before consecration, the church was attacked by turks during the 18th century, who believed it was a military point. The church’s tower fell during 1977’s major earthquake, and is nowhere to be found today.

Besides being abandoned during the plague, some weird events happened around the place – locals claim they’ve seen shadowy figures on the monastery’s walls. Moreover, two horrific crimes occurred close to the church and above all, it’s said that the missing bell can be heard ringing from time to time.