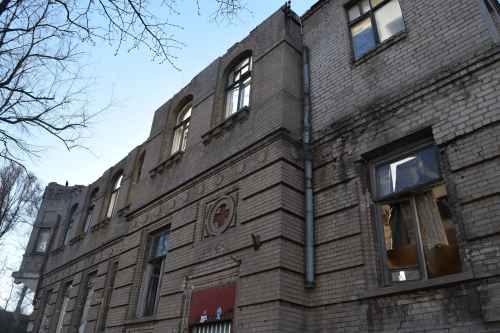 The Cursed Place: A Hospital with Ghosts

Old buildings are likely to gain a fame of ghosts-friendly houses. Let the scientists show us reasonable facts that explain the spirits with the concept of physics. Those immersed into paranormal perception of the world will definitely find out the shots or witness evidence that demonstrate the presence of ghosts. This is the story of an isolated hospital in Ukraine, Dnipro city that is surrounded by the strange legends.

When the Second World War started, the patients here went insane. They had not got any appropriate treatment, and the unbearable pain made them drive up the wall. The panic transformed in a kind of mental disorder, and they killed the doctors. Then, patients used knives to stab each other. This frustrating story gave a hospital a reputation of a dangerous place.

When my grandparents heard a word about this hospital, they got frightened to death. However, it is not only the family legend. The whole city spreads rumors about the so-called cursed hospital. For instance, this hospital was thought to be the place where all the ill people were dying. Moreover, those who came close to this building were warned not to do that. Aged people shared things that are hard to believe but unpleasant to experience: ‘Don’t approach this hospital, otherwise miseries and sorrow might attack you’.

Certainly, such myths made the hospital a place of interest among people of different ages. George who lives nearby told about his special gift to gauge the energetic condition of the place. He claimed to have remained the bioenergetic application in the hospital at night. The camera depicted the dark body of a skinny person who was going here and there. Sometimes the body became transparent. Consequently, such a discovery made a young man think about the ghosts. The next time he invited friends to be staying there in the tents for a couple of days. All of them heard some special sounds as if anonymous person had been coughing. However, the hospital is not functioning now. Indeed, it might have been a ghost.

Perhaps, the strangest thing happened with the friend of George. The latest shared his fears and prompts with Jenny, but she started laughing. ‘You are an adult but still believe in ghosts! Please, stop telling that, you seem ridiculous!’ Jenny used to get on well with her boyfriend, but afterwards their couple separated. During several months she could not find out anyone appropriate for her. George is assured that it is the revenge of ghosts: ‘One should not laugh at the paranormal world’.

I asked psychologist to explain the possible phenomenon, and he gave me the sensible reasons:
– When the hospital was functioning, there was the biggest number of deaths in the city. Moreover, the underground floor included the department for desperately ill patients. For sure, it might explain why people are so much afraid of this place.

However, when I asked the specialist on bioenergetic studies, he replied in another way:
– All the actions and emotions that concentrate in a particular place create its egregore. If the sadness and grief dominated over other feelings in the hospital, it affected atmosphere badly. This might be the possible explanations why the egregore in these surroundings is so bad that people feel miserable and frightened.