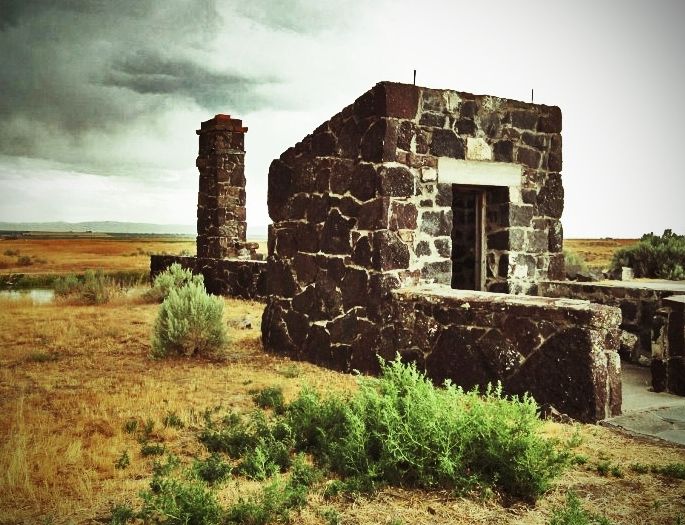 A Devil’s Triangle in Idaho

T-shirts declaring “I travelled the Bermuda Triangle” are a hot souvenir item in the Bahamas and sooner or later there will probably be T-shirts announcing “I survived New Jersey” and “I got out of Idaho alive”. Warp zones with high accident rates and frequent disappearance are not confined to the famous triangle in the Atlantic. The entire North American countryside is dotted with areas haunted by weird manifestations and strange anomalies. Airplanes have disappeared in the placid skies of New Jersey and the calm, civilized air space of Illinois. Automobiles vanish along midnight roads everywhere. Your chances of disappearing into oblivion while walking your dog in Kentucky are as great as a seaman’s chances of being swallowed up in the notorious Bermuda Triangle.

Every community in the country has at least one “Dead Man’s Curve” or hazardous stretch of highway where several terrible accidents occur each year. Most of these places are well known to the local inhabitants and carefully marked with warning signs. But every state also has a patch of highway, usually a straightaway free from ordinary hazards that produces several fatal accidents each year, much to the bewilderment of the local authorities. A few years ago the late Ivan T. Sanderson was called upon to investigate such a warp zone in New Jersey. We know of similar places in New York and several other states. In West Virginia we one investigated a strip of straight road where, for no discernible reason, drivers were always veering into a river. Most of them drowned. Those who survived could not explain their actions.

The 10 mile stretch of Interstate 15 between Inkom and McCammon, Idaho, is known locally as a “mystery road” because so many automobiles have suddenly and inexplicably crashed while travelling down it. Two people were killed there in a single month last summer, and there were four accidents within as many days that July. The Idaho Highway Department and the State Police have been concerned with the number of accidents along this seemingly harmless length of road for several years. Rumble strips designed to shake up sleeping drivers have been installed along with special guard rails, patches of light and dark coloured pavement, and other safety devices. The police patrols have been tripled there. Still the accidents continue.
Six years ago the police began taking statements from the people who happened to witness the accidents.

In most cases, the doomed drivers were proceeding normally at moderate speed when, for no apparent reason, they chose to swing off the road, often chose to swing off the road, often with fatal results. In one case, a truck carrying two men was followed by a car filled with highway engineers. Suddenly the truck left the road, slammed into some rocks and flipped over. The two men survived with no idea of what had happened to them. The engineers in the car behind them saw no reason for the accident.

Other survivors of crashes on the mystery road told the same story. One minute they were driving along leisurely. The next, they were off the road and upside down with no recollection of what had happened. Medical tests of the victims have yielded inconclusive results. The drivers were well rested and healthy. The police even tested for unusual gases in the area, and a wind speed study was carried out. No explanation for the accidents has been found and none of the safety measures have worked. Probably the only solution is to build a bypass and close Interstate 15’s haunted 10 miles forever.

With millions of people travelling our highways each day, it’s not unusual that Driving Unknowns (DUNKs) are becoming more and more common. UFO literature now abounds with reports of the strange things that happen to people in automobiles. A majority of our monster and tall, hairy humanoid reports come from solitary motorists, usually those driving alone along country roads late at night. In the average account, the car comes around a bend and suddenly encounters a landed UFO or a monster shuffling across the road like an animal seeking the other side. Many of the classic episodes in the annals of ufology began this way. Add to this the growing number of stories from witnesses who innocently stopped to aid what appeared to be a fellow motorist in distress only to be suddenly confronted by Men-In-Black types who grimly warn them too keep quiet about something they previously saw. It is easy to conclude that driving can really be hazardous to your health.

Some people are susceptible to a form of hypnosis when driving, particularly on long trips. They actually lapse into a sort of trance although they generally remain in complete control of their car. Trees or telephone poles whizzing by along the side of a road can induce such a trance. A barren straightway where traffic is light, such as a lonely desert road, can have the same effect. The first thing that is affected is the sense of time, just as the sense of time is distorted in a real hypnotic trance. Prof. Graham Reed, a Canadian psychologist, calls this a “time gap experience” because the driver can cover many miles safely in this condition. They don’t snap out of it until they reach an intersection, a town, or a sudden change in scenery. Then they find they can’t recall having driven those miles and they think the trip was remarkably short until they glance at their watch. While this seems like a genuine DUNK to the driver, it is really not unusual. Investigators often waste much time and paper recording this commonplace experience.

On the other hand, there are many DUNKs and time gap experiences which cannot be so deftly explained. Idaho’s mystery road is too short to induce such trances. Yet from the statements of surviving victims of the phenomenon it is clear that they were entranced by something. Whatever that something was, it interfered with their conscious minds and forced them to drive irrationally.

Several years ago a British case received considerable publicity when a driver reported that his headlights suddenly seemed to bend into a nearby field at a spot where several strange accidents had previously occurred. Light can be bent by a powerful gravitational field but a force strong enough to bend a light beam would certainly be strong enough to be felt by the driver, and it would certainly pull the car itself off the road. We have no reports of bent headlight beams from Idaho.

There are other possible explanations for DUNKs, though. Radio waves, particularly microwaves such as radar beams, affect the human body and brain in many ways. A radar sweep from an airport or weather station could, when conditions are just right, affect a driver and he might instinctively and unconsciously swerve his car in a futile attempt to get out of the beam. Doctors and radiologists have been aware of this for years, and there are frequent studies made to monitor this electromagnetic pollution caused by the rapid spread of microwave relay towers and radar stations. Some people are so adversely affected by these radio waves that they become violently ill. Others develop great thirst because the waves dehydrate the body: they literally cook you from the inside out.

Pilots who have survived harrowing experiences in the infamous Bermuda Triangle, have reported that their radios and instruments went haywire and they felt physically and mentally disoriented, clues which point to electromagnetic pollution. But since there are no relay towers or radar sets out in the Atlantic, what could be the source of these difficulties?

We know that beams of energy on all frequencies constantly bathe the Earth from space. Much of this radiation is trapped or at least weekend by the Van Allen Belt and the planet’s atmosphere. But some of these beams get through intact and sweep over our planet in much the same way that our radar beams have explored Venus and Mars. Ancient astrologers were aware of this and they based their science on their fragmentary knowledge of these “rays”. Could it be that someone on a distant planet is examining our globe with radar, and occasionally when a human is caught in one of these probes he drives his car off a cliff or dives his plane into the ocean?

Many motorists have experienced bizarre distortions of time that can’t be explained by psychologists or radiologists because they have physically travelled great distances in impossibly short periods of time. In a number of well documented instances, airplanes have also passed through these inexplicable time warps. Such distortions of space can only be accounted for by some direct, mysterious rearranging of our physical, three dimensional world. If you draw two dots on a piece of paper they remain at a fixed distance so long as their reality – the two dimensional world of the paper – remains static. But if you fold the paper you can bring the dots closer together. By folding it, you have altered its physical state. Space itself can be folded in upon itself so that the immediate reality of airplane or car is altered and the seemingly fixed distance between points A and B is change. Machines and people caught in these space warps also experience a compression of time.

There is now strong evidence that UFOs are surrounded by a force field which exerts a strong influence on the space time coordinates of our reality. It is not a gravitational pull in the accepted sense of the term, yet it possesses some of the characteristics of gravity. The headlights of that car in England were diverted by such a space-time warp. If it had been stronger, the car and its driver would have probably passed through a spatial distortion, as in so many other cases.

While UFOs usually get the credit for DUNKs, it is possible that there wandering warps are a natural phenomenon and that the UFOs have learned to utilize them. If our scientists would go out into the field to study this phenomena we might also find a way to take advantage of these natural anomalies. We might discover we can hitchhike on them and travel from New York to Los Angeles in seconds. The logical place to begin such research is any one of the hundreds of mysterious roads like Idaho’s Interstate 15. Perhaps if we learn why perfectly competent drivers suddenly run off the road we can also learn how to eliminate roads altogether, and with them jet engines, rockets, and space shuttles.