Tulpamancers: How the Spiritual Practices of Buddhist Monks Became a Play of Children 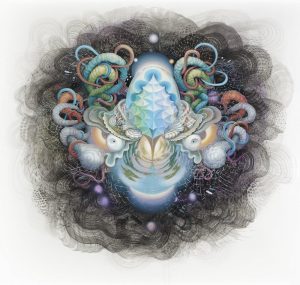 It is widely believed this story has started from the social media. A couple of years ago the teenagers found themselves involved into creation of alternative multiple personalities. In the century of technologies there is no difficulty in making virtual friends that is going to use one language speaking with the Internet user.

Creature from the depth of the subconsciousness

Mary, 14, shared with me her discovery. In case one has been persuading himself for several days to get an imaginary friend, it appears in reality. Mary is convinced:

In the social media there are several groups dedicated to the new movement. One of them offers such a description: ‘Tulpa is the dearest thing in the world. It will never betray. On the opposite, it will always understand, listen to your problems, calm down and support’.

The further description throws off kilter:

‘One will be able to see, hear, touch, and smell the tulpa as well as any ordinary people. Tulpa is the caused hallucination from your mind, an absolutely sensible creature and assistant’. I remember myself having electronic games in the childhood that allowed to make a character. They needed caring and feeding. This character was young, then older, and, finally died. The short term included all the life cycle. It seems that the idea to create an artificial multiple personalities should be the part of the same story. However, how not to go out of control?

The adherents of the new movement are convinced: those who stand against the creation of tulpa are afraid of unknown space. Well, they must fling caution to the winds and let go all the obsolete views getting the access to the new sources. Yet, is it so safe for children mental system?

Are you friend or foe?

The organizers of social media groups are persuaded that a person who practices tulpa creation will be able to cope with the fear or other mental problems articulating positive affirmations. By the way, if tulpa does not work out and forgets the answer at the exam or gives wrong advice during the friends’ argument, it does not mean it is inable to act. The people who put forward ideas of tulpa claim: ‘It is not tulpa that is mute. It is you who is deaf’. If one person does not want to create an alternative personality, the teenagers call it ‘parrotry’. Time after time, the masterminds of this movement repeat: ‘The roots of fear are in the lack of knowledge’.

Some children who try to get on well with tulpa even argue with their imaginary characters. Ann, 12 years old, tells:

Finally, we decided to consult with the doctor-psychotherapist, Candidate of Medical Science, consulting psychologist, Elena Strokova: