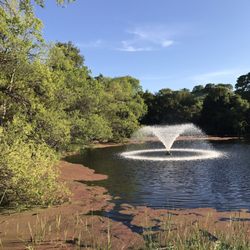 I recently came across a rather interesting story about one of the truly beloved parks of our area and thought I would share it with you.

The story was reported by MikeA and involves the Hidden Valley Park, located just off Center Ave. behind Hidden Valley Elementary.

MikeA, and formerly avid fisherman of our secret fishing hole decided one summer afternoon to try his luck in the secluded lakes behind the school.  He reports that the area has always held uneasiness for him, especially around the rope swing, but since he had caught trout and bass there he continued to fish the area.

Having settled down for a nice afternoon of fishing, he decided to fish just below the large tree with the rope swing, which he felt a presence watching him.  He described the feeling as one of being slightly ill and light headed.  So he decided to move to another location near the water fountain.

After some period of time, and not much luck in the area, Mike decided to move to a new location further down towards the park.  Now having been a fisherman myself, choosing the right location at the right time of day is critical. So having spotted that new location he was on the move.

The only issue is that to get there he must again pass the large tree with the rope swing.  While walking towards it he again started to get the uneasy feeling of being watched, as though a person was standing directly behind him.

Now 7 pm, Mike was hot onto the trail of a bass and had been working on luring the fish for some 15 minutes when he noticed something white out of the corner of his eye moving through the reeds about 30ft away from him. But keen on catching that fish Mike ignored the white object he had seen and as many of us would he calked it up to a bird or some other animal, which lives in the general area.  The fishing continued for about five more minutes when he again saw the white object.

At this point, Mike reports that he became quite scared and decided his fishing expedition was over and he thought he should “get the heck out of dodge.”  But as he was putting his rods away and reeling in the remaining fishing line, he decided to again take a glance in the direction of the mysterious object.

What he saw, to his shock and amazement, was a small child staring at him from the reeds.  As he focused on the apparition, the ghostly figure ran another 10ft to another set of reeds.

Mike reports, “When it ran I remembered it had all the characteristics of a child running but had not face was all white and blurry.”

At which point, having been thoroughly scared by his paranormal encounter, Mike ran at a steady sprint back to his car trying hard to look straight ahead. He reports that is the last time he ever frequented that pond!

So if you too have a summer afternoon free and wish to make your own ghostly expedition to the fishing hole, bring your rod, reel, and a fishing license!  But don’t be surprised if fish aren’t the only thing you catch there.  The fishing hole is located directly behind Hidden Valley Elementary.  Simply park along the street or in the school parking area then head out from the entry point past the community garden.  The pond is off to your left, you can’t miss it, but don’t be caught there after sundown as the Martinez Police Department does regularly patrol the area and they will be asking for more than your fishing license as the park closes at sundown.

Mike’s original report, as well as many others, can be found at http://www.ghostsofamerica.com/9/California_Martinez_ghost_sightings3.html