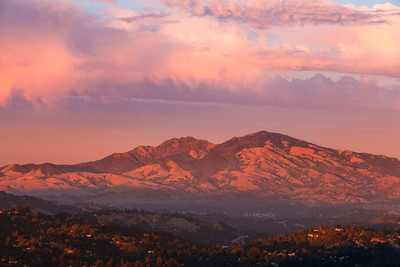 The Mountain of the Devil, enough said…

There is nothing more imposing in our valley then the peak of Mt. Diablo, the so-named mountain of the Devil. Its cloud-shrouded peak, at 3,854ft, dominates our skyline, our imaginations, and for some our worst fears, because like so many things in our area it too is haunted. Haunted by something otherworldly, and to some fearsome.

The name, Mt. Diablo, is believed by some to have originated during the 1805 escape of several Chupcan Native Americans who seemingly disappeared into the mountain prompting the Spaniards giving chase to name it “Monte Del Diablo” or the “thicket of the Devil.” General Mariano Vallejo later changed the name to Mt. Diablo, but it was the Bolgones Native Americans who cast an even more ominous shadow over the Devil’s mountain. The Bolgones believed Mt. Diablo was the abode of their spirit of the underworld, PUY, who they believed inhabited the mountain which also served as a gateway to Puy’s domain.

As far back as the Spanish occupation, it was whispered by soldiers that Puy fought alongside the Native Americans as they struggled against the occupation, taking the shape of a demonic black panther and haunting the soldiers as they fought. In some cases following them back to their garrisons and haunted their dreams.

It is that very same demonic black panther, the spirit Puy, or maybe the even the Devil, that is said to still haunt the mountain and has continued to be reported at various times throughout our local history. According to legend the panther is still very much haunting the thickets and slopes of the mountain today.

Campers on the mountain have been known to see a spectral black panther coming into their camps and harassing them, prompting much fear and concern although no attacks have ever been reported. After the sightings, intense searches of the area by authorities produce no tracks or sightings simply camps full of scared occupants, touched by a brush with the otherworldly.

The stories of our fair mountain do not end simply with a demonic black cat haunting the mountainsides and harassing campers. It has also been reported, by some, that Marsh Creek Rd. a desolate windy road which wraps around the base of the mountain is the home to a “Ghost Cop” which is said still patrol the area. Pulling over speeders, the reckless and unsafe drivers. But once you have been pulled over no ticket is given, and as confusion sets in a seemingly empty police car simply pull away to continue its ghostly patrol forever seeking out the unsafe drivers in a ghostly attempt to protect and serve, even from the great beyond.

Still, other stories haunt the mysterious mountain and its foothills. Tales of gold and silver treasure also dominates its history, and it has long been a destination for treasure seekers looking to strike it rich by finding the lost treasure of Dr. John Marsh, the namesake of Marsh Creek Rd.

Dr. John Marsh, a California pioneer and some say California’s first American Doctor, was murdered in 1856 on his way back to his home in Martinez, after hiding a cache of over $40,000 dollars in gold and silver near Marsh Creek. Did the murders find the money? Apparently, they did not find the cache, and what of its present location? Dr. Marsh took that secret to the grave, but one can only imagine the spirit of John Marsh watching over the cache. So to those intrepid treasure seekers out there, be careful your search may result in a discovery of a different kind. Despite the circumstances, even now treasure seekers comb the mountainsides in search of that hidden cache.

Spectral Panthers, ghostly policemen, murder and hidden treasure are but a few of the mysteries, which surround the Devil’s Mountain. Is it a gateway to the underworld? Or just the final resting place for the restless spirit of a patrolman on his long nightly patrol? We will never know, but you may soon find out!

So grab a friend and journey to this mysterious mountain, bring a camera and be aware that the weather changes quickly at its peak so bring warm clothes. Don’t forget your camera in case you have a brush with the paranormal. Drive carefully, or it may not be a spectral policeman who pulls you over, and you may get a very real ticket.