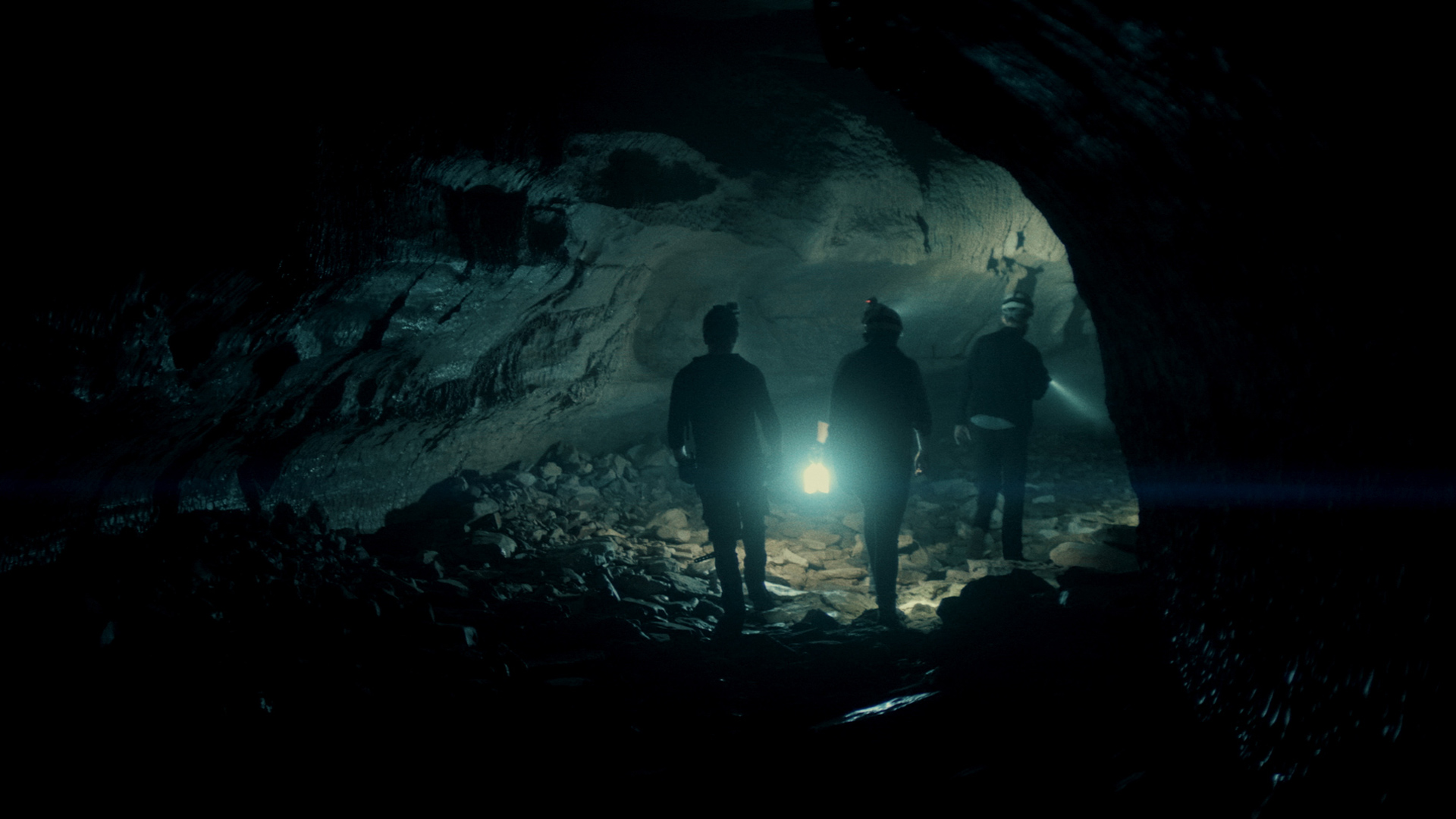 For me it all started one afternoon. I got a phone call from my friend Taylor urging me to watch this show called Hellier. Now I had been hearing about “Hellier” for months and promptly informed him I am tired of the Paul Hellyer story, I’m not interested, no way no how… Taylor, a bit exasperated says “no, its not Paul Hellyer is Hellier, KY.” So I promised to give a try, and I was hooked like most people at this point and the best part is I was already familiar with some of it as the publish of the Complete Cipher of the UFONauts (referenced in the show).

From the very beginning a few things really bothered me about the story I was watching unfold. Obviously top of mind for everyone, including the Newkirk’s, who the hell is Terry Wriste? We know some things about him from Greenfield and his interviews but Wriste is mostly an enigma (though I have been told what one of his favorite foods is). The other things which get me are Why the Newkirks? Why Hellier? What’s Wriste doing? I mean it can go on… but I’ve given it a lot of thought and did some research and I think I can answer, or at a minimum provide a damn good theory, on a couple of these. So in this first article I will attempt to show the reasons why I think Wriste choose Hellier, and Wriste chooses everything btw.

So the $100k is why Hellier? Is it because its known for Kentucky Goblins? I really don’t think so. It’s my belief the reason why Hellier is a lot more arcane then Goblins. 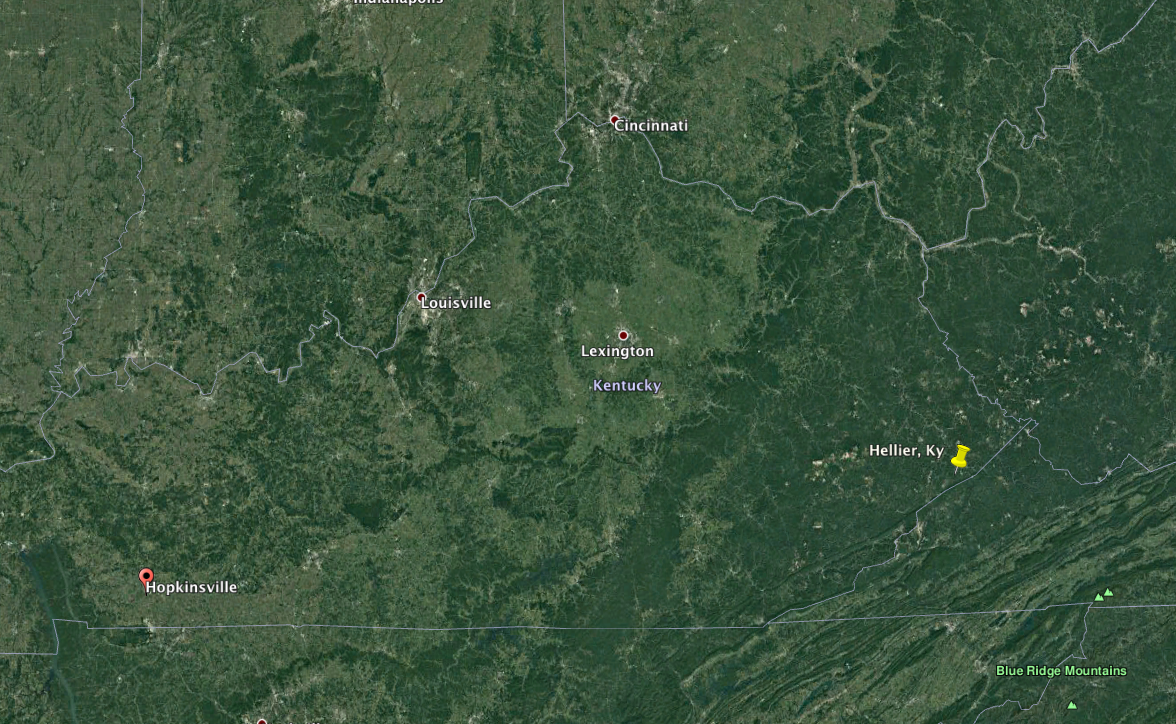 Kentucky Goblins AKA The Kelly-Hopkinsville Encounter

The most famous, but not only, Kentucky Goblin encounter is The Kelly-Hopkinsville Encounter which took place in Hopkinsville, KY in August of 1955. A total of 12 people were involved including five adults and seven children. So the story goes that at some time during the night a spaceship, of the saucer variety, landed near a remote farmhouse owned by Elmer Sutton and started terrorizing the people inside. This resulted in a running gun battle with Elmer Sutton and Billy Ray Taylor opening fire on upwards of fifteen short dark figures who reportedly kept coming into the doorways and peering through the windows. The engagement was so severe that it resulted in twelve police and an additional four military police responding to the farmhouse. By the time the police had arrived the event was seemingly over though it appeared to restart again at 03:30AM which resulted in the farmhouse being abandoned. 03:30, interesting number (it’s a 33) right? Yup…

So why do I think this Hellier thing is not Kentucky Goblins? I mean it sounds kinda like what “David” reported right? It does, and eerily so.. Like very very similar, that and the fact that David claimed Wriste had suggested they call the Newkirks, only to find out later that “David” didn’t exist. The other reason I think it’s a suspect linkage is that the Kelly-Hopkinsville event took place on the other side of the state in a very different set of conditions. Now what I do find interesting is that the highpoint of the event was at 03:30 in the morning, again a 33, and that the tracks etc. are consistent with the tracks “David” had sent the Newkirks. Do I think either case is fake? Actually no, but I don’t think that’s the link we are looking for. Instead I would suggest to you the Goblins are bait, one of many, Wriste is using to push what he is doing forward. They loose interest, boom another goblin story. Don’t get me wrong I think the goblins are a part of this, as they themselves discovered when they were told the goblins were gatekeepers. That message will become VERY important in our next article but not for this one. Let’s just say the goblins are the symptom not the disease.

So I’m back to why Hellier? If its not goblins what gives?

The thing about Forteana or paranormal events is that they are often tied into the natural sciences. For example in areas of heavy quartz or crystals there tends to be more psychic or paranormal activity.  So I started to look there.

One of the first places I looked was at the magnetic Anomaly map. 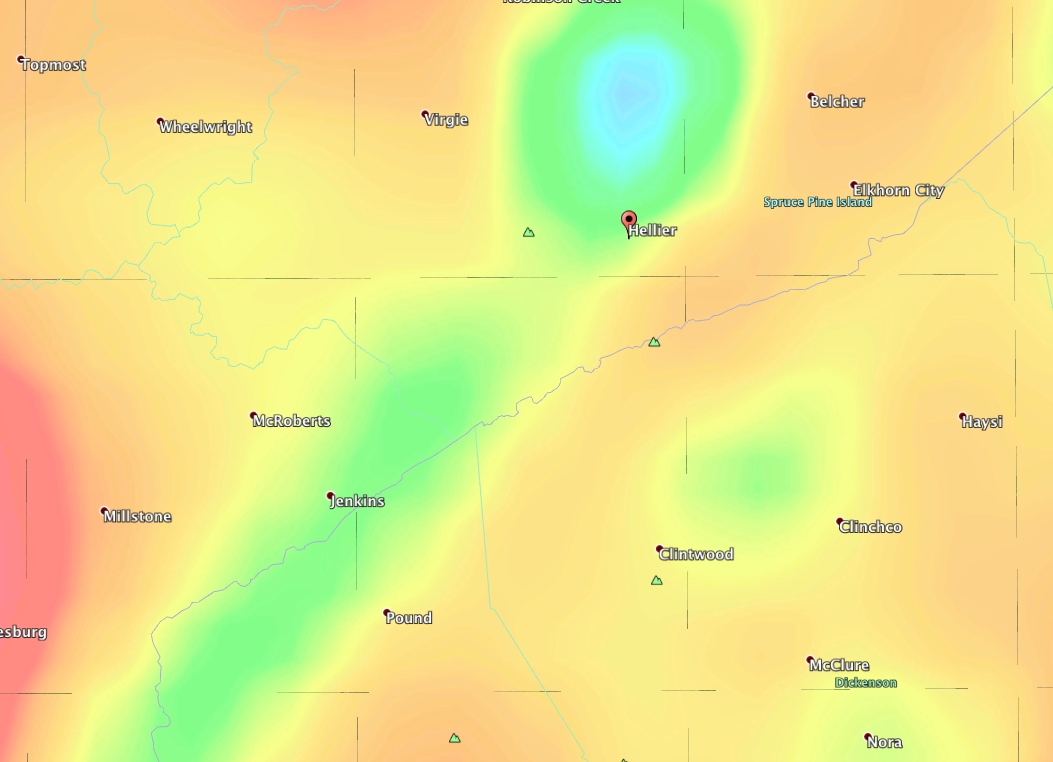 If you look at the map you will see Hellier is in a green band and what we believe is the location of the cave is also in a green band but both are surrounded by magnetic anomalies.  In the case of the cave, after you reach the entrance you quickly start to move into a yellow then red field the deeper into the cave you go.

The next thing I looked at was radiometric surveys of the area. 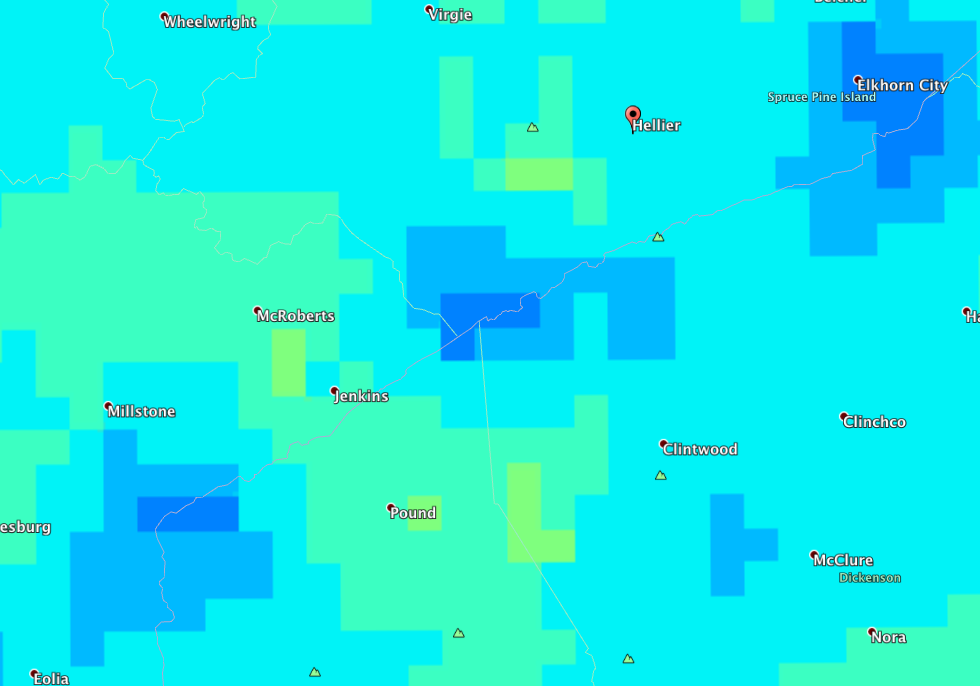 Again both the cave entrance and the town of Hellier were in medium zones. Then I ran the Gravity Anomaly survey with the original Mothman sightings and something began to change. 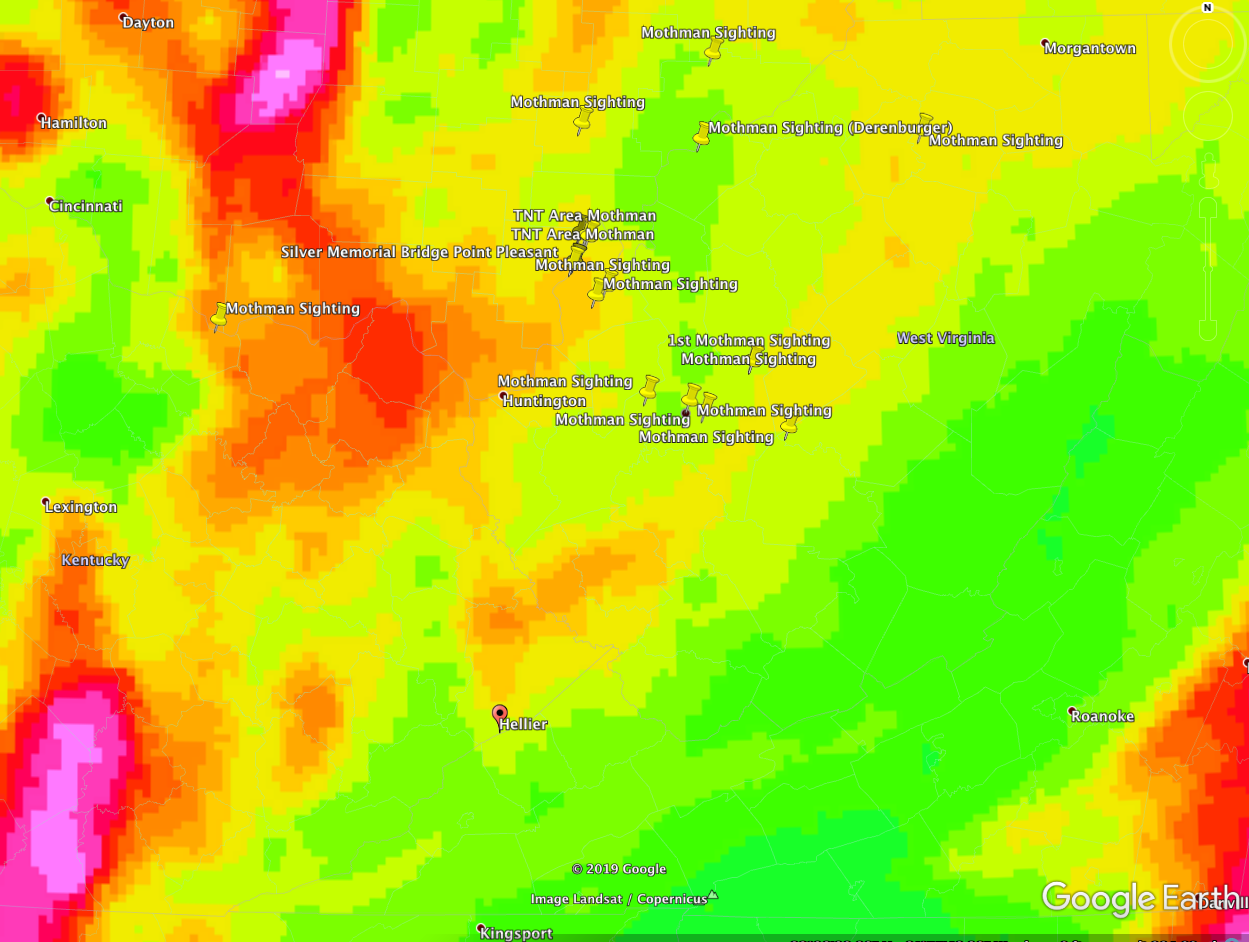 One of the things I noticed very quickly was north of Hellier it started to get very pronounced and active.  As you head north from Hellier towards Point Pleasant there is a kind of trough  that exists.  You can also see there are several fairly intense anomalous zones around Hellier. So I got to thinking ok why is that? Well it turns out there are a couple of really interesting things going on here..

There is a glacial vein of possibly placer type material which runs from Hellier to Point Pleasant. That vein, if it has crystals in it, would be a conduit or could be a conduit. 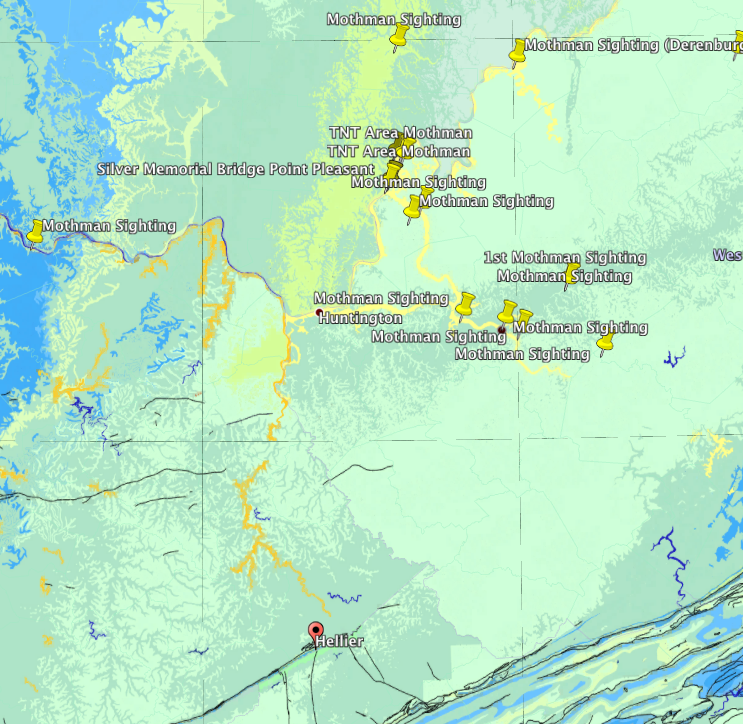 The second thing I quickly discovered is that the Cave entrance and Hellier both sit on fault lines. 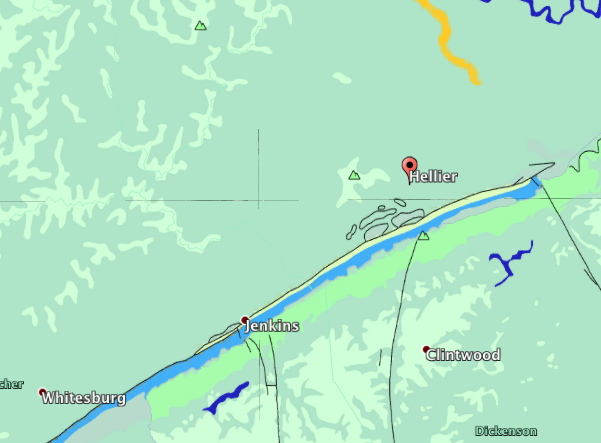 This is super interesting because it is well known that paranormal and Fortean commonly occur near fault lines.  Some people believe it is because the energy from the tectonic stress and relief of that stress causes paranormal events or at least powers them.

In a recent research paper by Lindsey Danielson, “Using GIS to Analyze Relationships to Explore Paranormal Occurrences in the Continental United States,” Danielson points out:

The model returned a total of 1,030,036,346 acres (416,840,920 ha.), which is about 5.2% of the continental United States. Results suggest most suitable locations are located in the New England area and along the Appalachian Mountains, the north and south regions of the Rocky Mountains, as well as the west coast. The likelihood of paranormal activity manifesting near many of the environmental criteria (running water and faults) is already high because of the large density of those features in the United States. Further research is needed in the paranormal field to determine the distance from the environmental criteria paranormal activity can be and still manifest.

This shows that while the research study shows there is not necessarily causation for hauntings, these regions are VERY active with Cryptids and other “Ultraterrestrial” forms and I would suggest that the Hellier team is dealing with Ultraterrestrial or occult forms.  Many times these interactions have taken place in areas of limestone and quartz deposits. In fact Danielson did see an increase in areas of limestone concentration!

Whats interesting here is that Hellier, KY sits along a large KARST deposit.

KARST is defined by the Google dictionary as:

…landscape underlain by limestone which has been eroded by dissolution, producing ridges, towers, fissures, sinkholes and other characteristic landforms

That includes cave structures which the whole area is littered with. But the most interesting part of this is the fact that in the area around Hellier all the way to Point Pleasant is sitting on a massive limestone shelf.  Even more interesting is that apparently on top of that limestone is a large deposit of Zinc Nitrate.

The Wikipedia defines Zinc Nitrate as:

Zinc nitrate is an inorganic chemical compound with the formula Zn(NO3)2 . This white, crystalline solid is highly deliquescent and is typically encountered as a hexahydrate Zn(NO3)2•6H2O. It is soluble in both water and alcohol.

So what does this mean?  Well we have limestones, maybe quartz, lotsof crystals of all kinds, crystalline zinc, fault lines, and all kinds of anomalies.  Frankly it seems to be the perfect spot!  Why is it the perfect spot?  Because it is a massive psychic energy, etheric energy, energy, amplifier.  Essentially the things the Hellier crew are doing are being amplified by the environment.

I believe this is why Wriste sent them there and is keeping them there, but I don’t think thats where they will end up. I’ll talk about that… in another upcoming article. I also must say that I have received what essentially amounts to a confirmation of these theory from a secret group.  I know that sounds nebulous and it is but it is never the less true.  As Hellier goes further we will learn more but I believe this is why Hellier.

Interview on Hellier Location on Spaced Out Radio

Listen to “Dec. 23/19 – Synchronicities with Olav Phillips” on Spreaker.