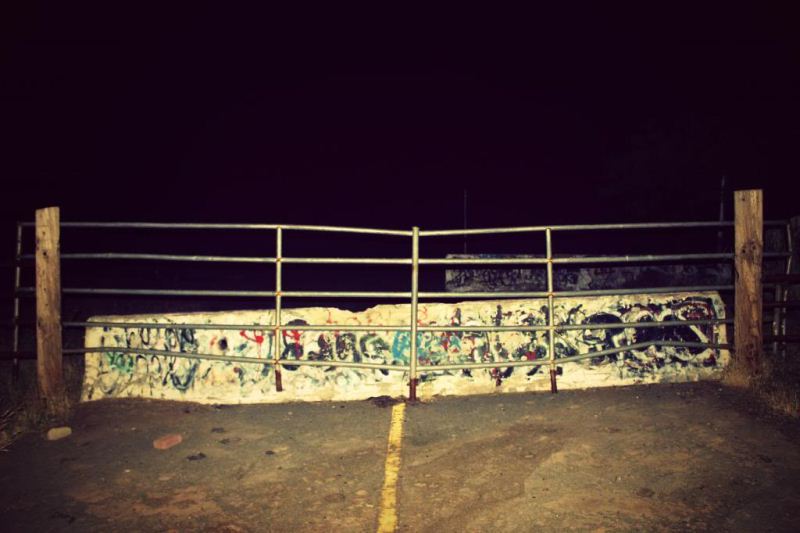 When you think of our area, and what we are known for, there are many things that come to mind. The Golden Gate Bridge, Joe DiMaggio, even the iconic martini drink was known to have come from Martinez. But our area also has another more infamous claim to frame.

It has long been rumored that the greater San Francisco Bay Area posses not one but three purported gateways to the underworld. The majestic Mt. Diablo is believed to be one with a second located gateway in a non-descript location in historic Benicia and the third? Well, the third is supposedly located along the same stretch of lonely road as Gravity Hill. This diabolical location has long been the source of myth and folklore in our area.

So tell me more you say… and so with that down the rabbit hole, we go.

Once you pass Gravity Hill if you continue up Empire Road aways you will come to a small stucco wall with a large amount of spray-painted graffiti and a gate beyond.

The gate beyond is the portal to a strange dilapidated building. It’s a bit of a hike, and not such a nice place but if you want an experience this is the place to go.

Over the years there have been persistent rumors that this building was the site of an old Insane Asylum, a very brutal place if the stories are to be believed. It was at this location the many people were killed or murdered, and it is one of the more haunted locations in our area. The kicker is that, as you would imagine of such a brutal place, it is haunted not so nice spirits who do not enjoy your presence haunts it.

For more than a decade, that I’m aware of but reports probably go further back, there have been incidents around the area. Would be investigators have reported that objects were thrown at them as well as the investigators being pushed, pulled and hit. It is also known that the screams of the damned souls of this building have even been heard and I suspect EVP’s of the building would produce some very interesting results.

It has also been rumored for some time that a local coven of dark witches had used this location for more nefarious and diabolical uses, at one point even opening a gateway to hell amongst other things. But one thing is for certain, this is not a nice place, and if you visit it expect the unexpected.

A word of warning to the would-be visitor or investigation of the unknown. While none of these stories have been confirmed as a matter of course, there is a darkness to this place which is both enveloping and frightening. Once you enter you cannot escape a feeling of dread.

It should also be pointed out that this location, located on Empire Mine Rd. in Antioch, is privately owned so before making any journey to this location you should, of course, discuss your investigation with the property owner or you will have another unexpected visit of the very police kind.

If you do go to this place, bring a flashlight and a friend, ghostly adventures should never be done alone, and don’t forget a tape recorder as I’m sure you will get some most interesting EVP’s.