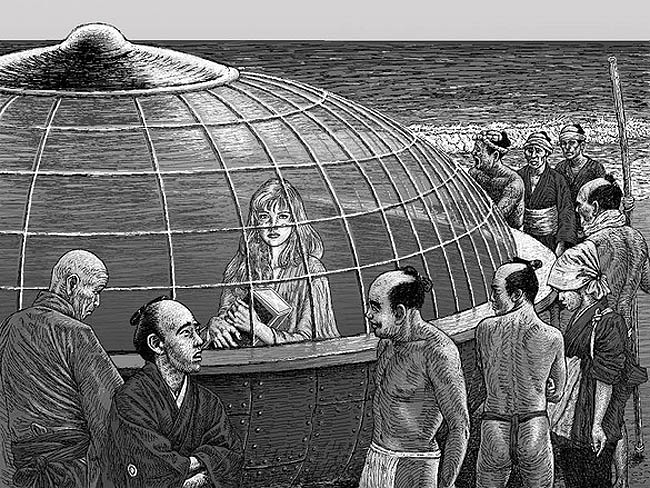 UFOs In Japanese Folklore And The Mystery of Utsuro-bune 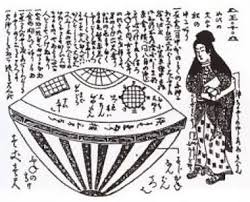 With all the UFO related hubbub kicking up as a result of an article published last December by The New York Times regarding the existence of a secret Pentagon UFO study program and, more recently, the release of yet another Pentagon video of a UFO encounter, foreign governments are under increasing scrutiny and pressure from their citizenry to come clean and reveal what, if anything, they know about the UFO phenomenon.

Such is the case in Japan where, on February 27, Prime Minister Shinzo Abe’s Cabinet issued a statement denying a UFO threat and stating “their existence has not been confirmed” and “we have not made any particular consideration of how to respond should one fly into Japan.” The statement came in response to an inquiry made by Seiji Osaka, a member of the Lower House opposition Constitutional Democratic Party of Japan.

There’s little surprise that the government there has chosen at this time to not lay its UFO evidence out on the table for all to see, if such evidence does exist. This is and has been the M.O. for governments round the world since the UFO flap began in 1947. Nonetheless, the necessity for such a denial speaks volumes regarding ever increasing occurrences of sightings and encounters with UFOs, and the need for governments to quell concerns.

Indeed, the UFO mystery goes way back, in Japanese culture, and is embeded in Japanese folklore itself. We shall, in this article, take a closer look at some such curious cases, starting back at the dawn of the Industrial Age.

In Japan, during the early 19th century, a series of unusual paintings appeared, by a variety of artists, from different provinces, which share a similar theme — that of the mystery of Utsuro-bune.

Depicted in all these paintings is a young woman, sometimes seen with red hair but always pale-skinned and beautiful. Nearby sits a spherical object, referred to as the Utsuro-bune (“hollow boat”). Though rendered with some variation by differing artists, this object is invariably round, covered, large enough to fit at least one person, and fitted with panels, or some kind of window opening.

The paintings tell of a legend, and the story goes like this: In the year 1803, there drifted onto the northern beaches of Hitachi province, in modern day Ibaraki prefecture, a large disc shaped object. A group of local fishermen found the object and described it as being made of metal, with crystal windows. Some said the object looked like a large incense burner.

Upon looking into the windows of this unusual ship, the fishermen could see strange symbols written on the walls but, most surprisingly, they discovered a fair skinned beautiful woman inside, wearing a garment made of some unknown fur or fine fabric. When the woman emerged from the ship, they found they could not communicate with her, for she spoke in an unknown language. Nonetheless, the woman appeared friendly enough, though she clutched a mysterious box which she kept to herself.

One version of the story states that the woman stayed on in that province where she landed, and lived to a fine old age. Other versions suggest the fishermen were quite spooked by the appearance of this stranger and thought it best to load her back onto her ship and push her back out to sea, wherein she drifted until landing on other beaches, evoking similar responses of shock and suspicion from locals along the way.

The legend of Utsuro-bune comes to us from a variety of sources, the first one appearing in 1825 in Toen shōsetsu (Tales from the Rabbit Garden) by Kyokutei Bakin. Another version appears in Hyōryū kishū (Diary and Stories of the Castaways) written in 1835 by an unknown author, and in Ume-no-chiri (Dust of the Apricot) by Nagahashi Matajirō in 1844.

It is easy to see the appeal of this story to Ufologists, who find in the spherical Utsuro-bune an object closely resembling a UFO or, more accurately, a USO (Unidentified Submerged Object) as well as the alien-like description of the woman found inside. Another layer of mystery is added by researchers who find similarity between symbols found on Utsuro-bune, as depicted by artists, and those symbols associated with the Roswell incident and the Rendlesham Forest incident.

Perhaps Utsuro-bune was a bonafide extraterrestrial or, maybe, there is a perfectly reasonable terrestrial explanation to the mystery. Whatever the case may be, it is not the only incident of strange UFO encounters handed down to us through Japanese legends, as we shall now look at another.

The Tengu of Mt. Iwama

One day, in the year 1815, a seven year old boy from Edo, Japan, witnessed an unusual site near a religious shrine. As the boy walked by the gates of the shrine, he saw an old man selling herbal medicines out of a “bowl” shaped kiosk. The man subsequently stepped into his kiosk, levitated into the air and flew off into the sky.

The boy, whose name was Torakichi, was astonished and returned the next day to see what was up. Torakishi again found the old man there, selling his herbal remedies. He waited and watched and, by days end, witnessed the old man again entering his “bowl” to fly off into the sunset.

Torakichi returned several more days to spy on the odd merchant when, eventually, the man spotted the boy, who then offered him an opportunity to fly in the bowl. “I can show you lots of interesting places,” he told him.

Though initially hesitant, the boy eventually took up the offer. He stepped into the bowl with the old man and off it flew, first over the high mountains in Hitachi province then, on subsequent trips, to Mt. Iwamayama, where the old man himself lived. Over the course of the next four years, the boy became a formal pupil of the old man who trained him in the arts of magic, medicine, writing and the martial arts.

During this period, the boy traveled on long journeys across the earth and even into space. When not studying with his master, the boy lived in a Buddhist temple of the Nichiren sect. The old man, who wanted to remain anonymous, told Torakichi, “Just say that my name is Sugiyama Sojo, and that I am one of the thirteen tengu living on Mt. Iwama.” The tengu are shape-shifting demon ghosts found in Japanese legends who can be either evil or protective spirits.

In 1820, Torakichi’s story caught the attention of Hirata Atsutane, a writer and researcher on Shintoism, who tracked the boy down and, through subsequent interviews, published his findings in 1822 in a book called Senkyo Ibun (Strange Tidings from the Realm of Immortals).

In the book, Torakichi is asked “What did this country look like up in the sky?” The boy answers:

“As you fly upwards, you see the seas and rivers and plains and mountains and even roads all stretching out enormously wide on all sides. But as you fly higher they gradually get smaller and smaller until by the time you are as high as the stars this country hardly looks any larger than the moon.

When asked what the moon looks like from space, the boy replied “The places on the moon which are brilliantly shining are like great seas mixed with mud. And the place which people call the hare pounding rice cakes is in fact two or three open holes.”

When asked what the substance of the sun was made of, Torakichi answered:

“The sun is much too hot to get very near, but when you fly high to take a good look at it you see lightning flashing among the flames. You can’t see what the substance of the sun is, but it looks more like fire than a solid thing.”

Some descriptions in the book are consistent with what we know through science today, which is surprising considering the book was published in 1822. On the other hand, there is much in the book which may suggest the boy was a good story teller with a vivid imagination, such as his encounter with a water dragon, or his visit to a land where people dressed in dog skins and communicated through barking.

History is replete with stories of strange flying machines and encounters with alien beings. Who knows for sure where reality ends and fantasy begins. All we know is that more and more sightings are popping up all the time. Perhaps one day we can get to the bottom of this mystery but, until then, all we can do is study the case histories of these unusual events, searching for clues as to what may lurk in our mysterious universe.