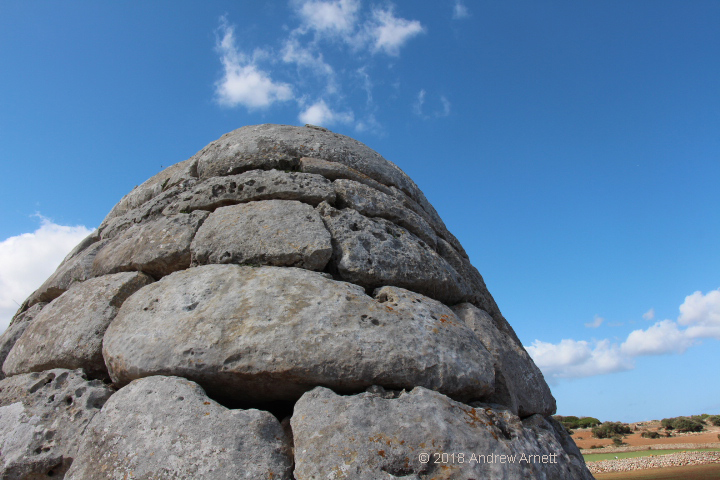 We all know about Stonehenge – the rock star of all prehistoric monuments. Over 800,000 people visit the ancient site every year. Everyone, it seems, wants a piece of the rock. Even President Obama has dropped in for a visit. But not everyone thinks Stonehenge is all it’s cracked up to be. Complaints on Yelp include a “lack of freedom” for visitors and disappointment at not being able to touch the mighty edifice, nor stray too far off a well-regulated footpath.

Indeed, the English Heritage is entrusted with protecting the 5000-year-old site from tourists – a tall order for one of the most popular monuments in all of Europe, let alone England. But if you fancy stone megaliths, lost civilizations and unhindered access to ancient ruins, the island of Menorca, off the coast of Spain, has something very special to offer. I recently visited this small island and was impressed by the archeological wonders awaiting me there.

Menorca is the easternmost island of the Balearic group in the western Mediterranean. The island measures only 50 km across at its widest and has a population of approximately 92,000. Humans have been known to dwell on the island for more than 4000 years, which has been host to a varied and tumultuous history that spans occupations by the Greek Minoans, Jews, the Vandals, Romans, the Crown of Aragon, Islam, Britain, and of course Spain.

What interests us about this unimposing island is the fact that Menorca is host to over 1,500 prehistoric archeological sites dating from the Talayotic period (2500 BC – 123BC). Amongst these ruins, archeologists have identified 15 different building types, including simple and complex hypogeums, megalithic tombs, halls with slab roofs and the ubiquitous “taulas” (“table” in the local Catalan language) referring to the stone megaliths protruding from the earth. These monuments consist of a vertical stone slab and a horizontal slab laying flat on top, creating a T-shape which is eerily reminiscent of the structures found at Stonehenge.

These ruins, like those at Stonehenge, are shrouded in mystery. Who built them and for what purpose? No one knows for sure because those who built them kept no written records. Naturally, theories have emerged. For those with a paranoid bent, Stonehenge was built on ley lines by ancient Druids, using Atlantean technology, as a landing pad for alien ships. Others believe that Merlin used satanic giants to magically transport the stones from Mount Killaraus in Ireland.

But what of the ruins at Menorca? Certain researchers suggest that the taulas were built as religious temples for the worship of a “Bull God.” The theory was proposed after a bronze bull figurine was found during excavation of the Torralba d’en Salort on Menorca. Indeed, the first known people to inhabit Menorca were Minoans from Crete, a culture which held the bull in high regard. In 1967, the Spanish archeologist J. Mascaro Pasarius asserted that the taula itself represented a bull, with the vertical slab symbolizing a bull’s face and the horizontal slab the bull’s horns.

Another theory was proposed by the archeologist Waldemar Fenn who claimed the taulas were used to accurately predict lunar cycles. He cited a prehistoric cave drawing found on Menorca depicting the constellations which convinced him he was dealing with a highly developed culture with a keen interest in astronomy. He observed that when looking at the entrance of the taula, the moon would traverse the entire length of the top of the altar during a 9 year cycle and then would reverse itself. After 18 years, the moon would be in the exact location as where it was 18 years earlier.

As for a paranormal explanation, non has yet been proposed. However, the Balearic Island group as a whole is noted for its paranormal activity. One famous incident occurred on November 11, 1979, over the nearby island of Ibiza . The pilot of Flight JK-297, a Spanish commercial jet carrying 109 passengers, caught sight of a group of glowing red orbs fast approaching his plane. To avoid a potential collision, the pilot changed altitude but was followed by the lights. Spanish Air Force jets were scrambled. The pilot made a decision to go off-course and make an emergency landing at Manises airport in Valencia. This was the first time in history that a flight was forced to land due to UFO activity.

Menorca’s neighbor Ibiza is currently a trending tourist hot spot attracting the likes of Paris Hilton, Rita Ora, Elsa Hosk and Ruby Rose, and they’re not all going just for some fun in the sun. They’re here to visit the healing properties of Es Vedrà, a rock protrusion just off Ibiza’s coast said to have the same energetic magnetic field as the Bermuda Triangle and the North Pole. A popular belief claims that stone from Es Vedrà was used to build the Pyramids in Egypt, as its limestone rock holds the maximum concentration of energy, similar to those found at Stonehenge and Easter Island. Some believe that Es Vedrà is the tip of the sunken continent of Atlantis. Reports by local fishermen of lights and flying objects emerging from the rock have fueled the rumor that beneath Es Vedrà there lies an alien base.

Whether the ruins of Menorca have a UFO connection or not, they are certainly a wonder to behold in their own right. As such, 32 of the locations have been nominated for declaration as World Heritage sites. I had the privilege of visiting two of these sites. They were located just outside of Ciutadella de Menorca, the town I stayed in while visiting the island. The first location, named Es Tudons, functioned as a ceremonial burial site and believed to have been built around 1400 B.C. The site is in excellent condition, and is easily accessible from the main road.

The second site visited is called Torrellafuda, and located about a 15 minute drive from Ciutadella. One can rent a car or hire a taxi, which are readily available at the town square. This site served as a settlement during the Talayotic era and is set in a picturesque holm oak wood. The site is also notable for a hypogeum (artificial cave) and a well preserved, though truncated taula, the central column having been broken in two. 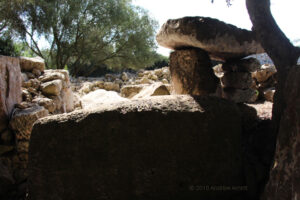 Menorca can be accessed by ferry from neighboring Mallorca or one can fly directly into its airport. The town of Ciutadella, located in the western end of Menorca, is one of two major towns on the island and is a charming place to visit for in its own right. There’s plenty of fine dining, shopping and intoxicating Spanish flare to immerse oneself in.