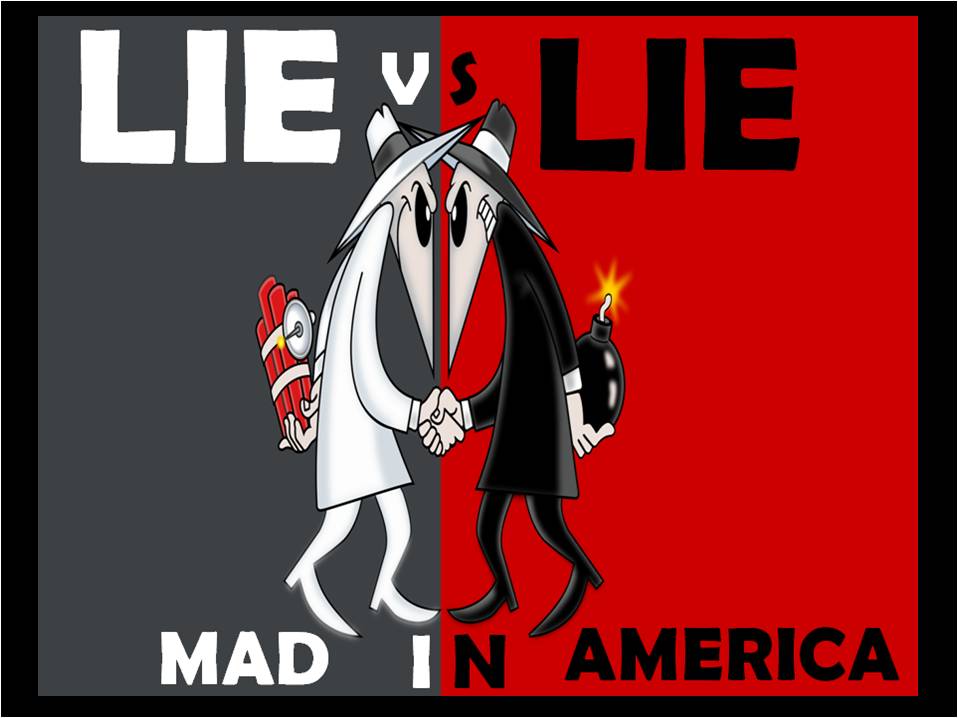 LIE VS. LIE: MAD IN AMERICA

[dropcap]A[/dropcap]s the mainstream pretends to catch up on the criminality of government in this country, it is still playing softball with what is happening in order to maintain a sense of calm when Americans are beginning to realize that despotism and the battlefield is being set up in their own back yards.

We need to now ask the question, how is it that America is a free country and a beacon to the rest of the world, when it is looking more and more like our lives are all part of somenoir spy novel played out in real life where the enemy is the citizenry and the declaration has been made that you must watch your actions or be disappeared, jailed or worse.

We have questioned the validity of elections. We have asked ourselves if the free press is really free when the citizen press is now under the eye of big brother. A massive database of what has been published is now being analyzed and kill lists are on the ready for the massive round up of seditionists and those who can be considered a threat to the government’s goal of empire.

Our own country is now a place where the police are already using it as a staging area for all sorts of threats, coups and whatever else they term as revolt. We are seeing black helicopters over our cities, trains transporting ordinance from town to town, and jets blasting through the skies with the assumption that it is happening for our safety.

We are now learning that it is all for our coercion in the event that people decide they are fed up en masse and decide to march through the streets demanding that we are treated like Americans instead of criminals rebelling against the world government.

How does it feel to know you are not going to get a real and accurate account of what criminality exists in government when whistleblowers and sources are afraid to talk to reporters?

How are you going to be able to decide what valid information is when the arm of the intelligence community puts its fingers in every news story creating a form of newspeak that is misleading to the general public?

Is there anyone that is on the so-called progressive left end of this whitewash that is still willing to defend where this country is going? Is anyone waiting for the apologists to whisper in our ears that all of what this administration is up to is above board even though it is evident that the lies have been continuing from the Bush administration through the Obama administration and that the maligned conspiracy theorists can have their moment in the sun because they were unfortunately correct about the corruption in Washington?

We were told that, with Obama in office, we would see the toning down of the abuse of power. We were told that Obama was above targeting political opponents and disenfranchised Americans. However, now we are seeing the ideological right wing citizenry being targeted with IRS harassment, police visits, silencing, and we are also seeing boycotts against any journalist or talk show host that exposes this hypocrisy.

Even though the program was shut down in 2003, it seems that it did not stop its operations with the help of the NSA. It seemed to justifiable to have a number of flies strategically placed on the wall, and wiretapping, spying and data mining continued.

We were told by the Bush Administration that only overseas calls were being monitoredand, of course, after investigations by independent journalists, the so-called conspiracy theorists had proven it was lie and of course it was swept under the carpet or it was touted as the best way to prevent terrorism.

Lie after lie we were beginning to see a pattern and that is the lie was used to justify the lawlessness of government and now – even while it is being revealed all over the world – Americans probably don’t even realize how bad we are looking to the rest of the world and how soon no one will take our edict of being a free country seriously.

That is exactly what we are in now; we are in the phase of silent war. The apparatus of the merging police state has been legalized and now the alphabet agencies, the military and local police are interchangeable and we are now adapting to the idea that our peace officers look more and more like soldiers on a battlefield and that agents that are highly skilled in electronic surveillance will most certainly seek out enemies of the state by eavesdropping on anyone they profile.

The empire, or beast system which now is revealing itself as being a centralized intelligence hub and the continuity of government will have it transform into a predator state.

We were warned that vast amount of technology and mechanized death would lead to an overreaching statism that would probably horrify the dystopian writers of the past.

What is even more troubling is that the American people are being told that “ordinary Americans” will not have their phone calls monitored, or their internet actions monitored.

I wish that when the term “ordinary Americans” is used they would be more specific, because it sounds as though that there is a hidden statist comment when we all know that the “ordinary Americans” have just about had it with the unwarranted monitoring of their communications.

However it doesn’t stop with the wiretapping and eavesdropping. The surveillance state is now looking at your credit card transactions as well. The National Security Agency has gone on the record as saying that this information is vital in the tracking of terrorists.

Since this has now been reported in the mainstream, we have to determine that more lies will be given to cover up the next phase of this mission creep.

However, we may see people more reticent about helping anyone for fear that they too will be suspected of aiding and abetting a suspected enemy of the state.

This, of course, will be reinforced by the true believers of the police state who will see the pain and suffering, the torture and detainment as “deserved.” It seems that it is great sport for armchair juries to condemn any American hunted by these agencies as deserving because they assume that if they are hunted it is because that they are guilty.

This, of course, is evidence that in the court of public opinion due process is something that is needless and takes too long to determine the guilt when it is obvious to the observer that what the media has presented is enough to condemn anyone that is labeled a terrorist or combatant.

No one raises questions why unarmed suspects are gunned down or other suspected terrorists are also fired on that are unarmed.

We just feel the need to cheer on the police state because we believe that the end justifies the means.

CIA General Counsel Stephen Preston has gone on the record as saying that “American citizens are not immune from being treated like an enemy if they take up arms against the United States.” Furthermore, they are not immune from being treated like a potential enemy if they protest, assemble with groups or even have the slightest connection to a well known terrorist organization. You don’t have to assemble bombs, threaten school children, or even burn a flag to be under suspicion. They don’t even need probable cause. If they think that you are a threat or if they profile you as a terror mastermind, you may not see the light of day.

There are many people who will take the government’s word that the new laws and the civil rights violation only apply to terrorists, however that is naïve and there are a lot of people who have been under the gun and harassed by alphabet agencies and government paid security just because they fit a certain profile that has nothing to do with guilt or any other associations with so called terrorists.

America is under the gun, literally, and people who have never experienced government harassment are so sure of themselves in knowing that it doesn’t happen here. That there are no American targets. It is already assumed that if you are a target you most definitely have some sort of guilt.

This is wrong and this attitude is normal for those who have been traumatized into accepting without question or rebellion a police state.

Thanks to highly-controlled information, many Americans are unaware of the criminal activity that is going on behind the scenes. Many who are aware are helpless to do anything about it. Others are willing accomplices because they still believe the system does not abuse its power.

The bending and mutilating of constitutional laws and human rights have been well documented. The continued power grabs and wanton greed of the warlords, are finally being revealed. No longer are we to guess about the intentions of those in power. We no longer have to speculate about targets.

They have all been published in books and in essays submitted to think tanks that are financed by the same self important fascists that have their cold grip on our nation. We can just stand idly by and watch the entire system of social programs, the welfare of the states, the counties and the cities of the United States disintegrate. The country has been wrapped inside a massive shroud of fear and with this fear there is a demand for more control by the powers that be. This unfortunately is a mistake. A mistake we could have avoided if we just paid attention to history.

In the real world, terror against the United States is always publicized; however, terror against its citizens carried out by power wielding government organizations is seldom reported. In a police state you are collateral damage, and in the court of public opinion you are already labeled a trouble maker the minute you pose for your mugshot and people are bankrolled to make your plight a political football.

You think that it is all easily summed up in a sound bite, but the human fragility is never mentioned. Someone breaks down in the public eye and we assume that they had it coming. In a predator state the majority are siding with the predators. They will be eaten too.

Little by little until there will be no one left.