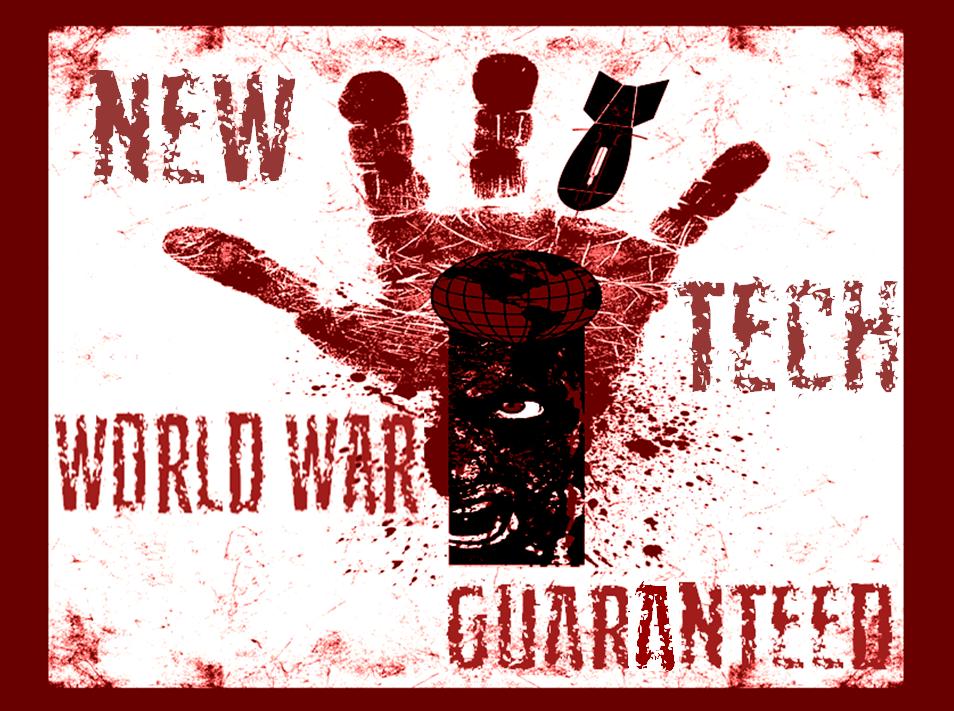 As we are looking over the headlines and hearing about World War III brewing, there are many writers and analysts that are now saying it is already here. The problem is that the mainstream media has not declared it and so we are awaiting those who compile the historical record to actually pinpoint the exact date it all began.

The reason is because there are many of the technocrats that are now speaking about a slowly reported historical record that has ignored the arrival and potential of the new technologies that have signaled the infancy of the world war, and that this tech, while being reported as silent and at the ready has already been used and that we may even have seen a nuclear bomb detonated in Damascus.

Americans are tired of 12 years of endless war and do not support the arming of the Syrian rebels and they most certainly don’t want to see another war, however their own government is ignoring their wishes and are moving forward.

For at least three years since 2010, there have been stories that have been called ‘conspiracy paranoia’ regarding the stockpiling and deployment of new technological terror weapons, and other tech weapons that can and will be used against the infrastructure of many countries including the United States.

Following the 2003 invasion of Iraq, the Bush administration identified Iran and Syria as the next stage of “the road map to war”. US military sources intimated that an aerial attack on Iran could involve a large scale deployment comparable to the US “shock and awe” bombing raids that happened in 2003.

The word was that the weapons had to be more advanced and more lethal. It was also interesting to note that the code name for all of this advanced weaponry against Syria and Iran would be called TIRANNT, an acronym pronounced like the word “tyrant” and meaning “Theater Iran Near Term.”

What made TIRANNT so interesting was how it was calculated using the best intelligence and technology that created the blue print of an “end game” attack in these new regions.

Israel was also integrated into the war plans but only on one condition, and that is it gets a “green light” from Washington.

Looking back at all of the meetings Barack Obama had with Israel and how many of them stirred interest, but were reported as non-events, we are beginning to see how the whole picture was unfolding with secret Faustian bargains and what appeared to be a nuclear attack against Syria.

In May of 2013, Israel dropped massive bombs near Damascus, ones which the New York Times, quoting residents, resulted in explosions “more massive than anything the residents of the city have witnessed during more than two years of war.”

A viral video of a massive wall of fire engulfing the entire city went viral on the Internet.

The Jerusalem Post reported that “a senior Syrian military source” claimed that “Israel used depleted uranium shells” which started the rumor that perhaps a low grade nuclear warhead was used and that the use of these bombs by Israel demonstrated a lack of ethics and morality.

When we hear of depleted uranium weaponry we don’t stop and think that the word ‘depleted’ is public relations spin. It makes it sound like the nuclear material is worn out. It’s not. It’s uranium.

Nuclear waste remains radioactive for billions of years, contaminating ground, water and air which causes cancer, birth defects and death although DU is allegedly “safe” for humans, according to Pentagon scientists. Safe even though it is made to kill people?

Meanwhile, lawmakers were already preparing for a battle to be waged in the American homeland. We have now learned that the NSA, of course, increased it’s wiretapping and eavesdropping on American communications from phone conversations to Internet and Twitter feeds. It is also being revealed that while the mainstream outlets have failed to report the new war in the homeland, the F.B.I is now saying that drones have already been employed to spy on the American people.

FBI Director Robert Mueller acknowledged that bureau uses drone aircraft in the United States for surveillance in certain difficult cases. Mueller told the Senate Judiciary Committee that drones are used by the FBI in a “very, very minimal way and very seldom.”

“He did not say how many drones the FBI has or how often they have been used. A federal law enforcement official said the aircraft have been used for surveillance in hostage situations and also when suspects have taken refuge behind barricades.”

Once again, the government and the agencies of law enforcement have engaged in police state activities that have average Americans at a disadvantage against advanced technologies. Unmanned drone use is becoming more common in the United States although their use is illegal in many cases.

“The Federal Aviation Administration forecasts some 10,000 civilian drones will be in use in the United States within five years, including those for law enforcement and commercial purposes,” the FBI says the technological footprint that they have made is very small, and that we are to be assured that these illegal activities are like little white technological lies that we all have to deal with as we fight this open ended war on terror.

Unfortunately, the biggest struggle for any reporter is to report these facts and then have the American people simply ignore them out of convenience instead of heeding what will be a world war guarantee with massive technical breakthroughs that can not only kill but render an area helpless if all infrastructure grids are hacked and made useless. There have been many horror stories that have been released regarding how high tech computer hackers are now capable of not only reprogramming drones, but also sending out false orders to military intelligence that will most definitely put Americans in danger.

Back in 2007 there was a story that hit the mainstream press about a B-52 bomber that was loaded at Minot Air Force Base with six active nuclear warheads. The bomber flew across the United States and eventually landed safely in Louisiana. The Bomber flew for more than three hours over at least five states before landing. It was reported by the mainstream media that a plane with a nuclear payload was flying a “routine mission” from base to base. The missiles were carefully crated on board and at no time was the public in danger.

Later, after an investigation, it was found that the public statement was absolutely false.

The cruise missiles were not being shipped inside the plane but dangling from the underside of the plane. They were in fact fully armed and ready for fire. All the pilot had to do was notify a radar navigator to drop the warheads along the route. Each warhead carried a 150 kiloton payload. With 6 of them on board, the plane had the kill power of 60 times that of Hiroshima making all claims of a “routine” flight spurious.

If one of the warheads were to have been dropped or if the plane had crashed there would have been a “broken arrow” alert where a loose nuclear warhead could have killed hundreds of thousands of people.

There were several inside sources stating that the orders were given by a computer and that the entire episode was a drill that was somehow ordered or “spoofed” by a clever hacker.

Even more interesting is that Air Combat Command was on stand down on September 14th, 2007 to review emergency procedures. During the review there was dispute over how many bombs were loaded and how many arrived. Some reports claimed that six bombs left Minot AFB, but only five arrived at Barksdale. The munitions squadron commander was relieved of his duties, crews involved with the mistaken load including all ground personnel were de-certified for handling munitions.

It was then reported that a group called Citizens for Legitimate Government said the six members of the US Air Force who were directly involved as loaders or as pilots, were killed within 7 days in mysterious “accidents”.

The warheads were capable of being calibrated to detonate with an explosive power ranging anywhere from 150 kilotons down to just 5 kilotons.

The majority of Americans will just take for granted that all is well. Anyone who questions the motives of government – or points out the anomalies or incongruities within the mainstream media – will be labeled a crank or conspiracy theorist.

This is so because Americans believe that if no one is harmed that they care about then what is the point of thinking about it? There is also some denial involved. Americans tell themselves that our military is superior and they can account for their activities. Now we are seeing that many groups within the alphabet agencies have been compromised and that they are now not only breaking the spirit of the law, but the letter of the law as well.

This illegal activity also can be noted in the “escalation” of war activities in Syria. Former Congressman Ron Paul has sharply criticized the Obama administration for “escalating” the war in Syria by sending weapons to foreign-backed militants in the country and calling the action illegal.

“We heard from President Obama that the war in Syria will be escalated. He now has agreed to send weaponry in to assist the rebels. It’s escalation, that’s a proper word, because we’ve already been involved for quite a few months. We’ve been supporting the rebels for probably the past two years, supposedly for humanitarian reasons.

But now there is going to be a much more aggressive approach and we’re going to send weapons. There is a few problems with this, first off it’s war. Second thing is presidents are not supposed to start war without permission from the people through a congressional declaration of war.” – Ron Paul

The Syrian rebels have requested high tech weapons and supplies and they have been receiving them for many weeks, even before the mainstream news reported that the Obama administration was going to send them.

The frightening part is that the Obama administration has made their deal with the devil and the blow black will be far more terrifying for the American citizen. Ideologically speaking, the rebels that we are arming with high tech capability are part of al-Qaida. So in reality outfitting these rebels with high tech weaponry is quite literally outfitting terrorists who could aim these same weapons at a allies, troops, and in some asymmetrical terror nightmare, Americans on their own soil.

The script is getting old and the story remains the same; however, the terror may be far more technological and soon we will all feel helpless because of the dealings of the mob that are disguised as a trusted and constitutional government.

Benito Mussolini once said about Fascism that “the more it considers and observes the future and the development of humanity, quite apart from political considerations of the moment, believes neither in the possibility nor the utility of perpetual peace.”

At least until reality sets in and then we realize that in a high tech dirty war, friends and family die because of decisions made by leaders that say they “mean well” by ignoring their own citizens.

We no longer are a country that listens to reason, we are a country of sheep whose shepherds have revealed themselves as wolves that are following their delusions and technological hallucinations.

We are told that the patriots that fight for the Constitution are exposing the country to danger by blowing the whistle on criminal wrongdoing in government. We are now pouring our resources into stupid and deadly pursuits.

A series of efforts that remind us that continued world war is not only fomenting but is guaranteed to be a part of our lives for generations.