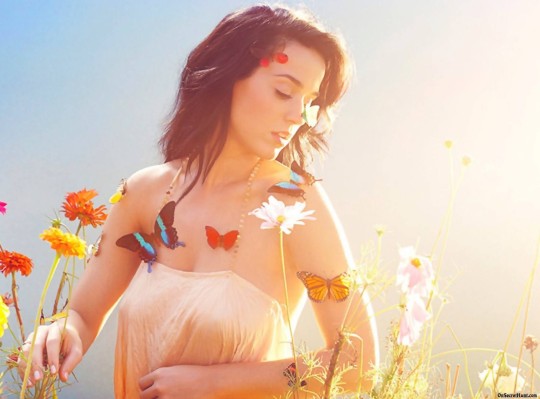 Katy Perry’s “Dark Horse” an Occult Reference from a Different Perspective – The May Queen?

I just so happened to be watching Katy Perry’s “Dark Horse” video the other day and something caught my eye. Doing some quick research I came across the usual references to the Illuminati, pyramids, gluttony and the like but somehow the analysis’s that I read seemed incomplete. There was something else which was sticking out to me and I couldn’t put my finger on it. I racked my brain to find the reference and then it dawned on me – Beltane! In fact a few days before I had been listening to A View from Space with the Spaceman and he had been talking about Beltane and the ancient rituals performed in Edinburgh, Scotland each year. Then it all came into focus.

For those of you who don’t know the ancient Beltane ritual it goes something like this, please remember its much more complicated but I’m summarizing. The May Queen appears with her handmaidens (The White Women) and are confronted by the Greenman surrounded by his guardians “The Blue Men.” The Greenman is dressed in his winter garb. He sneaks away and the May Queen and her handmaidens perform a series of rituals to prepare the world for the emergence from the darkness of Winter. At the end of the rituals the May Queen joins the Greenman but ends up killing him, at which point he sheds his winter garb for spring garb and is reborn.

The purpose of the ritual is to ritualistically kill the Winter to prepare for the emergence of Spring. This releasing the world from darkness and ushering in the light.

OK. so what does this have to do with Katy Perry and Dark Horse? I mean seriously its set in Egypt.

The truth is the video of the song is indeed set in Egypt and uses Egyptian iconography but the song itself was inspired by the film “The Craft” which was essentially about Wicca and Druidism. Not conspiracy needed on that one, watch the movie – it’s pretty obvious and Katy Perry was actually very open about the inspiration or the song.

Along the way, Perry revealed the inspirations behind a number of her new songs — such as “Dark Horse,” which she says “reminded [her] of the moment I heard [‘Teenage Dream’ single] ‘E.T.'” The pop star claimed she was inspired by the 1996 film “The Craft” for the song, which is “about warning a guy that if you’re going to fall in love with me, make sure you’re sure because if not, it’s gonna be your last.”

So in the video what we actually see is a subtext of Druidistic iconography set in Egypt. Given that the video is for entertainment value not necessarily something which is unhea

rd of. Now from a conspiracy point of view, if we begin to move away from the simple Illuminati references such as the Eye of Horus or Pyramids etc. We actually begin to see a different symbolism start to play out which is actually inline with Katy Perry’s source for the song itself. The ritual described as Beltane is not completely acted out, but major symbolic components are there. Which makes me wonder what the ultimate objective was but the symbolism is clear never the less.

Although she has referenced the character of “Katy Pätra” which is loosely based on Cleopatra, I would argue instead that she is representative of the May Queen. This is shown at least partially by the juxtaposition of Perry in both her Cleopatra outfit as well as the white gown we see as she is singing as well as the zoom shot in the beginning of the video.

So what else in the video calls out May Queen? It’s actually all over the video. An example of Druid iconography was the choice to employ handmaidens in white masks. Those handmaidens traditionally are not only people who are assisting the May Queen but also function as her bodyguard, and eventually assist in the slaying of the Greenman. You can also see the Bluemen who are also present though video, though they seem to act more as attendants then body guards to the Greeman. Also present are the Redmen who seek to impede the progress of the May Queen, in this case the Redmen seem to attend the suitors which does make a certain amount of sense given that the suitors all fail and are turned to sand.

What is quite apparent is a lack of the Greenman. I’m not sure what is being said by the lack of the Greenman, maybe he hasn’t arrived yet? But what is clear is that Perry is being shown as the May Queen. All the elements are there for us to see – The White Women, The Blue Men, The Red Men, even the use of fire/lightening to destroy the suitors since none of them are the Greeman I guess? If you want to go that far I guess you could even argue that the use of Egypt might play a role since it is a land mostly locked in Summer, hey its a desert.

Where the symbolism becomes even more apparent is when you look at the associated photography related to the song and the album. These images show Katy Perry on a horse holding a scepter which looks to be made of amber and a crown while the other appears to show her holding a sword. Then there is the actual album cover, which shows a cartoon of Katy Perry surrounded by filigree with a golden horse helmet. Apparently the horse is usually white, but for an album cover gold will do. The symbolism is still there. Other associated photography shows her in a simple white dress among the flowers, in what could be taken as a Spring scene. Also very consistent with the idea of Katy Perry emerging as the May Queen.

The final part of this I find also very interesting was the choice of Memphis. Memphis is indeed a city in Egypt which was a cultural center, and while it could have also been a reference to Juicy J’s home town, Memphis is also home to the May International Festival. A large music festival held in May in Memphis which, amongst other things, seeks to promote different counties music styles. This year, for example, was Panama. What’s important here is that its a music festival (Katy Perry is a Musician) and its held in Memphis (the setting for the video), and of course its held in May (The May Queen, May Day, May 1st).

It has long been believed that the use of symbols like this is a way of preparing the population for the use of the symbols later. This is also called “Predictive Programming,” or this idea of predictive programming the population for coming events. In this case inculturating us with these Pagan and Neo-Pagan symbols. I think that subtext was masked by the Egyptian iconography, and frankly it looks neat and sells well. It also allowed other researchers to stop short of taking the deep dive, something that as researchers we should be doing. Frankly just chucking out the usual it’s Illuminati because forces us to sell ourselves way short. The symbols are there as I said, but I think its a mask for the true meaning.

As with most conspiracy research this could all be off base and it could just be a nice poppy video, but somehow I sense the inclusion of the various elements is intentional. That being said, and as with most things, the actual meaning is really up to the viewer. My intent here is to offer another option other then, well it’s just another Illuminati preparation video. That being said she does scale the pyramid and at the top spreads her wings. Then again she also puts on a diamond encrusted grille and eats spicy Cheetos in front of a pyramid of Twinkies. So I leave it to the viewer to decide.

OTHER IMAGES FOUND ON THE WEB: