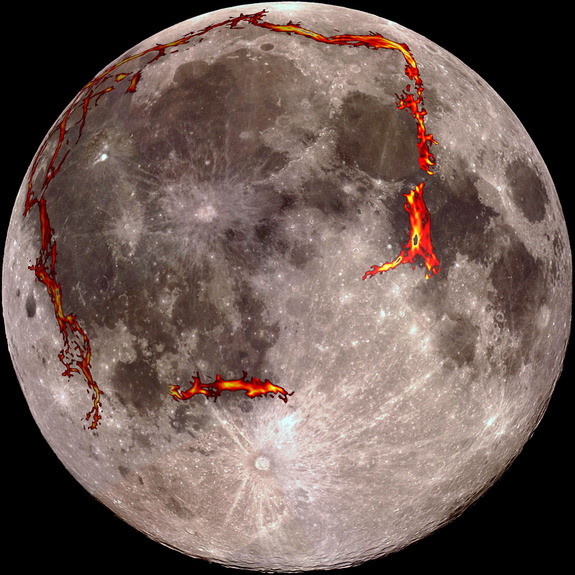 Was a Mysterious Underground Structure Found On the Moon?

In a strange turn of events NASA’s “GRAIL” Spacecraft has detected what scientists are calling a  “Strikingly Geometric”  shape hidden on beneath the Moon’s surface under the Ocean of Storms (Oceanus Procellarum).  This new discovery, found while mapping gravitational properties of the Moon has scientists rethinking their traditional theories. Previously scientists had believed the moon’s Ocean of Storms was a round crater created by a massive meteorite impact but are now forced to explore new options.

“GRAIL has revealed features on the moon that no one anticipated before we had this data in hand,” said study author Jeffrey Andrews-Hanna, a planetary scientist at the Colorado School of Mines reported to Space.com. “One can only wonder what might lie hidden beneath the surfaces of all of the other planets in the solar system.” Andrews-Hanna went on to tell Space.com, “The observed pattern of gravity anomalies on the moon is so strikingly geometric and in such an unexpected shape that it is forcing us to think in new and different ways about the processes operating on the moon and planets in general.”

This discovery is particularly interesting for several reasons.  The first obviously being the shape being “strikingly geometric” must really force us to revisit some older theories such as the theory originally put forward in 1970 by Michael Vasin and Alexander Shcherbakov in an article titled “Is the Moon the Creation of Alien Intelligence?”  They argued the Moon was a fully artificial construct and could be a “space station.”  This was later apparently supported when NASA crashed  Ranger 4 into the moon which resulted in the moon apparently “ringing like a bell” which many have taken to indicate the moon is hollow.

The moon being hollow is certainly a possibility, and now that conventional science can no longer explain why thing work the way they do on the moon we do need to explore all the options.  The interesting thing to me is that the shape is rectangular, and that the rectangular mapping is based on gravitational anomalies.  Those anomalies could possibly be caused by large amount of metal stored beneath the ground like a, wait for it, moon base?  This would be consistent with the plans of Project Horizon which outlined the construction of an underground facility for use.  That underground base is also a critical part of the Alternative Three scenario so what we are really seeing a continuation of evidence for the Secret Space Program.