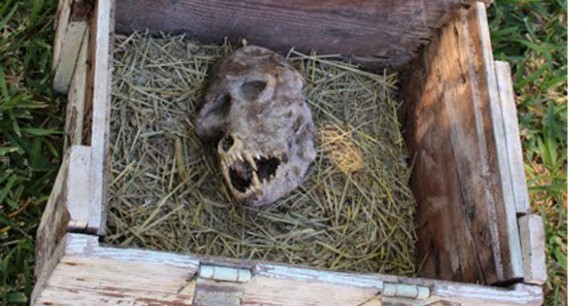 Farmer Finds Chained Box in a Field with Werewolf Skull Inside! 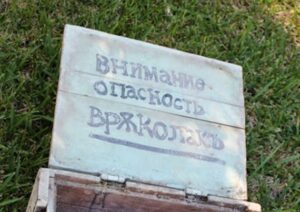 In the small farming village of Novo Selo Stipsko in Macedonia, a farmer named Trayche was digging a new part of his field when he made a shocking discovery. While working in his field Trayche’s plow hit an object buried just below the surface. Curious he investigated and found a box which had been buried some time ago and oddly chained shut. He quickly broke the box open and found a strange skull that appears to to be from a werewolf or ‘Varkolak’ in the local language. Is it a werewolf? The skull has some striking features.

The story of the farmer spread and Filip Ganov, a Bulgarian student who was in the Novo Selo Stipsko doing research on the Balkan Wars. Ganov was very curious about the discovery and contacted Trayche who let Ganov examine the box and take photos.

Garnov sent the photos to a wildlife expert in Bulgaria who believes that the skull was indeed from a wolf but not necessarily a werewolf. Instead, the expert believes the wolf was suffering from something called Paget’s disease which is a genetic disorder (also found in humans) that causes misshapen bones and enlarged skulls.

The skull is an interesting find and displays both canine and human features, features which probably caused some concern amongst the locals who were raised on Eastern European folklore. The chain on the box is a good indication so whoever buried it believed it was a creature they didn’t want roaming around. The main question is what does the Cryllic onthe inside of the box say? Those details were not given but would probably help the story.

Is it a werewolf? I’m not sure but it needs more exploration for sure!