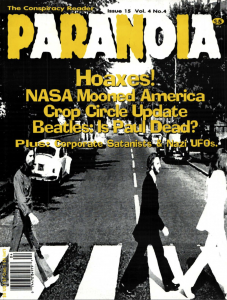 Since 1992, Paranoia: The Conspiracy & Paranormal Reader has presented alternative views and marginalized theories of the inner workings of the cryptocracy. Subjects include conspiracy theories, parapolitics, alternative history, and the paranormal.

Paranoia was founded during the zine explosion of the early 1990s. The first issue had a black-and-white tabloid-style layout, with feature stories starting on the cover and continuing inside. Over the years, Paranoia evolved into a 72-page print magazine published three times a year, with a print run that reached 15,000 copies. It was sold on newsstands throughout the U.S., the U.K, and Canada, as well as to subscribers.

Paranoia received a 2001 Award of Merit in the Writer’s Digest Zine Publishing Awards, and has been rated by Playboy magazine as a “Top 10 Zine.” Pagan Kennedy of The Village Voice called it “Weirdness on a grand scale …” containing “a dizzying web of connections.” Alternative book publisher New Paradigm Books recently stated that Paranoia is “an original and provocative thrice-yearly magazine, with an occasional compelling focus on women writers.”

In 2011 independent publisher and well known MK researcher Ron Patton brought the magazine back after an almost three year hiatus, publishing some of the most edgy and in depth research articles in Paranoia’s history.