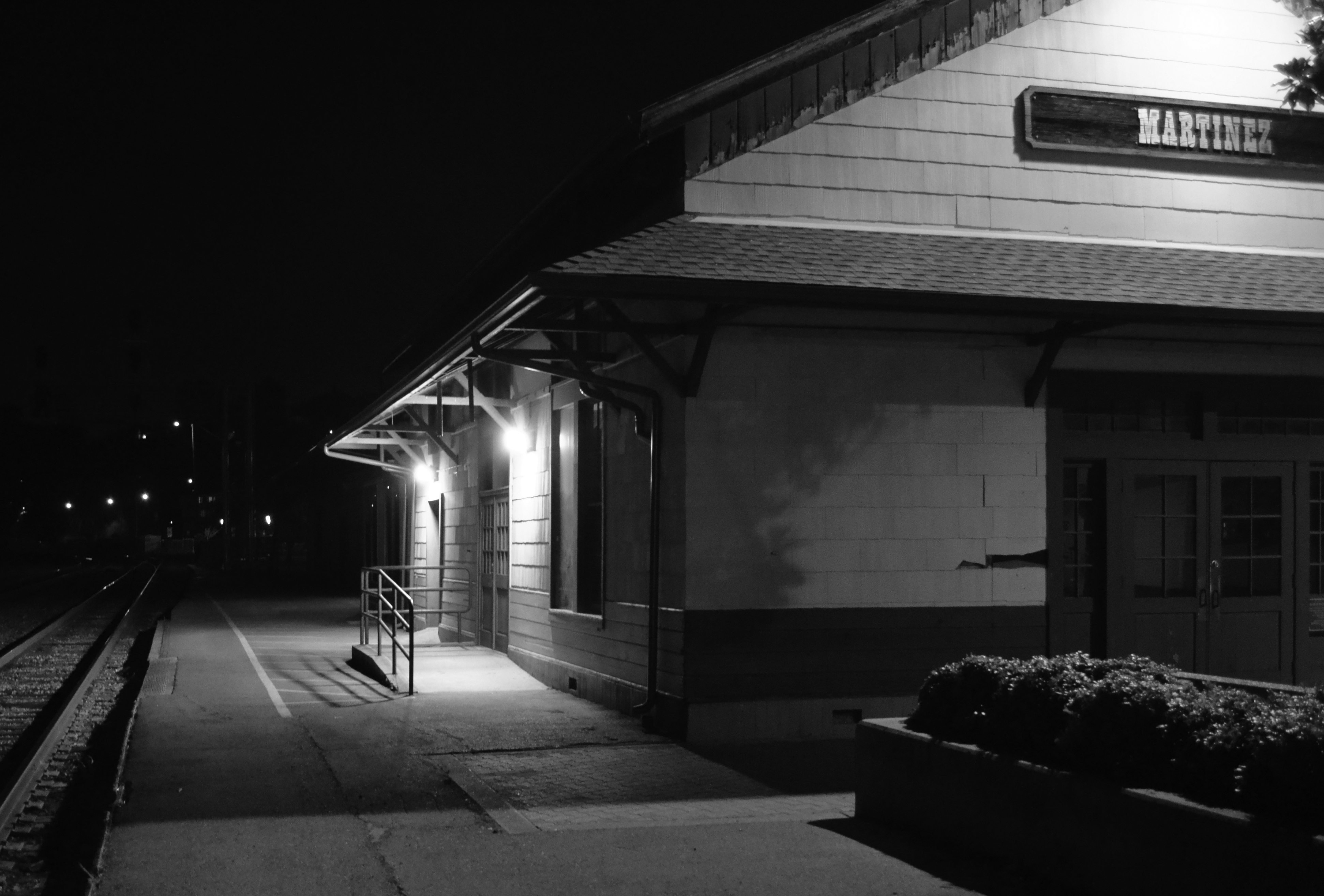 The Haunted Rails… Tales of the Haunted Martinez Train Station

As darkness sets in upon us, we snuggle up tight in the warmth of our homes may be slowly drawing the curtains and wishing each other gentle dreams, but not all cozy nor prepared for a long slumber. For it is in the midnight mists and thick fogs that the spirits come out to inhabit the world of the living, and time when those intrepid investigators journey to these haunted abodes to explore.

One such haunted locale, just off the main street of our fair town, is the aging Martinez Train depot. The still standing reminder of a long lost era of rail travel and birthplace to a thousand dreams over the years, but also the ending point for a thousand more and hidden amongst the aging planks are spirits with stories to tell. There are always stories to tell.

It’s not uncommon for a train station to be haunted. Tales of spectral locomotives, haunted train stations, even the odd airport terminal, abound. Because it is these locations, through their years and decades of service, that have forever touched the lives of their passengers, their staff, and especially the crews, which call them home. So it is not unreasonable to think that maybe the former train station in our fair town is haunted as well.

For many years stories have circulated of strange occurrences at the old train station. Though hard to track down and document, I remember as a child hearing stories of lights turning on and off, disembodied discussions overheard and other mysterious things which defied logical explanation. But that was a different time, a time when tales of the supernatural were disregarded as flights of the unkempt mind. A time which has long since passed, and given rise to the ghost hunters of today, but back to our story.

Originally built in 1877 to service the steam-powered trains of the Southern Pacific Lines, the Martinez Rail Depot has seen its share of history. The weather-worn plaque still located at the aging station reports that the first arrival at the station was a steam locomotive on September 25, 1877, carrying none other than Leland Standford, the great rail American tycoon who is also known for the founding of Standford University. But It should also be remembered amongst the many things this weather-beaten old station has witnessed was that soldiers destined for two world wars, the Korean conflict and the war in Vietnam who used this station as a departure point for there tours of duty and eventually for many their path home to waiting loved ones.
The station served as the home for many during its 124 years of operation, ultimately being replaced by the new resplendent station just down the road.

But so quickly the living forget the landmarks of yesterday, but the spirits don’t and they continue to call the former train station home and make their presences know if you ask. It is the emotional connection to a place, a home, which forever marks this station and calls out to the spirits to come back and stay.

With that in mind, it was those very spirits called back that now dwell in this forgotten train station and the long-held stories of mysterious events which drove the Central Valley Paranormal team to investigate the rumored hauntings. Armed with the latest tools of the age they set forth to document the ghosts of the station and maybe even establish communication with the deceased, using EVP (Electronic Voice Phenomenon) as well as other means.

As they travelled through the darkened station they soon discovered the many cold spots, creaking footsteps and other tantalizing hallmarks of spiritual activity, but it was the backroom near the stove that brought forward the strongest of the spectral inhabitants to come and speak and allowed itself to be captured, on video, with some of the most intriguing results this researcher has seen in a long time.

At the investigation progressed the spirits appeared to be talkative, not that uncommon for a strong energy, and fully engaged them in a form of two-way conversation utilizing a lone flashlight, untouched by human hands, which seemingly turned on and off of its own will in response to their questions. A feat much attempted but very rarely successful but their success was an amazing thing to behold and strong evidence of the tales of ghosts from our youth.

So while the trains may no longer stop at the old Martinez train station, it is still very much in operation and the spirits come and go as they did in life. So if you happen to be in the area and decide stop by on a moonless night at the proper time, when the veil thins and the spirits come out, look through the windows and you may see one of stations former staff or possibly a frequent rider of that bygone era still waiting for their train to come in. But be warned that the conversation you may hear on the platform is not your own and those lights you see inside are probably not the staff closing for the night, at least not the living staff.

Don’t forget your flashlight and a friend! Who knows maybe you too can communicate with the dead, or maybe you can just use it to get around. The station is a very old building with some uneven sidewalks and it can be a very dark place, especially in the hours after midnight.