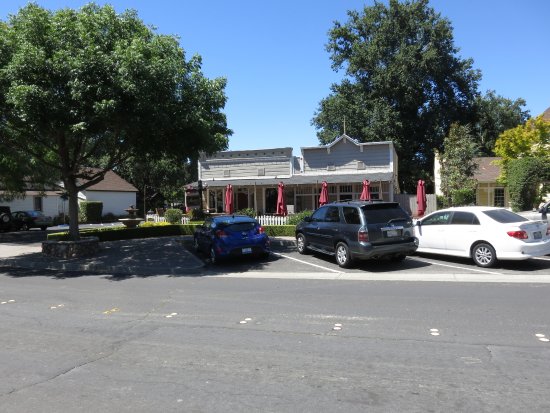 The Haunted Fox & the Fiddle Restaurant of Clayton

Scenes of tragedy almost always breed spectral visitations and the Clayton of 100 years ago had its share of tragedy.  A case in point is the sad tale of the ghost and mysterious spot which haunt the Fox & the Fiddle restaurant of picturesque Clayton.

About 100 years ago an argument broke out between several miners, the cause of the argument is not known but the heated discussion lead to threats.  Those threats lead to guns being drawn, a pervasive solution of the time, and shots rang out.

As the bullets tore through a eucalyptus they struck a small girl who was playing with friends.  Quickly she was brought to “The Growler” which was the local saloon of the era.  Doctors were summoned and on the floor of the Growler they attempted to save the poor girl but were unsuccessful. She later died of her wounds on the floor of The Growler.

The staff of the saloon cleaned up the blood as they moved the little girl to the morgue, but almost immediately the blood stain returned.  Despite repeated attempts to clean the blood stain, it always returned.

Time went on and the stain continued to persist.  Eventually, it was covered and forgotten until the building was renovated about 20 years ago.  The new owners also attempted to clean the stain, and again despite modern chemicals and repeated attempts the stain again persisted.  The new owners simply put a rug over it and moved on but the stain is still there.

Patrons of the various restaurants which have since inhabited the site have also reported hearing he forlorn whimpering and her ghost has been seen around the building.

So if you are in the mood for a haunted dinner, the site now houses Moresi’s Chophouse and is located at 6115 Main St. Clayton, CA so enjoy a nice steak and remember to ask to see the blood stain!