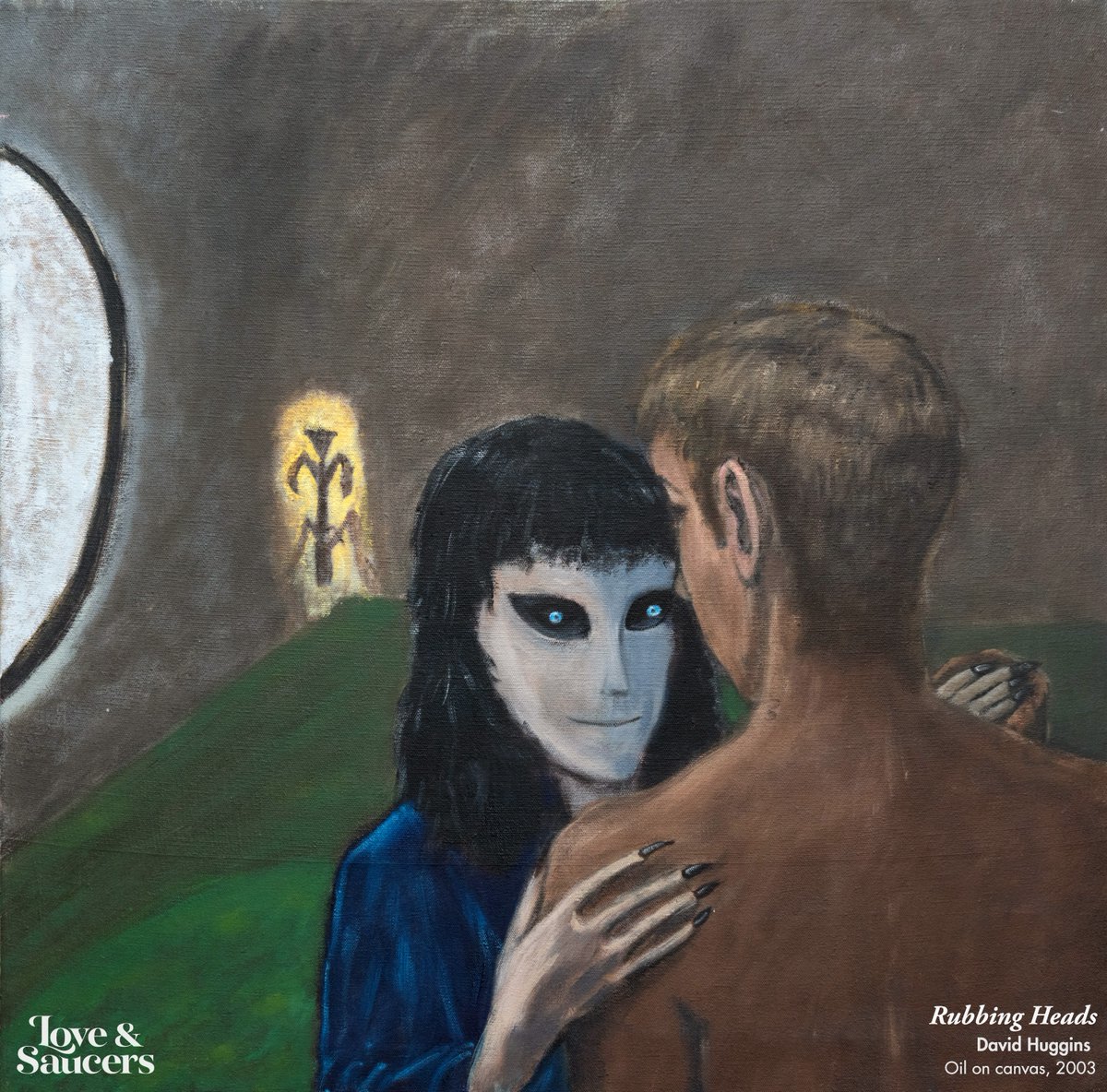 Love And Saucers Or: How I Learned To Stop Worrying And Love The Alien 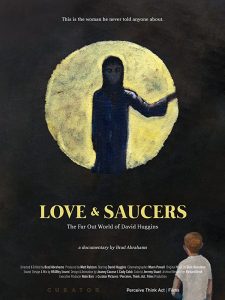 In Brad Abrahams new documentary Love and Saucers, 74-year-old David Huggins tells us, “When I was 17, I lost my virginity to a female extraterrestrial.” The film chronicles Hoboken, New Jersey resident David Huggins’ lifelong encounters with the buxom ET he calls Crescent, with whom he has allegedly fathered hundreds of alien babies. “I thought, if anything, I’d be losing it in the backseat of a Ford — something like that. But it didn’t work out that way,” he says in the film.

All the weirdness began when Huggins was just a small boy growing up in Georgia, hunting for arrowheads in nearby fields for fun. There, he encounters the first of many strange creatures he would become acquainted with throughout his life. “I am sitting under a tree, and I hear this voice say, ‘David, behind you.’ And I turned around and there is this little hairy guy with large glowing eyes coming straight towards me. I thought it was the bogeyman. I didn’t know what to think of it,” he says in the film.

On another occasion, an “insect-like being” resembling a praying mantis appears to David. “I was very terrified,” he says. “It was like, ‘What in the world am I looking at?’ And for an eight-year-old, you don’t know what to think.”

Things came to a head when, in 1961, he was deflowered by Crescent, his extraterrestrial paramour. The bizarre nature of this coupling is not lost upon Huggins, who explains in the film, “My relationship with Crescent was warm and friendly. A little strange. What do I mean, a little. Very strange. She was my girlfriend, really. A very unconventional relationship.”

It is a curious coincidence that Huggins lost his virginity to an alien in 1961, for that was the same year in which Betty and Barney Hill claimed they were abducted by aliens whilst driving through New Hampshire. The incident was the first of its kind to be reported and would launch the alien abduction phenomenon into mainstream culture.

But it wasn’t the Hill Abduction which had the greatest impact on David Huggins. Rather, it was the reading of Budd Hopkins’ Intruders: The Incredible Visitations at Copley Woods in 1987, which triggered a flood of suppressed memories. Huggins says in the film:

“It was like a compulsion. I was being led to the book. There is this chapter ‘Other Women, Other Men’ and I start reading it. And I go, ‘Oh my god, this is the woman I never told anyone about.’ As I was reading it, memory upon memory came flooding back. It was image upon image. They wouldn’t stop. I think what bothered me the most is I didn’t know what to do with it. I was so scared.”

Hopkins’ book is all about alien abductions, centering on the case of Debbie Jordan-Kauble who claimed she was abducted from her parents home in 1983, brought on an egg-shaped UFO, then impregnated by her alien captors. Later, she was shown her alien-human hybrid children. In discussing her abduction, Jordan-Kauble said:

“I have had so many different types of experience with so many different aspects of this field that I am somewhat mixed as to what I think they are and where they come from. I have seen the hard evidence that debunkers claim does not exist. I have also experienced the psychological and physical effects, as well as the spiritual awakening of a close encounter. I am also smart enough to realize how powerful the human mind can be when faced with something that it cannot comprehend. All I have ever been able to do was report what I saw and let everyone else sort it all out.”

Love and Saucers is presented in a fair, even-handed fashion. Huggins has a plain-spoken affable directness, which speaks well to the camera, and Abrahams presents the delicate subject matter in a way that is free of judgment or personal agenda. The director allows Huggins, and those who know him, to do the talking. It is up to us to make of it what we will. In an interview for this article, Abrahams explained to me his approach to making this film:

“It’s the eternal challenge of the documentary filmmaker, to be objective and nonjudgmental, no matter how strange the story or subject, and no matter how much one believes, disbelieves, or wants to believe. I didn’t want to tip the scales in either direction, so I made the decision of letting David tell his story in his own words, and letting his paintings be the visual device of this storytelling.”

Perhaps the most effective aspect of the film is the visual, derived from Huggins’ own paintings of his encounters with the paranormal. Huggins is a formally trained artist, with an impressionist background. In addition to providing a powerful visual element, the artwork helps in developing Huggins’ character.

Huggins claims that, at one point, the extraterrestrials instructed him to begin painting his encounters. After that, he says he was able to sleep for the first time in weeks. Huggins would go on to paint every detail of his encounters, but once, when he painted a fictional scene, he was admonished by the aliens. “Once I made a painting up,” he says in the film, “and they were very upset with me. They said ‘David, do the paintings but don’t make anything up.’”

Abrahams said he first came upon Huggins while listening to a podcast during a cross-country trip some years ago, about a man in Hoboken who claimed to have fathered hundreds of hybrid space babies. Abrahams told me:

“My ears obviously perked up, I had to find out if this man was real, or if he was crazy? Once I finally tracked David down and started chatting with him, I quickly realized the answer to that question. He’s not crazy. In fact, he’s one of the most down-to-earth and humble people you’re likely to meet. This pairing of an unbelievably bizarre story with such a grounded storyteller created a cognitive dissonance I thought would make for a compelling subject. A story worth telling. I also find his paintings arresting. The mix of naïveté and surreality make them cinematic.”

Though Huggins seems to be well-adjusted at this point in his life, and retains fond memories of his extraterrestrial friendships, one has to wonder whether he was a victim, or a hero? For instance, did he have a choice to experience sex with an alien, or was he mind controlled? There are many stories of gray type aliens conducting medical research on humans, etc. Can this be a more benevolent permutation of that scenario? I asked Abrahams what his opinion was:

“Not a victim or a hero. Just an experiencer of something unexplainable. He would say he wasn’t necessarily in control, but he’d also say that overall it was enjoyable and pleasurable. It’s possible these are screen memories of something more traumatic that happened, paranormal or not. But he would likely not support that line of thought.”

Regarding his own take on the paranormal in general, Abrahams told me:

“I like to make a differentiation between believer, skeptic, and cynic. Having not had an experience myself, or seen enough empirical evidence, I cannot call myself a believer. However, I count cynicism as irrational, magical thinking as well, as it too tends to ignore empirical evidence. So I’m a skeptic, which to me really just means to be a critical, yet open-minded thinker.”