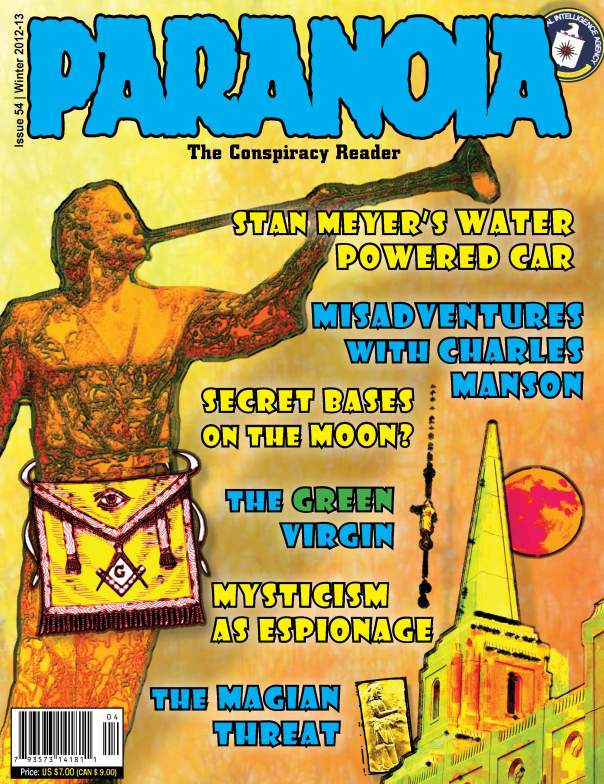 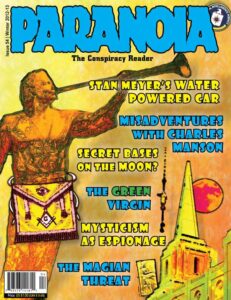 Between the Mormon bid for the White House through one of its Favorite Sons (unsuccessful this time) and researching chemtrails for a book I’m writing—check out my rundown on the Consciousness Beyond Chemtrails conference I went to in LA this past summer—and Patrick Geryl’s 2012 timetable of planetary alignments (http://www.howtosurvive2012.com/), the adventure of getting up every morning has developed quite the spin, not to mention how synchronicity is popping up everywhere as we, like Janus, look over our collective shoulder into the past and at the same time peer myopically forward into the future taking shape before our very eyes.

Nick Redfern’s “Secret Bases on the Moon?” gets us off to a cosmic start by going back over what we’re still not sure happened decades ago (a modus operandi essential to surviving a national security state spitting out lies and secrets like bullets). What was Kubrick’s Odyssey: Secrets Hidden in the films of Stanley Kubrick, “Part One: Kubrick and Apollo” Project Horizon about? Bases on the Moon? (Jay Weidner’s postulates that we may have gone to the Moon but not in Kubrick’s Apollo films for NASA, and not in a rocket.)

Then Paul Krassner’s “My Misadventure with Charlie Manson” dredges up the soiled innocence of the Sixties and what really went down with Cass Elliot of the Mamas and the Papas, Tim Leary, Tommy Smothers, David Crosby, the Mystic Arts in Laguna Beach, Billy Doyle, Sharon Tate, Spahn Ranch . . . and how a Manson morphed into a crazy, reckless, feckless surfer.

Victor Thorn throws a little light on the future in “Stan Meyer’s Water Car,” except for the fact that like Tesla, Stan Meyer too learned that being an inventor who wanted to offer up an invention to better the common man is a dangerous proposition.

Mack White’s “LBJ, the Robot in the Fake Oval Office” does justice to the LBJ I spent many waking hours with when he was still just a Vice President and I was a Girls’ Nation representative at the American University in Washington, D.C. Every morning, he’d remind me that I was from the Show Me State and grin (leer?), “What’re you goin’ to show me today, little miss?” (Creeped me out.)

“The Magian Threat” by Jack Horner takes us way back into the hoary past that he claims has been dragged into the present. Could it be that the one true Magian bloodline still drives bloodline elites to achieve Total Global Dominion? Tuesday Weld was a high priestess of some Celtic lineage . . .

Paul Tice then wonders over our all-too-present future in “Is Your E-Gadget A Trojan Horse?” asking questions we all should be contemplating, like What are these convenient e-gadgets we’ve bonded with doing to our privacy and our brains? How are they dumbing us down? Every day, 4.6 billion people are on their cell phones and iPhones and ebooks and . . .

“Is the Dark Knight Rising From the Mormon Church?” might be another question we should be asking. (Given the power the Mormons wield over the Intelligence Community, I don’t think we’ve seen the last of them.) In this excerpt from her soon-to-be published book Our Life Beyond MKULTRA, Elisa peers into the dark recesses of this most unusual American religion and its involvement in elite and national security machinations of power.

Niki Raapana teases out just what Communitarianism is in her article,“Between Common Law & The Law of Mother Nature.” The reinstatement of the Goddess at Rio+20 Earth Summit is good, right? King Cocaine Bolivian President Evo Morales said so, the UN said so—or could this be the one-world religion that G8 has been contriving for the 99 percent? Not to mention when Occupy Wall Street became Occupy the Earth . . .

“Embedded Code of Ariosophy” by Rosemary Tantra Bensko takes a look under the Oriental rug of esoterica at the symbol language that for millennia has been and still is being used to encode our subconscious, even unto nanobots and Morgellons. As Bensko puts it, “Oracles and their interpreters, with their political backers behind the scenes, have always controlled society. The backers whose messages the oracles are promoting are often totemized as invisible otherworldly beings.”

Finally, as we speed down the wormhole of American-style surveillance and fascism, Dwain Deets directs our gaze back to images, chemical analysis, measurements, witness testimony, and patterns of unhelpful official actions in “The 9/11 False Flag Attacks: High Tech and High Treachery.” Like Christmas Past, we must take yet another look at the 2001 Pearl Harbor that dragged us down into endless war while transmogrifying America into a Dantean landscape.

Once again, we must drag the facts from the Memory Hole in order to remain faithful to truth. Then there are the book and film reviews, Al Hidell’s ParaNotes, not to mention a look at a most unusual bookstore in Toronto dedicated to outside-the-box issues some people call “conspiracy theories.” It’s all here to curl up with on a winter’s night while planets align and the Wheel turns one more time.