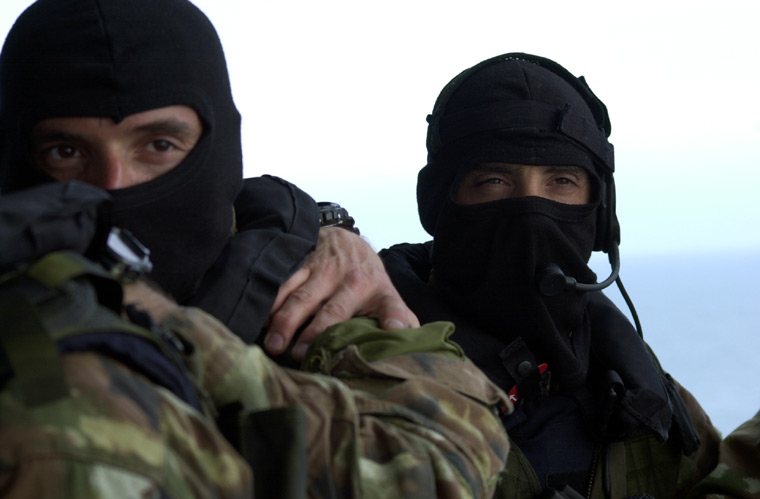 The Secret Team, The Circus, Gladio, Henchmen of The New World Order and the Long War

The word “Paranoia,” essentially a thought process dominated by fear and anxiety, often to a point of irrationality but as it was once expressed to me – Paranoids also have enemies and those enemies can be both mundane and extraordinary.

Often, in conspiracy research, when we postulate on the concept of the control system the phrase “The New World Order” comes to mind.  Stolen from a infamous but seminal speech by George Bush Sr.   But in reality it was actually used in both a H.G. Wells book and more directly to describe a post World War Two world dominated by the two great super powers.

In popular culture it has come to represent a diabolical control system of interlocking pieces which have sought, over time, to establish a control plane that governs the daily lives, and politics as well as thought of every individual on the Earth.  This control system has existed since time immemorial and has been referred to by many names.  The Illuminati, the aristocracy and many others but the purpose is not to be yet another exploration of that control system.  Other writers have thoroughly examined its history, principles, and membership.  Instead I wish to explore its henchmen.  Those dark figures in the foggy night, which execute the plans and agenda’s of their hidden masters.

To do this I have broken the discussion into three pieces.  The Secret Team, comprising organizations which front the control systems plans as well as come up with their own, the circus which represents, as an homage to John Le Carre, the intelligence services, Gladio which are the foot soldiers and lastly a wide ranging discussion of the model by which they operate.

There are a great many organizations which appear to front for the powers that be.  The Masons, the Council on Foreign Relations, the Trilateral commission even Boy Scouts could fundamentally be pushed into this section.  Each secretly carrying out the directives of the puppet masters. But in saying that we need to think about what this really means.

At its most root these organizations serve a fairly straight forward purpose.  Many are secret societies, some are service organizations, and others are policy engines.  But each fits into the puzzle and I believe passively enact the will of the other, that other being the control system itself.

For example we could take the Rand Corporation – the long beloved and much maligned think-tank that has shaped world policy forever. Rand as a corporation was founded as Project RAND in March of 1946 as a project to explore the future of weaponry.  It was financed on contract to the Douglas Aircraft Company who managed the project and oversaw its results. But in May of 1948 it was spun off from Douglas as an autonomous  entity to o help improve policy and decision making through research and analysis”, using its “core values of quality and objectivity”.  The founding for the split was made by the Ford Foundation created in 1936 by Edsel Ford to fund exploration into scientific, educational, and charitable purposes.

In becoming an autonomous entity the RAND Corporation became the first modern think-tank, and through its dedication to objectivity revolutionized foreign policy and arms control with the advent of game theory – a RAND discovery aided by Dr. John Nash who later won a Nobel Prize in Economics for that model.

But RAND by itself is not the control system, it is simply the thinkers and discovers of theories.  In fact if you went into the RAND office you would find hundreds of dedicated people working on problems, finding solutions then leaving to go to Little League games.  And while often demonized for their part in the NOW they are not directly responsible.  In fact they simply create the puzzle and figure out the shape of the pieces but they are not the puzzle nor do they put the puzzle together.  Instead, as I said, they simple find the dimensions of the board and figure out the shapes.

Organizations such as the CFR or the Trilateral Commission are also in this particular word space.  They are asked to write policy documentation and foresee future events though the tabulation of quantitative data. But they too are not the masters. They simply refine the shapes on a global level.

Other organizations such as the Masons or even the Boy Scouts are where we start to see the delivery of the pieces and start to put them together and in the case of the Boy Scouts or other youth organizations they train the young how to interpret the puzzle in the appropriate way.  But like many service organizations and the root level they exist as meeting places where people hang out and are not inherently evil.  Quite the contrary, I think it could be argued they help people in some ways but as a programming tool they are very powerful because secret societies of any kind serve to create a safe environment and perpetuate a secret doctrine and unknowingly place the pieces of the puzzle into the correct places to start to build it or at least prepare the proper people for its construction.

In all these cases these organizations, while serving a higher purpose and working in tandem are, by design, unaware of the larger game plan. This is probably true of all such service orientated organizations.

I’m not exactly way Le Carre chose to call MI6 the Circus but it does seem to fit in some ways.  But the Circus represents those intelligence organizations at work today, be it the CIA, KGB (oops Federal Security Service of the Russian Federation) , the MSS or even the GRLS of Iceland.  These organizations oversee the policies of their respective government and act as the intelligence apparatus. But fundamentally the execute the will of their governments on a global chess board.

Again the players themselves often unaware of the larger game plan and probably uninterested as to the ultimate goal, but each agent individually lining up pieces.

For example maybe a think-tank points out that a certain commodity is rising in price and that will stifle development and commerce.  This alarms a politician who in turn initiates an intelligence service to assist with the overthrow of a government who has been incorrectly performing a given task  That new government, being aligned to the right way of thinking now, lowers the prices on a commodity, that commodity which is now cheaper aids a factory in the construction of a device, but is owned by the right person who pledges a charitable contribution to the right organization which in turn educates the youth in another country into the correct line of thinking.

In this way the intelligence service, while on the surface is trying to protect some given set of interests is actually a tool in the corrective action in another part of the world.  But to the intelligence agent who assists with the overthrow he or she is performing a noble task ordered by their government and making the world a better place when in reality there are assembling a puzzle which ultimately services the control system.  They all do it, and no one is immune to this level of manipulation, because the manipulation is beyond territory  or politics its philosophical in nature.

Always remember the best way to cook a frog is the slowly turn up the heat so the frog does not even realize it is being boiled and simply looses awareness of its fate.

GLADIO and its Derivatives

In this model organizations such as Gladio serve a powerful purpose because in the end run this extra-political organizations who posses the right philosophical view not only serve as active changers of will, in the case of Gladio through the strategy of tension, but also at some future point could be recruited to serve as a type of thought or philosophy police and enforce the will of the control system.

Gladio style organizations, be it Gladio, Absalon, Technishe Dienst, or whatever they are called now are extra-political in nature and beholden to no one.  A good case of this is in the dark days of autocracy in Argentina those death squads and paramilitaries of the time were not government in nature but independent and served as a kind of thought police bumping off the dissenters and clearing the way for correctly minded politicians to take control as well as enforcing the views of the control system which we now find in place.

All these projects and organizations are actively or passively involved in the larger strategy.  They are all tools of a “Long War” which is now pervasive in the world around us.  Each filling a specific purpose, creating the thought, conditioning the thought and protecting the thought as the Long War plays out.  The component organizations unaware of the role to which they play in this larger game but acting on behalf of the control system and this produces an organization that is everywhere and nowhere all at once.

The beauty of this style of asymmetric operation is that the component pieces are fundamentally disposable.  As soon as we become aware of the Bilderbergers, the CFR or Gladio and begin to understand its real object in the control system another organization takes its place putting us back to point zero.  It’s a self healing system of conspiracy because each level only has a rudimentary understanding of the layer above it and it most cases can only identify its handlers which too are only parts of a larger machine and inherently disposable, though I doubt they think that themselves.

But this exposes a critical flaw in modern conspiracy research because as a group we focus on the component pieces, the symptoms, instead of the root agenda.  We read things like Agenda 21 and depopulation and focus on its ramifications but we fail to see the larger picture of why Agenda 21, the Green Movement or other related themes are in play.

What we need to do is start connecting those dots to see the puzzle because all puzzles have a key.

The advent of the Secret Space Program line of research, or the economic control we have all read in Confessions of an Economic hitman, they all have a place in the larger agenda.

There was a TV show awhile back called “Rubicon” and I think it illustrated the point rather succinctly.  The premise is something like this – In the first season we see the death of a manager in a think-tank not unlike RAND. The protégé of the dead man is left hints as to a larger agenda of course sinister by its very nature.  HE spends the season uncovering the agenda like pealing an onion until on the final episode we learn that the outcomes of the think-tank’s research, while being commissioned by the nation intelligence operations was being used by a small cabal of people to amass enormous wealth, but we also learn in the final episode that the cabal had a handler for a larger operation. Then it ended having been cancelled by AMC despite having fairly good ratings.

So why is Rubicon important?  Was it because it was created by a man named Jason Horwitch, whose father was a CIA agent? Or more importantly, actively or passively, got a little too close to the truth in its exploration of the control system.

Over time we’ve seen this played out before with the Rubicon, The Parallax View, Alternative Three, Alias (before it got strange), and many other TV shows and films.  Each time showing us a pyramid of control and each time centering on a global control system, which starts to get uncovered, and each time a pyramidal control system which seeks to push an agenda in the Long War.

Kind of makes you wonder if art represents life or life represents art. Either way we have a problem…