Why is Prism So Bad, Really? 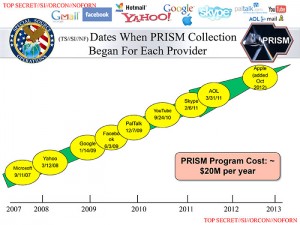 Over the last week or so there has been a lot of discussion about the recent leak by an NSA contract of the PRISM program.  A debate has raged in not only the mainstream media but also the alternative media as to why the PRISM program is a violation of our rights, why FISA courts are illegitimate and more importantly where do we go from here.

My intent here is not to discuss those topics, at this point many a talking head has isolated and over analysed the PRISM leak.  We know what it is, the snooping of META DATA about your phone calls. Of course this is only done when its dooly authorized by FISA, and of course you need to be doing something wrong right?  In reality the PRISM system is just datamining  all the meta data from your phone calls.  It is trapping the time, duration, source and target as well as location each time you pick up the phone to reach out and touch someone.

So we got that out of the way, but why is it dangerous?  That answer is actually quite simple.

For many years now the NSA has been datamining you, yes you.  They have been intercepting emails and web traffic via the Carnivore system, phone calls via Echelon (Haven’t heard that name in awhile) and now phone details from PRISM.  We also know that they have been actively datamining Google (They have a webpage you can check out! Of course they do..), Facebook and just about every other place you can go to do anything on the web.

But what is it used for?

All this data, meta data, builds up a cohesive profile of you the person.  Who you call, about what for how long, where you surf, from where and why and of course what you buy and from whom.  All these things make up a composite of you as an individual. That composite can be feed into a VERY powerful computer to make a virtual you which can be analyzed for trending and risk analysis.

The more important thing about PRISM specifically is that when coupled with Echelon you now have a complete context of a phone call.

For example – I call my mom and say hello mom did you hear about the terrorist plot to blow up the moon?  She respond oh really tell me more!

This phone call was intercepted by Echelon, and keyword analysis tells the analyst that this phone call has some likelihood of having been about a terrorist event.  The analyst becomes concerned, maybe I plan to blow up the moon and thus deliver a truly Thundar the Barbarian scenario (Hey Ucla, what’s new!).  So the analyst retrieves the PRISM data and determines the call was made by phone number 123-123-1234 at 6:04pm on a nice Sunday.  They also know it was made using a cell tower at coordinates xx by yy.  If the call is still in progress they can dispatch a person to pick me up, oh and since my cell has GPS they know I am at xx.xx by yy.yy so I’m easy pickings.  If the call is over then they know about where I am so they can dispatch a nasty black van to search for me.

Now this is where it becomes really dangerous.

Recently Eric Holder released a memo which justified the use of lethal force against a known danger to homeland security. So if FISA decides I’m a threat a drone can justifiably be sent to nail me while my hand is on the phone still.

They key to this PRISM release is about context.  PRISM was the final link is a dastardly chain which allows, at least for a phone call, the full realization of the much vaunted “Total Information Awareness” program the NSA has been seeking for sometime.

No longer is your location private, as we learned we now have the capability to track you directly as well as use the meta data of the phone call to create maps of who you called and for how long. This is Total Information Awareness and the ultimate level.