Mysterious Disappearances, National Parks, and the Break Away Civilization – Evidence of Batch Consignments?

On the surface the idea seems quiet reprehensible, people being forcibly relocated and forced to perform slave labor, but then again you are dealing with a group which does not necessarily hold human life in high regard, but it does make sense. It is cheaper to use slave labor then to use a skilled group of people to perform any task.

So here’s the problem – How do you prove that Batch Consignments exist? A relatively large workforce would be needed, the work would be grueling and the mortality rate would probably be high due to accidents, overwork and other causes. So you would need a constant supply of new people being kidnapped to provide the labor force. So where do you get large numbers of people over a long term? The answer, at least in part, may surprise you.

Ever year thousands of people go missing under mysterious circumstances. Accidents, murder, and many other reasons can provide the context. Recently there have been many stories about people kidnapped who spent decades in captivity before escaping to tell their story, but there are others which actually defy conventional logic.

Most batch consignments, if they exist, can be attributed to political instability in the third world. During many of the regional wars seen in Eastern Europe, Africa, and South East Asia instability and large numbers of displaced individuals provide a large source of labor. During these conflicts entire villages could disappear without a trace with little or no attention and the level of humanitarian catastrophe in the worn torn regions makes it almost impossible to catalog the number of people displaced, lost or just vanished.

During the Rwanda Genocide in 1994 more then 800,000 people were murdered and hundreds of thousands simply vanished and are presumed dead. This would represent men, women and children and some of those individuals could have become batch consignments very easily.

But there is another mystery which was discovered by researcher, and ex police officer, David Paulides. Paulides has undertaken research into disappearance clusters and his research has proved some very interesting results. On one hand he has documented numerous cases where, in National Parks, children have disappeared within feet of their parents only to be found miles away sometimes even over mountain ranges with no recollection of how they got to that location.

In other cases he has documented cases where people simply vanished leaving their cloths in a pile as if they were snatched from within their clothes. Their clothes simply simply piled where the person had been standing. In both cases dogs were unable to pick up the scent, which is strange, it was as if the person just dematerialized.

Whats more interesting is the locations of the clusters of disappearances. If we look at the map which Paulides has made, we can see that at least some of clusters are located near places like Tonopah/Area 51/Nellis, Edwards AFB, Sandia, as well as many other major installations which could be used for movement. In fact many of the disappearances are reasonably close to facilities documented on a map made by “TAL” dating back to 1990 where he documented secret underground bases and a secret underground rail network which links them. The match is pretty uncanny. 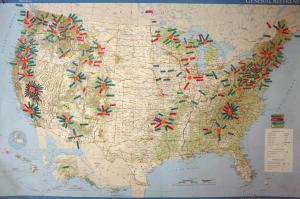 In fact on occasion researchers have even been intimidated by National Parks Service personnel when filling FOIA requests. So why the secrecy? One would think the NPS would be doing whatever they could to locate the missing campers or hikers. One would also imagine that, given the numbers of visitors, the NPS would be working hard to protect people which I think they do to some major extent but you still cannot escape the fact that many of these clusters are in National Parks. But that also makes sense.

If you want to harvest labor you are going to go where people are, and there are a lot of them in National Parks. They also provide a good cover – Well Bob went hiking and got lost case closed. But the patterns Paulides is finding is disturbing. As Paulides put it in an interview with George Knapp:

“People disappear in the wilderness all the time. We’re talking about something different. These are unusual things that don’t make sense, that happen to cluster together in three to four, sometimes as many as 20 to 30 people missing at one location.”

The numbers here, at least the numbers we know, are fairly small. Paulides has found about 400 cases so far of strange disappearances but that is what he has found. The actual number could be far higher, and is high enough that he has written four books on the subject. So I think he’s touching the tip of the iceberg.

He has also documented large number of disappearances of young people in Canada where young men and women have disappeared from native villages, and again there is no official comment.

Could these disappearances be linked? I think its possible especially when comparing his map to that of TAL’s map. It is very odd to me that even given the small geography TAL represented that there are clusters of missing persons around his facilities. That is just strange to me, but it also makes sense. You need to be able to take people somewhere for transport.

Will we ever know for sure that is whats going on? I don’t think we will but one thing is for sure – The next time I go into the wilderness or a National Park which is a hot spot I will be keeping a close eye on my friends and family.

For more information on David Paulides amazing research you can visit: