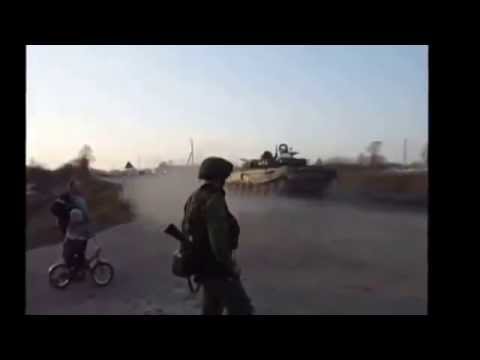 Two startling new videos have emerged on YouTube today filmed by a unknown individual going by the name “War: Ukraine-Russia” appears to show large numbers of Russian tanks within just a few kilometers of the Ukrainian border.  In the first video we clearly see a very long train carrying dozens of T-80 tanks on flatbed rail cars, while the second shows a column of tanks and their crews moving through the countryside and at one point you can hear what appears to be a jet go overhead.  These videos appear to be confirmation of an earlier story we reported about Russian troops massing along the borders of the Ukraine and Moldova.
Russian Tanks T-80. 15 km to the Ukrainian border
[ot-video type=”youtube” url=”https://www.youtube.com/watch?v=Qq_b7gV5icI#t=29″] Russian Tanks near Ukrainian border
[ot-video type=”youtube” url=”https://www.youtube.com/watch?v=JnnHikB4NXY&list=UUAZg55_KAkaKdJxqDd4JksA”]