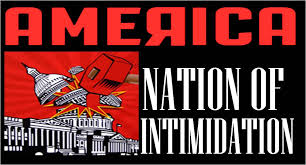 Many Americans are well aware of what it takes to annihilate a foreign enemy. We have had many years of media coverage and various documentaries that show us how a foreign enemy can be disarmed, harassed and intimidated by the use of weapons and propaganda.

We do not flinch at the brutality that is demonstrated against countries that have sworn to bring us to our knees and many will agree that it is in the best interest of America to protect its citizens from potential terrorist activity. However, for years we have not been paying attention to the open conspiracy of intimidation that is being waged against American citizens.

The chief reason this is happening is because of pundits and statists that encourage the enabling of officials to intimidate citizens because we are under the impression that government overreach is needed in order to enforce unfair laws.

The idea of a never ending war being waged by our leaders against the enemy of the week has now become so normal for Americans that the predatory option for all people accused of any civil disobedience seems to be the default position by talk show hosts and other pundits that should know better.

Listen to any particular radio show or pay attention to any political pundit on Fox or MSNBC and notice that they hide behind a political party in order to spread their statism or authoritarianism hoping that most Americans have forgotten the lessons learned in civics or social studies classes.

While many people would pin statist views on the radical left, I have been hearing a lot of statist views being expressed by conservatives that wish to straddle the fence when it comes to defending anyone who chooses to revolt against the intimidation policies of the current administration. Pundits pushing statism are either deliberately or unwittingly taking part of an ideological coup. They are second guessing themselves out of fear that they are condoning or encouraging a revolution against the government in place.

We always hear from the pundits that fascist dictatorship awaits and yet, when the indications of fascism are present, they run away with their tails between their legs and become more statist and authoritarian in favor of the overreach.

Those who we thought knew better than to court these views in the midst of fascism would remain confident in the idea that sovereignty is now a buzzword of conspiracy theorists and that any dialogue about sovereignty has to include outrageous ideas of rebellion, civil disobedience, and revolt.

On one hand they claim that government overreach is out of control and then condemn those individuals that wish to rebel against what they see is an oligarchy that uses intimidation to get what they want.

It is then that we hear that sovereignty is not vested in the people but in the nation state and that all citizens and even businesses exist only to enhance the power, prestige and survival of the state.

Our government now is already testing the waters to see what the reaction of Americans will be in the face of intimidation. They are taking steps to make sure that you will have no choice but to adapt and be a citizen that will not feel the least bit bothered by the influence and enhancement of power on the state and federal level.

Threat after threat, issue after issue and law after law is announced by your government and the hope is that we all comply. Those that do not comply or disagree with such laws, or expose the so called threats as potential rather than real are told that they are cranks, crackpots or conspiracy theorists.

These terms are being used against Americans in order to shame people into falling in line. Many people realize that governments do not give up power easily, and will use whatever means necessary to make sure they retain their stronghold.

After the BLM attempted to intimidate and threaten Cliven Bundy to leave his ranch in Nevada, I felt the need to defend him because of a very important reason.

I defended him because I felt that under the circumstances there was nothing that I could see that warranted the atmosphere of a battleground on his ranch. However, the atmosphere of intimidation and civil war was evident and constitutional abuses were being condoned by senators like Harry Reid who as a representative answers to the people.

Now, we all know that the BLM agents backed down, but Reid said that the fight would not end.

From a public relations perspective do you really think that Harry Reid and his former aide and BLM director Neil Kornze wanted their names attached to a citizen massacre just before an election? Of course not, and I am sure that most Americans won’t even think about how the intimidation and the possible murder of a farmer and his family is still a possibility after the election. Harry Reid stated that “it is not over.”

Does anyone even realize that a president with a kill list and command of drones along with a Senate Majority Leader that wants his vengeance on a farmer and those that defend him is something that we do not condone in America?

The very idea is frightening to the point of nauseating.

For the moment we can also look beyond the political bickering between statists and authoritarians on this issue and understand that this is bigger than some farmer. In fact, movements are being made to insure that the targets are not limited to farmers that refuse to pay their BLM fees.

Keep in mind that when government and its enforcers have big and effective hammers everything begins to look like a nail.

Since the attacks of September 11th, 2001 and the bombing at the Boston Marathon there seem to be some curious movements by government that need to be analyzed because of the message they are sending to the American people.

It is now open that the police in the United States have been militarized. 95 percent of all cities with a population of 50,000 or more now are required to have a paramilitary police unit.

The buildup of paramilitary police has also been seen in cities of less than 50,000 as well. Many of these paramilitary arms of law enforcement have in their possession an 18 ton Mine Resistant Ambush Protected vehicle. MRAPS were designed to protect troops in Iraq and Afghanistan from insurgents’ homemade bombs, now they are being used by paramilitary police units in cities all across America.

This is being done to create an atmosphere of intimidation. We are no longer being protected by peace officers, but by warriors. This indicates that there is a war going on in America. A war where the enemy is not clearly defined but present and will be eliminated by warriors under command of the State and in some cases federal authorities.

You see, an intimidated public is a cooperative public. At least that is what the methodology indicates.

As journalist/author Doug Book writes: “It is this intimidation of the American people by the display and utilization of superior arms that the power hungry among our political ruling class hope will convince even the most passionate of freedom lovers that resistance must be futile–that any refusal to submit to the will of government cannot stand.”

It apparently is working to some degree. It may even work to the point where American citizens have no choice but to surrender their guns because those who wish to take them have superior armaments and soon there will be scarce resources from ammunition to comparable arms to defend the second amendment or any other rights that Americans believe they have.

I warned people long ago that accepting a paramilitary police force with military ordinance should be avoided and that the purchasing of armored personnel carriers and drones would be disastrous for individual freedom.

Now it seems it is all academic.

I mean we have all been made aware of the billions of rounds of ammunition being purchased by Government agencies. New developments have now demonstrated what the Obama administration thinks of sovereignty especially in light of the events that transpired recently in Nevada.

“President Obama has requested $1.1 billion and the Department of Justice asked for $382.1 million for gun control “to protect Americans from gun violence.”

Included in the DOJ’s $382.1 million figure is a request for $2 million for smart gun technology grants.

According to The Washington Beacon, Obama’s $1.1 billion “[includes] $182 million to support the president’s ‘Now is the Time’ gun safety initiative.

“Now is the Time” includes the following:

5. Finish the job of getting armor-piercing bullets off the streets

Furthermore, according to the Washington Times, the Army is now seizing Apache attack helicopters from local National Guard armories, “All of the Guard’s AH-64 Apache helicopters are scheduled to go to the active Army, and there’s nothing its top brass can do about it.”

Examiner.com reports, “In exchange for the heavily armed and highly maneuverable choppers, Guard units will receive 111 UH-60 Blackhawk transport helicopters from the Army.”

Now, the story is that doing this “will save $12 billion through fiscal year 2017“. There are others that see a more sinister reason for the move. Many believe that these choppers were the only defense National Guard troops had against a possible hostile takeover by rogue government elements against a state.

Again, Examiner.com notes: “The Apache, which began service in 1986, is armed with a 30 mm M230E1 Chain Gun (with 1,200 rounds), Hellfire anti-tank missiles, and 70 general-purpose 70 mm rockets. In short, it is capable of fending-off any enemy, foreign or domestic.”

Now all of them will be in possession of the Army.

Is this an indication that there may be some sort of plan of a hostile takeover from some rogue or criminal element in the government?

Or is it another example of intimidation by the power hungry elite?

In a predatory state, it looks like intimidation is being used as an answer to anyone who wishes to open a dialogue about sovereignty.

While pundits of statist and authoritarian agendas wish to silence or marginalize those who are observing the intimidation, well-informed citizens are seeing that the punditry is doing a disservice to American citizens by fostering an atmosphere of cognitive dissonance.

There needs to be more dialogue about such actions and questions need to be asked of our leaders as to why these new developments have transpired.