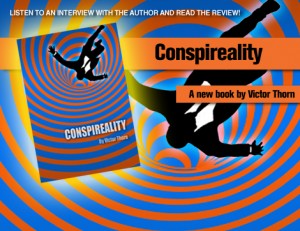 As someone who directly assists victims plagued by mind control and electronic surveillance – as well as being an author and publisher on the subject – Ron Patton is in a distinct position to analyze one of the most unsettling (and hidden) aspects of our existence. During a late-night July 10, 2012 interview, Patton began: “Mind control has been around since the beginning of mankind. We’ve reached the point today where it’s extremely sophisticated in terms of technology and intrusive surveillance systems. It would blow people away if they knew what is being done with behavior modification. Of course, many people doubt what I’m saying but they can verify it by looking up the patents.”

Patton next turned his attention to a book that he feels in on the cutting edge in this field. Released in 2010 and entitled “Project Soul Catcher: Secrets of Cyber and Cybernetic Warfare Revealed,” it contains the following description. “Hacking computers and hacking into individual minds are similar. The 21st century will be known as the age of spiritual machines and soulless men.” The author, Robert Duncan, is a Harvard Graduate who has conducted projects for the Department of Defense, the CIA and the Department of Justice.

After discussing technological realities in the workplace such as automation, robotics and Artificial Intelligence (AI), Patton proceeded to broach an enigmatic topic. “Transhumanism integrates AI with the human body by melding computer systems directly to the mind. There will come a time when people will eat nano-chips, which will enter the bloodstream and flow straight to the brain. Our minds will become computers, with each of the senses having AI built into them. Transhumanism integrates the sophisticated technology of electronics and AI before breaking them down into various components such as nano-technology, brain implants and bio-implants.”

Patton next cited one of the undisputed leaders of futurism. “Ray Kurzweil predicts that within the next 20 to 30 years we’ll reach a point where computers and TVs won’t be needed per so. We’ll be able to create our own realities within our brains. The patents exist and the technology is available, except society hasn’t moved forward enough to where they can accept it.”

He continued, “Technology has advanced so exponentially that what scientists have developed today won’t be released for another 20 years. There’s a lag time where these innovations will be gradually introduced. In “Future Shock,” Alvin Toffler spoke of technology so advanced that it can only be let out incrementally because society wouldn’t be able to handle it. What we know about is only a small portion of that which is behind the scenes. There are satellite computers capable of triangulating and embedding voices directly into the mind.”

A dark side to all these advances surely exists, as Patton notes. “I have a friend who has been ‘uploaded’ – everything he sees and hears and tastes is monitored and controlled. The reason he became a target is that he exposed several individuals such as Satanist Michael Aquino, who conducted psychological warfare for Army Intelligence and the DOD. Another woman wrote about satanic ritual abuse

that occurred in foster homes. She got fired from her job, has to use an alias, and is being targeted like the other individual I mentioned.”

As such, these victims have become known as TIs, or Targeted Individuals. Patton has explored this terrifying territory. “TIs are a recent phenomenon of the past 15 years. It usually happens to whistleblowers or political dissidents who are then targeted electronically or via gang-stalking. Other tactics include directed energy weapons, V2K (voice-to-skull technology where incoming messages bypass the ears and directly enter the brain), or cybernetic ‘steering’ which is done through various aspects of the electromagnetic spectrum.”

In “Project Soul Catcher,” Duncan compares hacking a computer to hacking the brain, which is a bio-computer that can be infected with mind viruses. Patton commented, “Uploading victims speak about perceiving an entirely different reality than us. They can’t really think for themselves because somebody else is inside their brain. I know people who describe seeing three Suns that collide and explode, or hear different voices. It’s all command-oriented, with some of them being told over and over again to commit suicide. It all relates back to Dr. Ewen Cameron’s psychic driving and succumbing to suggestions. Worse, this technology is so secretive and suppressed that if someone visits a psychologist, they’ll be diagnosed as schizophrenic because the doctors don’t know about these techniques.”

Many of the advances in this field occurred at the Stanford Research Institute (SRI). Patton spoke of this facility. “In conjunction with Livermore Labs, SRI was a hot-bed of experimentation in advanced electronics, ESP, parapsychology, mind-sensing and psychic practices. With remote viewing in the early 1970s, they had the means to see targets from a distance via paranormal means.”

Throwing Patton a curve ball, I inquired about the rash of apocalyptic, flesh-eating zombies that have been plastered across the media in recent months. “The powers-that-be,” he began, “via the news and movies put out smokescreens and diversions that get society ready for what they are about to unleash. One theory points out that all the vampire and zombie films are an introduction to bio-agents that will get in our brains, where upon people go crazy and eat each other. Or flesh-eating diseases cause their skin to melt off. With so many stories in the media, it seems like they’re preparing for something big.”

Citing Duncan’s book, I referenced a section where a government mind-bender told his targeted mind control victim,” You can’t think yourself out of this [i.e. his control].” This type of “mind-lock” is reminiscent of someone taking large amounts of LSD and then being unable to escape their “trip” and come down.

Patton observed, “Initially, Ewen Cameron at McGill University in Montreal would directly use psychic driving on patients who were in an induced coma. But now, with remote voices, artificial schizophrenia or any other type of mental illness can be created with direct energy weapons. They have more control over some people’s minds than the persons do themselves. It’s very disconcerting, like gradual torture leading to a slow death. They harass people with different modalities – hearing voices, severe frequencies, or people in pain all the time because their bodies are inflamed. The arrogance of these doctors is a travesty. The patient’s body becomes so distorted that they look like a marionette puppet. They’re unable to control themselves under the electronic onslaught.”

In “Project Soul Catcher,” Duncan also introduces a concept called “spoofing.” In this writer’s book, “Hillary (and Bill): The Murder Volume,” I write about how spoofing was used to jam the radar of Commerce Secretary Ron Brown’s airplane, causing it to crash into a mountainside. Also, hackers use a technique called spoofing when covertly accessing someone else’s computer without wanting to be identified. This concept similarly exists in the mind control field.

“Spoofing takes place,” Patton said, “by disrupting brain wave patterns in such a way that it shuts down our neurological systems, almost like being in a coma. A person’s equilibrium becomes so severely compromised that TIs appear as if they’re drunk, although they haven’t been drinking. The brain is complex and compartmentalized, so if these doctors can figure out what electronic pulses to tap into they can literally make people spin. Or various microwave frequencies can affect the brain. By bombarding the mind with tons of simultaneous activity, they overload these victims with so much conflict and confusion that they can’t come to grips with it. When coupled with infinite looping, sleep deprivation and ongoing voices it causes an inorganic mental condition that drives a person crazy or they develop obsessive-compulsive disorders.”

When asked about his final thoughts on this subject, Patton stressed, “Cognitive dissonance is so deeply embedded, and most people are so deeply programmed that it’s difficult for them to believe that this type of abuse occurs. In the past, occultists cast spells or tried to possess people with demons. But now they use electronics and the occult simultaneously in order to capture souls…i.e. soul catchers. Via technological and occult means, the end game revolves around complete control of a human being – body, mind and soul. Fortunately, they still underestimate the human will. Some TIs are able to overcome their torment. Sadly, a lot of others don’t make it through.”