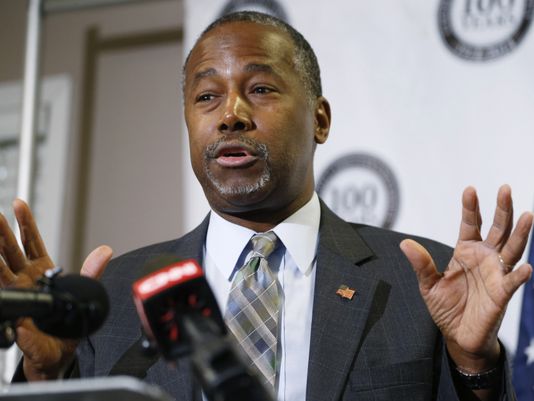 Ben Carson and the New Hegelian Dialectic (Psst.. It’s all rigged and I can show you how!)

Normally I don’t like to talk politics because, well, I think the whole system is rigged and it’s the best way to loose friends. It hasn’t always been that way but in an increasingly polarized political environment its very true today. From my point of view – Left or Right, Up or Down, it doesn’t really matter.  The entire system is engineered to produce an “OK” candidate we can all complain about and it has been that way for many decades.  So what brought me out of hiding?  Well the recent “revelations” about Ben Carson of course.  It made me stop and think for a moment and I decided it was one of those rare moments we can also see a glimpse into how this whole political thing works.

So here’s how it works…. (psst its called the Hegelian dialectic)

Agenda: We need a new president who believes in my (or your) shared values. In this case we shall approach it from the point of view of the republican party (notice I did not say right or left – I’ll get into that in a minute) – Please remember I’m a neutral party here, my selection is based on the example but it really works anywhere.

Thesis – Ben Carson (or whoever) is a christian with strong moral fiber – he represents everything that would be excellent in a President and he’s so laid back.

Antithesis – Oh he lied about the whole West Point – General Westmoreland thing? Gee that’s kind of important. Well lying isn’t very christian or moral. Gee I wonder what else he lied about???? <insert lingering doubt> – Meanwhile he does damage control and minimizes the problem. He could possibly try to enter into shared catharsis but that doesn’t usually work. (You can ask Jim and Tammy Faye Baker about that..)

Synthesis – I guess I’ll vote for Trump (or whoever they choose who is not Ben Carson).

It’s funny how this works. We’ve seen this with everyone from Richard Nixon to Bill Clinton and Brian Williams to well Brian Williams but the system always the same… We build them up to take them down to make you want someone else. They do it when selling cars and hamburgers at McDonalds too.  You might imagine it like this – You go to buy a car and you are approached by a salesman – you find the the car you think you want,  but here’s  the car the salesman wants you to buy (oh by the way its just a little more and it’s totally awesome) and there’s the car I really don’t want because its bad or expensive so you say where’s car number 2 you said its only $100 more??? Deal! Five years in debt for a navigation system.

Catharsis – Now sometimes when a political leader or other sort of personality (ie famous person) messes up, and I mean really messes up, then they try to initiate a shared catharsis where you share their pain and internalize that pain to realize oh that person is not so bad.  A good example of this would be Jimmy Swagart who really messed up but turned around and owned it while crying on camera.  This moment made his flock realize he is a faulty human and they welcomed him bask as a fellow sinner on the road to redemption.  A week later people started writing checks again. Shared catharsis is dangerous and is really the last option to bring yourself back into power but it does work, sometimes.

Now there is another thing about politics which is important to mention.  This is the label of left or right and it has a very subtle but interesting connotation. In western religion (i.e. Christianity) there is a notion of the left hand and right hand of God.  This is very important because the implication is to sit at the right hand of God is the position of Jesus and be proxy the right side to be on where the left side or left hand is often associated with Lucifer or Satan.  The implication being is that to be right is godly to be left is evil. It’s not necessarily true obviously but its a subtle implication and often to be called leftist or left wing in western society is seen as a slam or implication that you are a Communist/Marxist which is also funny because in pure Marxism there is no religion so it doesn’t really matter.