The Sinking of the RMS Lusitania 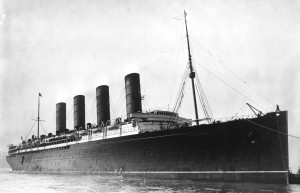 The RMS Titanic may very well be the most famous shipwreck in the world however another magnificent ocean liner was sunk under tragic and mysterious circumstances just three years later.

The RMS Lusitania was a luxury ocean liner, with nine passenger decks, a typical crew of 850, and capacity for up to 2,198 passengers. Her elegant domed saloon where First Class passengers dined, was on two levels and was decorated with elaborate classical murals and finished with gilt trim. The library had rich grey and cream brocade wall coverings, and silk upholstery and curtains. No expense had been spared and the finest mahogany, walnut, marble, and stained glass adorned the ship. First Class guests could relax in the lounge, the smoking room, the café, or the reading and writing room. Passengers could expect a pleasant journey across the Atlantic surrounded by such grandeur. Lusitania had four quadruple blade propellers installed in 1909, and could travel at a maximum speed of 25 knots, very fast for that time.

Unfortunately with World War I underway, Germany considered the waters off the coast of England to be a war zone, and the German embassy in the USA took out an ominous advertisement in a newspaper to warn American citizens against sailing on the Lusitania. There were rumors of mysterious telegrams sent anonymously to passengers advising them not to embark on that particular voyage.

On May 7th, 1915, RMS Lusitania was due to dock at the Prince’s Landing Stage in Liverpool after departing New York on May 1st. Tragically, she never made it. 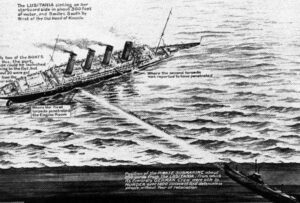 While west of the south coast of Ireland, Lusitania was intercepted by German submarine U-20, which fired one torpedo at its prey. The torpedo hit the starboard bow, under the wheelhouse. Another sudden explosion occurred a short time later in the same area where the torpedo had hit, causing the ship to list even further to starboard. It is possible that exploding boilers or ignited coal dust could have caused the secondary explosion, although some say it was due to a stash of undeclared munitions in the hold.

The next 18 minutes were chaotic with only six lifeboats launching safely, many others overturned and were damaged. The grand ship sank bow first and came to rest on the seabed lying on her starboard side, concealing the damage from the explosions from view. Well over 1,000 passengers and crew sadly perished, mostly due to hypothermia or drowning. Three more survivors eventually succumbed to their injuries.

The HMS Juno set out to render aid to the stricken ship, but strangely they were ordered to return to port. Instead, a civilian rescue effort was launched by the Irish. Survivors were taken to shore and cared for by local residents. Funeral processions were held. Bodies washed up for weeks afterward, and 140 unidentified bodies were buried in a mass grave in Old Church Cemetery in Queenstown. More than 800 victims were never found. 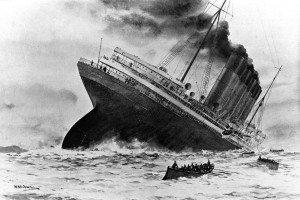 Germany considered Lusitania a military target due to the fact she was carrying non-explosive shell casings, artillery fuses, and machine gun and rifle cartridges. The passengers were considered irrelevant. Interestingly, three German stowaways had been discovered on board during the journey; could they have been tasked with spying on the ship and her cargo? They were discovered and locked in the cells – those men sank with the ship.

Question surrounds what other cargo the Lusitania might have been carrying. Among the listed items was a large quantity of butter and lard destined for an Essex naval weapons testing facility. Suspiciously, the perishable cargo was not refrigerated and the insurance was never claimed. It seems highly probable that some other mystery cargo was in the hold, potentially other items used to manufacture explosives. An explosives manufacturer, Dupont de Nemours, shipped cargo listed as “furs” which seem unlikely supplies for a weapons station.

It has been suggested by some that perhaps Winston Churchill hoped a neutral ship would be endangered by the Germans in order to spur the United States of America into joining the Allied Forces in WWI. 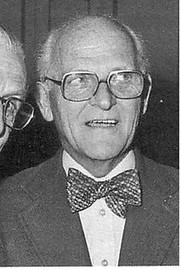 According to historian Patrick Beesly, just one week before the sinking, Churchill wrote to the President of the Board of Trade, Walter Runciman, stating “it is most important to attract neutral shipping to our shores, in the hope especially of embroiling the United States with Germany.”

Prior to the end of 1914, Great Britain had obtained the German naval codes. A group of expert decoders were gathered in a location known as Room 40 to decipher these codes. Beesly claims the experts discovered that a German submarine was in the area at the time of Lusitania’s voyage, however no military escort was assigned, nor was Lusitania diverted to a safer course.

Beesly’s belief is that the Lusitania was purposely left in danger of attack. Perhaps it was hoped that an attack would occur, but be unsuccessful? Some online conspiracy theorists have even posed the extremely unlikely possibility that Churchill himself actually ordered the Lusitania’s sinking.

The United States did indeed join the war, despite President Woodrow Wilson’s efforts to keep the USA neutral, but not until 1917.

With the grand ship laying on the ocean floor, of course entrepreneurs soon turned their thoughts to salvage. In the early 1930’s, an American syndicate came up with an idea of creating a metal tube with an internal set of stairs and a diving chamber at the bottom. The plan was to position this structure above the wreck then sink one end to Lusitania’s deck so divers could then be sent down to retrieve priceless objects. Unfortunately, the contract they negotiated ran out before they could put this plan into effect.

In the late 1940’s, many mines were dropped on the wreck which have left the wreck in poor shape. This has hindered further salvage attempts.

In 1967 American John Light paid £1,000 to purchase the wreck, and in 1968 Gregg Bemis became co-owner. Bemis bought out Light in the early 1980’s. Bemis had to go to court to prove he had the right to salvage items from the wreck, and a prolonged legal battle ensued with Britain, the United States and Ireland.

To this day, Bemis still cannot explore the wreck thoroughly, although he hired a company called Odyssey Marine Exploration to conduct an underwater survey and photograph their findings. The Discovery Channel sent a film crew to document the project.

Several items from the wreck including bronze propellers, an anchor chain and some other objects were retrieved, but the British government claimed ownership of them.   Strangely, of the three bronze propellers, Bemis claims one is currently displayed in a museum, one is on the grounds of a Dallas, TX hotel, and Bemis claims the third was melted for scrap! If this is indeed the case, it is simply unbelievable that a piece of history would be destroyed, unless it contained a clue or a secret that somebody wanted not to be discovered.

Legal battles continue to this day, and until they are resolved further clues regarding the sinking of the Lusitania, and her mysterious cargo, remain hidden, approximately 300 feet under the sea.