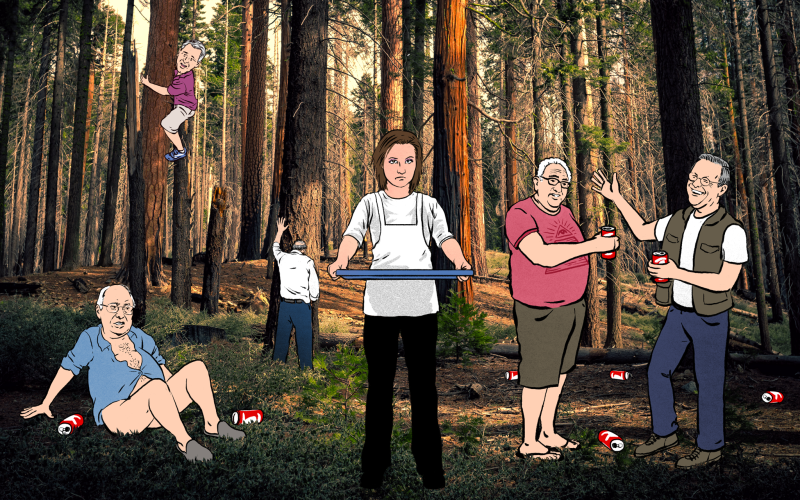 My Summer Job at the Bohemian Grove, Serving Milkshakes to the Shitfaced Global Elite

(PARANOIA NOTE – In reading this article I was actually told something very similar by a chef coming out of the Grove on a shift change.  I had asked him what they served the ULTRA elite and he told me it was the worst kind of institutional crap but he said the pay was good for him as a chef and it was easy…)

“Anyone can aspire to be President of the United States, but few have any hope of becoming President of the Bohemian Club,” Richard Nixon reportedly once said. But for a kid growing up in Sonoma County, California near the Bohemian Grove, the club’s ultra-exclusive campground, getting a service job there was easy.

The elite need a lot of help to unwind in the wilderness. So every year, hundreds of young people shuffle through the Grove’s assembly-line hiring process to spend several weeks bussing their picnic tables and parking their Porsches.

The Bohemian Club, founded in 1872, was originally composed of journalists and musicians (“bohemians”). Over the years, though, the artists’ patrons assumed a larger percentage of the membership. For most of the last century, the Club has been known for its ties to politicians and powerful executives. Members and their guests included Dick Cheney, Walter Cronkite, Donald Rumsfeld, Clint Eastwood and nearly every former GOP president dating back to Eisenhower. In Sonoma County, the Grove, a 2,700-acre expanse of forest owned by the Club, is known for its willingness to hire local kids to work at the three-week-long Encampment each summer, when members come to sleep under the picturesque redwoods, participate in performing arts, and get wasted with their friends.

Most of us were 19, 20, or 21. We had graduated from high school, and were either still living in Sonoma County with our parents, attending the local community college, or on break from school. The majority of those interviewed in this article took entry level positions as servers, bussers or valets. Sonoma has a high cost of living, the third highest rate of youth homelessness for a rural county in the U.S., and lower wages than most other counties in the prosperous Bay Area. These gigs were a welcome source of employment and one of the few jobs in the area that are easy to get without job experience.

“If you don’t get hired at the Grove, you probably have a felony on your record or showed up at the interview looking terrible,” said Olivia, who worked one year as a server and for several years as a valet. “For valet parking there was no training whatsoever, like, none,” she remembered. “They just throw you to the wolves. You’re parking like, $300,000 Bentleys, and they’re just like, ‘Go, fast as you can, fast, fast, fast!”

A boy’s club since the beginning, the Club barred women from even working for the organization until a lawsuit in 1978 went to the California Supreme Court, where the organization’s employment practices were judged discriminatory. By the time I made my way to the Grove in 2009, the summer after my freshman year in college, this was ancient history, but my employment options were still limited to valet parking and the Dining Circle, a charming clearing surrounded by old growth redwood trees and filled with enough picnic tables for several hundred members. A literal red line on the ground defined the area past which females were not allowed. More lucrative jobs, such as maintenance and employee driving, were beyond that line.

“The Grove is the middle of nowhere in the middle of nowhere,” said Devon, who worked there as a server for two summers. The camp was situated outside the tiny, isolated town of Monte Rio (known for its campy vintage sign reading “Monte Rio: Vacation Wonderland”), miles from even a gas station.

Because of the limitations on women’s movement in the camp, employees who worked in the Dining Circle were shuttled through the camp to our workplaces. After making it down a twisty driveway, past the security gates into a huge dusty parking lot, we’d line up to be carted in packed vans, 15 at a time, up an internal dirt road. If you got there late, a line would form and you could look forward to an unpaid forty minutes or so of waiting time.

The sprawling grounds contain dozens of individual camps, which range from incredibly rustic, with canvas tents on wooden platforms that barely have electricity, to straight up stand-alone structures with personal chefs and full bars. (Camp Mandalay had a funicular.) Members wander between these camps, getting progressively drunker as they go, peeing on trees as they please, even in the designated no-pee zone where the employee shuttles would bring us down to our cars. “Once, as I was driven the quarter mile distance between the dining hall and the parking lot I witnessed a dozen drunk men stumbling around,” said Stephen, who worked as a dishwasher in the kitchen. “They were peeing on trees which were only feet from the road. Others would not yield to our employee truck. We had to drive behind them at a snail’s pace.”