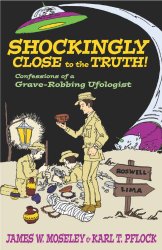 Shockingly Close to the Truth: Confessions of a Grave-Robbing Ufologist – Jim Moseley with Karl T. Pflock

It is no surprise that Prometheus Books has published Jim Moseley’s book, Shockingly Close to the Truth: Confessions of a Grave-Robbing Ufologist (with Karl T. Pflock). Although a bit of a believer himself, Moseley has for decades taken a “cute people” approach to UFOs and everything that has been said and done about the conspiracies to cover them up. His Saucer Smear newsletter more or less views the whole phenomenon as a private parade of people he has met, good-hearted in their way but ultimately possessed of some shade of dementia.

This is a step up from the usual attack and destroy approach taken by Prometheus when it comes to topics concerning the paranormal and the parapolitical, so great praise is due to Moseley. Of course, he would be the first to admit that he only took the best book deal offered him.

A certain amount of self-deprecation goes along with Moseley’s work, which was well deserving of heartfelt kudos long before this book. UFOlogy has long been populated by “cute people” – cranks, pranksters, hoaxers, and the naive, as well as writers and researchers that have stumbled onto some genuinely bizarre stuff and others enjoying the ambience of 1950s saucer culture. Shockingly Close to the Truth documents their stories well in word and in photos. Moseley’s mug, which looks a little like R. Crumb’s, appears like Waldo on the cereal box in the photos of a generous photo section. Other picture strange cases photographed by Moseley, like Georgia farmer Richard Horton’s flying saucer debris from July 1952. Moseley declares it identical to the Roswell debris. He leaves unasked the question that, if this is so, why did the Air Force concoct two different explanations to debunk Roswell?

In this and many other instances, a reader might be disappointed if he or she goes to the book for a comprehensive look at the history of UFOlogy or with expectations that new research or even a shocking new angle might be present. The book is not about UFOs, but about the “cute people” who have a more pronounced interest in UFOs than average people. When Moseley argues that the “saucer occupants are a reflection of ourselves”, he seems to mean that the UFO subculture is a reflection of the larger world. The people to him are as interesting as the phenomenon. At the book’s outset, he declares that it will not include reference to such anchors of UFO history as Kenneth Arnold and Thomas Mantell (although the latter, the first UFO casualty, began Moseley’s interest), nor the 1952 UFO assault on the nation’s capitol.

This stands in contrast to the latest issues of Saucer Smear, where Mosely and his partner, Karl Pflock, who contributes introductory remarks, now say that the true answer to the UFO puzzle is in the historic record of that period. The saucers came in the early to mid 40s and left in the 60s and 70s, according to Pflock. So big chunks of UFO history remain left out, not only what Moseley acknowledges but events like the Maury Island case and Wilhelm Reich’s UFO period do not register at all. In the one book that might be expected to add something to this arcane history, a reader is reminded instead of words from William S. Burroughs’ last diary: “What a bloody fool I was – unsung hero of a war with aliens nobody knew about except the soldiers and certainly would not want to hear about or believe now. And which ‘we’ apparently lost.”

Pflock notes that he became listed in two classified air force intelligence staff studies in 1958 and 1959, but the “isn’t that cute” approach downplays this significant revelation about the extent of military monitoring of civilian UFO watchers. By the time he had learned of the surveillance, Pflock notes that he was too busy discovering girls to care any more. To make any more of it would turn the reader into a Serious Ufologist, one of several categories Moseley invents to try to assert some control over this crazy world. Another such term is “The Field”, Moseley’s term for the entire subsculture, with its with its two “Great Obsessions”, Roswell and the MJ12 papers.

Moseley insists that the MJ12 papers are fraudulent because of the inclusion of Don Menzel. Menzel was a Carl Sagan-like astronomer debunker of UFOs in his time, and MJ12 papers suggest that he was the one who eliminated the possibility that the Roswell craft came from Mars (Moseley himself originally thought UFOs came from Mars). Because Menzel had a thing about “mythical” Mars – a painting of Martians of Menzel (one has tits!) is included in the book’s photograph section – he could not possibly have been a part of MJ12. Huh?

Moseley does not mention the difficult archival work that Stan Friedman did to uncover Menzel’s did indeed secret life and Menzel’s attempts to back-channel information to JFK. Moseley says that Menzel’s “super secret, behind the scenes deeds” had nothing “even remotely to do with flying saucers.” How does he know that? It is clear that Menzel did code-breaking, which is a form of back engineering, the very thing another MJ-12er, Vannevar Bush, seems to be doing in his 1947 essay “As We May Think,” and the process that’s at the heart of arguments that much of modern technology is back-engineered from aliens. Moseley also fails to mention the Cutler/Twining memo and the Lew Douglas memo as corroborative support for the existence of MJ12 – why should he? There’s nothing cute about it. As Steamshovel Press has often pointed out, this is fascinating material that requires educated attention, not glib dismissal.

Moseley’s view was soured by the Bill Moore affair. Once a great promoter of Roswell, and instrumental to the production of the 1987 UFO Cover Up TV Special which had the extraterrestrials addicted to strawberry ice cream, Moore publicly confessed at a Las Vegas MUFON gathering in 1989 that he had been spreading disinformation for US intelligence. Instead of seeing this another clear example of US military interest in the UFO subculture, Moseley relates only that Moore got more jeers than expected cheers and has since remained only on UFOdom’s periphery. Moore’s story remains only half told (Don Ecker has been reviewing it, and the whole Vegas UFO sage of the late 80s, lately in UFO Magazine as well.) It brings to mind another quote from that last Burroughs diary, on the CIA contingent of the UFO war: “They order you to do things they are afraid to do themselves, and laugh at you for doing it.”

Moseley is not quite that bad. Shockingly Close To The Truth is written with great wit and many insights, and an affection that can only come from someone who has lived UFO history in the US for the past several decades. It is highly recommended. In a month that has the Skeptical Inquirer doing a retread on Gray Barker, however, readers should remain cautious that the Prometheus publishing crowd, although betrayed by its fascination with the topic, will simply never “get it” when it comes to UFOs. Moseley does.