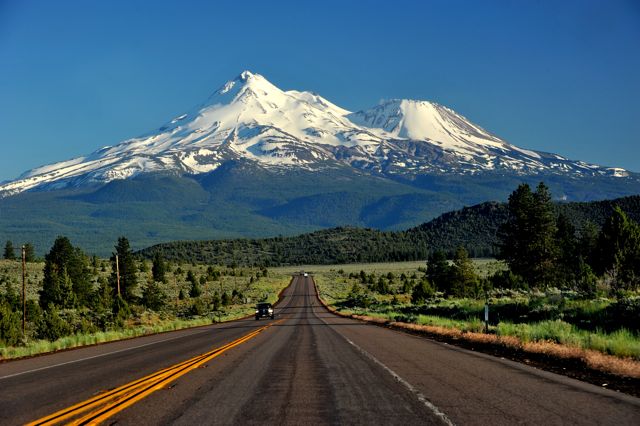 By The Modern People Staff
Originally Printed in UFO Reports

Thirteen occult cults worship at its base, and, such is its “pull,” thousands of the curious from all over the world come to commune with the always snow-topped peak every month.

No other mountain in the world casts such an effect on the world populace. The mystic mountain, which can be seen 100 miles in all directions, casts its spell over cults and individuals alike, but its strongest effects is on the I Am Movement, the largest religious organization in town.

Its members are vegetarians who neither drink nor smoke. The women wear dresses of pastel colors. Black, which means death, and red, which means anger, are taboo. The I Am Sanctuary is a half-block white structure, and its interior is in pink­ the color of love.

To members of the cult, the mountain was chosen by Saint Germain, who died in 1061 a.d., to deliver his messages to the founder of I Am, Guy W. Ballard.

The late Mr. Ballard claimed that while on the mountain, “a white flame formed a circle and, while enveloped in it, he and Saint Germain zoomed off on a trip around the world”. They dropped down from the stratosphere to visit, among other things, the buried cities of the Amazon and the fabled Inca cities of antiquity

Wealth and energy are the symbols of the cult. The faithful are promised power by which they can acquire wealth, gold, jewels-the works.

For 23 years, the St. Germain Foundation has been putting on the “I Am Come” pageant on its stage at the foot of Mt. Shasta in the fall.

Fortunately for Shasta City, all its cults are well-behaved and integrate well into the town-life. All are happy­faced peace-loving people. The only trouble comes from the hippies, who come up in the summer to climb part way up the mountain to howl at the moon and dance in the sunlight while naked.

Many believe the eternally white­topped mountain is a labyrinth of secret cities of bell ringers and such super­duper humans called Lemurians, survivors of the lost continent of Mu.

Nola Van Valer, who operates the Radiance School of Living in Shasta City, has other ideas of what goes on inside the mountain.

She told MODERN PEOPLE that once, while resting near the top with friends, a huge black rock formation opened, revealing a door leading into a temple-like cavern. Drawn inside, they heard a voice inviting them to sit at a large white table, streaks of gold running through it. Phylos and Tibetan, in flowing white robes, appeared before the group.

Shasta City also has followers of the Yanktayvlans, bell ringers said to live inside the mountain. At times they say the sound of bells can be heard from the mountain.

Among the natives, flying saucers have far more believers than do the Lemurians or the bell ringers. Their chief exponent is Thedra, the 73-year­old high priestess, who operates out of a mansion in a pine forest.

Thedra is convinced that space ships from other planets are true rulers of the arcane mountain. She backs up her belief by showing you an album of photographs of spaceships.

Back in the fall of 1963, a Shasta police officer claimed to have seen a flying saucer, which he said was disc­shaped, about 50 feet long, with a row of lights along its side. They changed from green to red to silver. After hovering for awhile over the mountain, it sped away with the speed of light.

On another moonlight night, a UFO paused above the officer’s patrol car so closely he believed he could have touched it. This one was saucer-shaped and appeared to have pipes running under its side.

The officer immediately radioed the police station and told the dispatcher, David Frank, to go quickly outside and look north. David later reported he ::.dw a great blue light hovering brilliantly. Then it sped away and disappeared beyond one of the ridges of Shasta.

The Lemurians are said to be about 7 feet tall with long necks and braided .hair arranged across the shoulders. They have an extra organ in the center of their foreheads, which enables them to communicate with themselves by telepathy.

Old-timers tell tales of hunters trying to run down these bearded creatures but are always stopped by some super­human force. Back in the 1930s, natives claimed their cars were suddenly stopped while coming down •the mountain. Earlier, there were printed accounts of their coming into town to swap pieces of gold for food.

Most of the cultists blend into the mainstream but not the Zen Buddhists, who shave their heads.
Among the other cults at Shasta are Knights of White Rose, League of Voluntary Effort, Blue Fammers, Understanding Inc., Brotherhood of White Temple and the Radiant Schoof of Seekers and Servers.
The primitive wilderness also is a Mecca for sportsmen. Lakes, rivers and waterfalls are alive with trout, steelhead, salmon and bass.

Wild game is equally plentiful on the slopes of Mt. Shasta, where the deer grow extra large. Ducks, geese, bears, pheasants, quail and doves are also hunted in season.

Still, it is the macabre appeal of the unknown that lures the faithful and the curious in from all over the globe. For what could be more thrilling than meeting a real live, breathing Lemurian up there on the highlands?