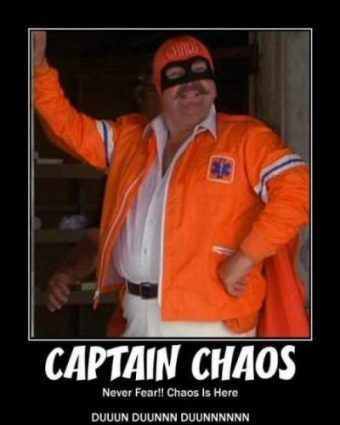 Do  you believe then that the sciences would have arisen and grown if the  sorcerers, alchemists, astrologers and witches had not been their  forerunners?” -Nietzsche

The basis for Chaos Magick was laid in the late 1970s with the publication of Peter J. Carroll’sLiber Null, Ray Sherwin’s The Book of Results and Ramsay Duke’s ThunderSqueak. Chaos Magicians (sometimes referred to as “Chaoists” or “Chaotes”) operate from the assumption that our belief systems can be used pragmatically to alter probabilities, and to ultimately shape reality, to our will. Fortunately, this assumption is being born out thanks to the clever experimental designs and subsequently published research findings of groups like thePrinceton Engineering Anomalies Research (PEAR) group, the Stanford Research Institute(SRI), and the Institute of Noetic Sciences (IONS). Additionally, quantum physicist John Hagelin, a Harvard Ph.D and a pioneering researcher at both the European Center for Particle Physics (CERN) and the Stanford Linear Accelerator, has further empirically demonstrated the existence of:

I think that the importance placed upon the role of the conscious observer in Quantum Physics (and other “spooky” Quantum Information Theory concepts such as entanglement and discord) have placed us on the precipice of yet another disruptive Scientific Revolution, one that seems poised to advocate for the claims of Chaos Magick.

To say science sprung from Magick isn’t all that controversial among historians of science, of course. In this way, science might be considered to be some sort of ‘daemon‘ conjured forth from the works of legendary Alchemists like Isaac Newton, Elias Ashmole, John Dee, and Giordano Bruno. These last magicians were replaced by scientists largely due to the “open source” nature of the science method. This open approach allowed for sharing and collaboration whereas alchemy was closed and occulted. David Wootton summarizes it succinctly in The Invention of Science this way:

“What  killed alchemy was the insistence that experiments must be openly  reported in publications which presented a clear account of what had  happened, and they must then be replicated, preferably before  independent witnesses. The alchemists had pursued a secret learning,  convinced that only a few were fit to have knowledge of divine secrets  and that the social order would collapse if gold ceased to be in short  supply… Esoteric knowledge was replaced by a new form of knowledge,  which depended both on publication and on public or semi-public  performance. A closed society was replaced by an open one.”

However, science is a human endeavor and is subject to human foibles, like all other human endeavors. As such, our proclivity to calcify science into a rigid, dogmatic belief-system instead of defending it as a belief-system smashing epistemological method often leads to us to the gates of “Scientism” (or pseudo-science). Scientism is the rhetorical attempt to extend the prestige of scientific methods to inherently unscientific subjects (this is usually rhetorically carried out via the use of ink-horn terms and prestige jargon). But now thanks to clever Quantum Physics experiments with Bell’s inequality it seems that “Magick” may very well be a real thing now that our common-sense notions of local realism don’t seem to hold up to scrutiny.

“Magick  has many aspects, but primarily it acts as a dramatized system of  “psychology” (or neuro-linguistic meta-programming) to train us to break  out of the cage of the socially conditioned ego and, by plunging  directly into the Chaos and Void from which we emerged, experience a  rebirth into a new sense of self, of world, and of chaos and void,  knowing directly, by experience, that all these names hide the same  hidden unity—the wonderful magician who makes the grass green, makes the  sad man sad, makes the angry woman angry, and makes the loving heart  overflow with further love endlessly.” –Robert Anton Wilson

Religions usually favor the following of a spiritual Guru archetype like Buddha, Moses, Christ, or Muhammad in lieu of, say, apprenticing in magick and developing your own system. Perhaps this is why religions tend to foster conformity while Magick  has historically been punished as a form of insurrection or heresy. In a  nutshell Religions worship their favorite Magician whereas Magicians  don’t worship God(s) as much as they cavort with them instead.

The Abrahamic religions have killed on behalf of monotheism in the same way modern secular psychiatry has involuntarily committed those that seem to demonstrate fragmented identities. In the modern West the fight for one God has become the secular crusade for one single ego identity.

Fortunately, Chaoists employ many psychological models and one of them is the model of Multiconsciousness. The Multiconscious is the sum of the assorted identities that integrate to make up your entire ego. This simply assumes that we are multi-faceted people; i.e., who you are when you’re with your kids is different than who you are with your boss, etc. What call your “identity” is really our greatest trance, and our most common mask.

Influential psychologist Carl Jung offers another psychological model often found useful to Chaoists (as a bonus, Jung loved Alchemical metaphors). Jung’s concept of the collective unconscious is useful for the Chaoist.  Think of it like a Cosmic Internet. Chaos Magicians use trance to log  onto this Cosmic Internet (or tune into the orders that come from Julian  Jayne’s “bicameral mind“, the Akashic blockchain, Superconscious, or whatever.)

“Austin  Spare has influenced me greatly, more than Crowley. For me, Spare’s  great triumph was in uncovering the basic sleight of mind trick which  brings the sub or unconscious into play to effect magic. Once this is  understood you have the key to the whole field of magic and the role of  any particular symbolism becomes rather secondary. Obviously, most  successful magicians must have understood the trick intuitively but  Spare made it explicit with no bullshit and has thus allowed us to  extend the technique in a planned and deliberate fashion rather by mere  intuition or hit and miss procedures.” – Peter J. Carroll

Sleight of Mind in Chaos Magick is the act of sneaking Magickal operations passed one’s own subconscious resistance, skepticism and/or censorship to trick oneself into getting results.Sleight of Mind occurs when the Chaote adopts a useful belief-system (aka B.S.) and enters Gnosis so as to sneak their signals  into the Superconscious. It involves quickly forgetting so that doubts  may not destroy the intent of the original signal (it is also important  that you forget so that you don’t lust after results. As the old saying  goes, “the hungry are seldom  fed”). Corporate logos and slogans do this to us all the time.  Attention is the money of the Information Age where all can be won by  focus (Gnosis) and lost by distraction (Golden Apples).

Belief as a Tool

“In  Chaos Magic, beliefs are not seen as ends in themselves, but as tools  for creating desired effects. To fully realize this is to face a  terrible freedom in which nothing is true and everything is permitted,  which is to say that everything is possible, there are no certainties,  and the consequences can be ghastly.” (Liber Kaos, p. 75, 1992)

Think of it like psychic Method Acting, you  take on a certain role to create a certain effect. This principle also  acts as a guard against dogmatic, closed thinking. Beliefs are powerful and the Placebo Effect is proof.

The term “Gnosis” is used in Chaos Magick in a different manner than in Gnosticism. In Chaos Magick, gnosis is also  known as ‘one-pointed focus’, aka ‘trance’ or ’The Zone’. It can be  inhibitory (meditation, yoga) or excitatory (dancing, drumming, sex,  exercise, etc.) Contemplating goals and desires in this Alpha/Theta wave  state is akin to the experience of receiving suggestions while  listening to a hypnosis CD. Note, this lucid state is where military  trained Remote Viewers operate as well. Some Shamans enter altered  states through the use of entheogens. Chaos Magicians call this “chemognosis” and plants with high concentrations of DMT such as the acacia and ayahuasca are particularly popular (e.g., Israeli psychologistBenny Shanon attributes DMT for granting prophet Moses the hallucination that yielded the 10 Commandments).

The Operations of Chaos

Chaos  is not disorder. Chaos is the void. It is the universe untouched.  Mathematical Chaos Theory posits that there is a sensitive dependence  upon initial conditions. Sometimes all it takes is just the slightest  nudge to move a boulder.  This is known as the Butterfly Effect.

“On  a larger scale the chaos magician is able to work vast changes  unattainable through ordinary, orderly means. Where chaotic systems  exist, it is now well known that in the right place, a small flutter can  transform the entire system. This is known in chaos science as the  butterfly effect. In these fast changing times, at this crossroads of  history, in this time of crisis and opportunity, our entire society is a  chaotic system. By observing society keenly, and choosing the  appropriate moment for the golden apple to be launched, the chaos  magician can work great changes in society through the social butterfly  effect.” http://hyperdiscordia.crywalt.com/neopagan_discordia.html

I like to think of Magick as the science of affecting change (alchemy), chance (sorcery), and receiving intel/forecasting (divination). There are many techniques used by Chaos Magicians to complete the following five operations; some include the use of sigils, talismans, Sex Magick, amulets, etc. (these are not uncommon but are by no means necessary).  Sigiling is a common method that Chaotes use to take charge of such things. The basic operations of the Chaoist are five:

So, at the risk of sounding like just another metaphysical schmuck, Chaos Magick is the practice of bridging the Quantum weirdness between our minds and exogenous matter/information. Chaos Magick is the intersection of the triqueta formed by the union of Quantum Physics, academic Psi research, and Traditional Magick. Not all coincidence is the result of chance because you have your very own coincidence control center.

“Synchronicity  phenomena are characterized by a significant coincidence which appears  between a (subjective) mental state and an event occurring in the  (objective) external world” – from Synchronicity, Quantum Information  and the Psyche by Francois Martin, Ph.D. (Laboratory of Theoretical  Physics at the University of Paris) and Federico Carminati, Ph.D.  (Physicist at CERN).

With the advent of science, Magick has become bifurcated; experimentation is now predominantly managed by the Scientist while belief systems are managed by spiritual/psychological Gurus. You  see, our experience of life largely consists of a battle of beliefs,  between beliefs that help and beliefs that harm. Unfortunately, we  sometimes mistake our placebos for nocebos and the beliefs that we believe are helping us can actually cause harm (primum non nocebo). Magicians, in particular Chaos Magicians, seek to re-unify the study of experimentation and the study of belief-systems.

“Coincidences control the universe so why not then control coincidences?”, says the Sorcerer-Scientist.