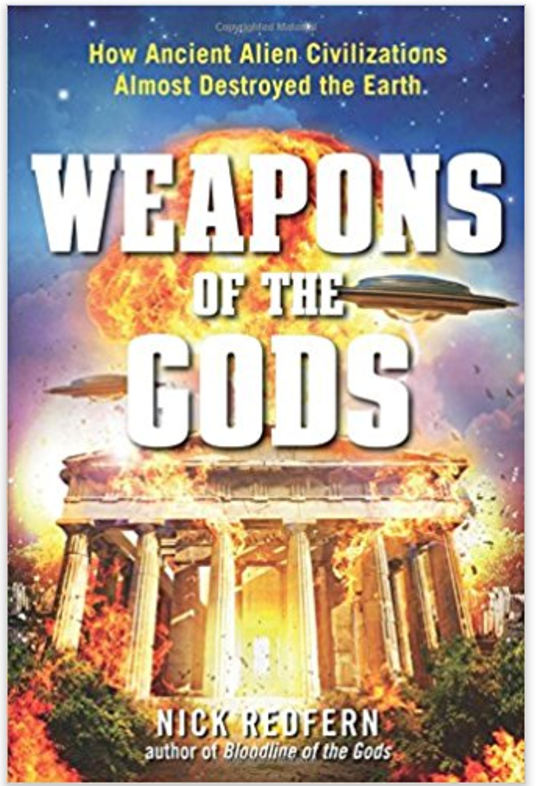 Review: Weapons of the Gods by Nick Redfern

The earliest Ancient Astronaut literature started exploring the world’s most ancient and venerable scriptures, as well as global mythology, for references to flying craft, advanced technology and astronomical knowledge that was way ahead of its time.

It was soon discovered that there was actually an abundance of information scattered throughout the planet that supported the probability of advanced civilizations, terrestrial or otherworldly, having existed in our past, and perhaps still operating in the present and guiding our future.

Numerous books have since been written on this topic… and the debate continues.

I learned to be cautious of the claims quite early on, especially those made in regards to the Greco-Roman world. The flying shields purportedly encountered by Alexander’s forces at Tyre and wild speculations about some of Archimedes’ inventions ignited my caution, and it has been operant ever since.

When I heard that Nick Redfern was sharing his exploration of Nuclear Wars in antiquity, I was eager to hear what he had to say.

I have found Nick’s works to be engaging, entertaining, well researched, well presented and quite thought provoking. What more can be asked of any researcher, investigator, and author?

Weapons of the Gods is a wonderful introduction, update, and re-examination of the topic. It paints a thorough picture of all has been presented before, then returns to the source material upon which the assumptions rest and reveals how the claims emerged.

At times the speculations rest on a firm foundation of facts, which cannot be dismissed out of hand. On other occasions there appear to be very creative and selective interpretations being presented as gospel truths.

Questions that should have – but weren’t, asked before are clearly articulated by Redfern, indicating the need for more research on some of the claims.

Because of its approach, which was fair and open, Weapons of the Gods delivered much more than it promised.