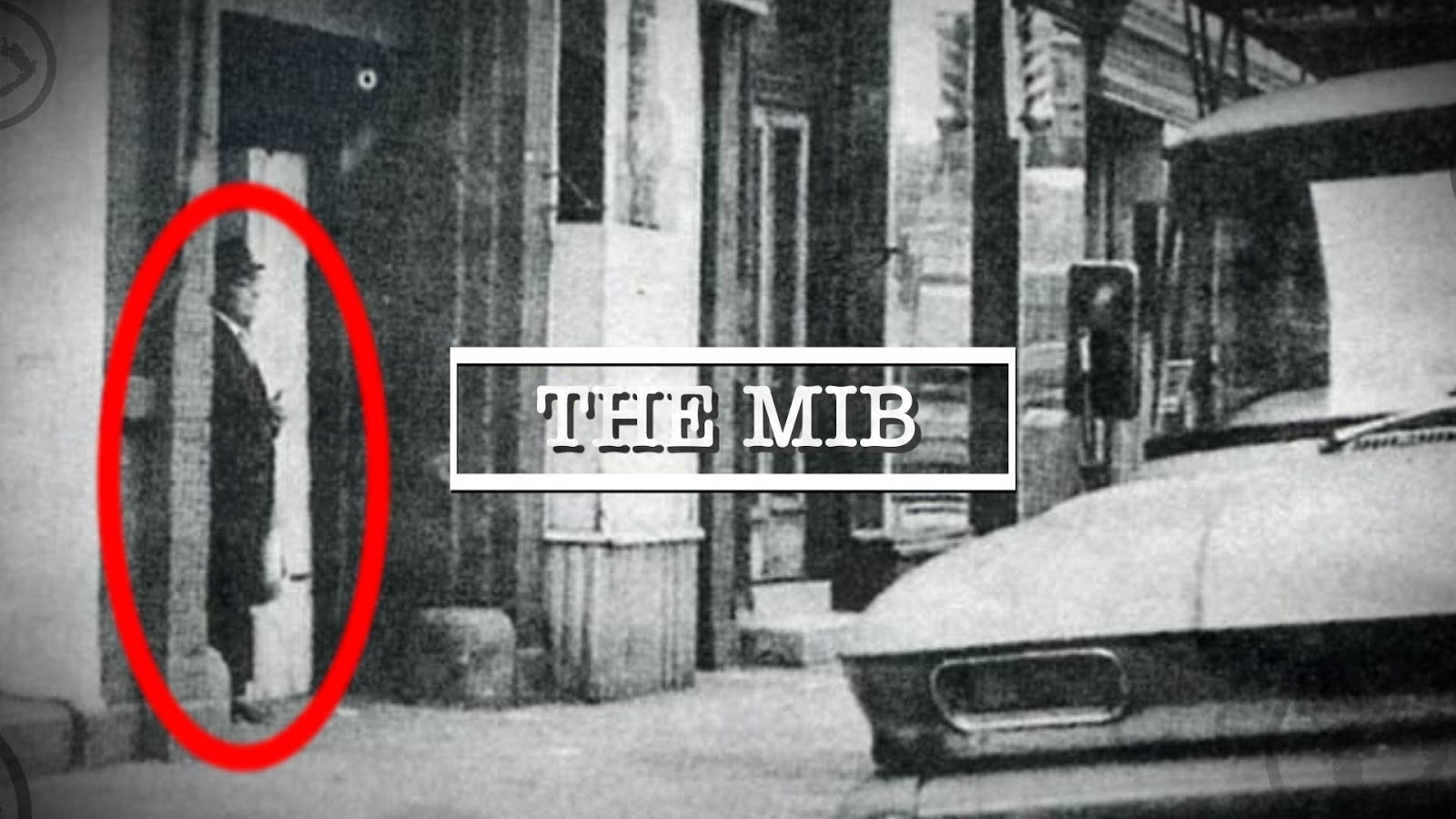 Men in Black: The UFO Terrorists

I have never dared to tell this story before.

First off, nobody would believe me, and second of all, how does one go about coming to terms with a terror so unbelievably real that it literally make the hair on your arm bristle, and your flesh crawl?

The “Men in Black” – or “MIB” for short – have had this ominously evil effect on dozens of other level-headed individuals. But let me explain in more detail for those not aware of the regin of terror that has gone on in the UFO field, almost totally undetected for so many years.

There are it would seem, at leased two different distinct types of MIB that we must contend with.

“Secret agents” posing as either Air Force or other authorized officials have, from time to time, popped up in the annuals of ufology, prompting, in the late 1960s, the Defense Deparment’s Vice Chief of Staff, to issuse a warning to all Branches of the service to be on the look out for individuals impersonating Air Force officers.

“In one reported case,” the memorandum signed by Rewitt T. Wheless, Lt, General, USAF, notes, “an individual who represented himself as a member of NORAD, demanded and received photos belonging to a private citizen. In another, a person in an Air uniform approached local police and other citizens who had sighted a UFO, assembled then in a school room and told them that they did not see what they thought they saw and that they should not talk to anyone about the sighting.”

In other instances, the MIB do not impersonate government officials, but arrive seemingly out of thin air dressed in sinister black garb, only to frighten the literal daylights out of those who have experienced a UFO sighting, undergone a close encounter with aliens, or somehow stumbled upon “hard evidence” that offers additional proof that a particular case is legitimate.

Often the MIB are said to be able to read the minds or control the thoughts of those they set about to harass. They can also tap telephones lines, invade a person’s dreams, interrupt the flow of mail, cause hallucinations, and, in general, reek utter havoc on the lives of those they seek to intimidate. They have tried to run over witnesses, or have driven them off the road, shot at those they are trying to “silence,” and even physically attacked certain individuals (if we are to believe the more outlandish MIB stories that have spread throughout the field).

Even the noted astronomer and foremost researcher, the late Dr. J. Allen Hynek, did not discount these bizarre stories that were reaching him as head of the Center for UFO Studies. Hynek once noted in an interview: “I have on occasion been told what seemed to be a straightforward story, when suddenly the witness lapsed into a highly confidential mood and told me that he was sure that his phone was being tapped or that he was being watched, sometimes on a regular basis either by the government or by occupants of the craft.”

Frequently, the Men in Black arrive upon the scene in a sinister looking vehicle – most often time a black Cadillac with elongated fins – which very often is an older model that for all intents and purposes looks remarkably shiny and new.

Few ufologists now doubt their existence. There are those researchers who say the MIB are agents sent by an earthly power…such as the CIA, or even the notorious Russian KGB. Others, upon close examination, rule out such possibilities, insisting that because of their awkward appearance and peculiar behavior, the MIB are somehow affiliated with the ETs themselves, perhaps a sort of interplanetary Mafia that has been set up, and whose primary purpose is to cover their trail in instances where a report is likely to get too much attention, and the witnesses have to be SILENCED at ALL cost!

THE MIB IN HISTORY

The terrorists of ufology have always been with us, their existence having been well documented in reports the go back a hundred years or more. In 1864, for example, a UFO dropped several strange artifacts over a small Texas community. The objects – of unknown origin – were picked up and placed in a store window on the main street of town. The very next day a “stranger” dressed in a long black coat visited the shop keeper and offered a “high price” for the objects. But, because they did not belong to him, the store owner said he did not have the right to sell the items. That night the store mysteriously caught fire and when the ashes and rubble were sifted through, none of the artifacts could be found. Nor was the “stranger” ever seen again!

In more modern times researchers like John Keel, Timothy Green Beckley and the late Gray Barker have done a credible job of documenting the activities of the MIB. In his now classic work THEY KNEW TOO MUCH ABOUT FLYING SAUCERS, Barker told the story of Allen K. Bender, director of the now defunct International Flying Saucer Bureau, an organization that flourished in the early 1950s.

During his investigation, Bender somehow stumbled upon the secret of the saucers, how they were propelled, who flew in them, and where they originated from. He wrote to one of his many correspondents about his findings, but instead of getting a reply through the mail, he was visited shortly thereafter by three men dressed in black. For several hours two of the men drilled the researcher on the explanation for the UFO mystery. while the third merely sat and carefully observed Bender. The story they gave was “fantastic” and extremely frightening, Bender later said, and it portended great changes in all field of human endeavor, particularly in science. Before leaving, one of the MIB turned toward Bender and said, “If we hear another word form your office you’re in for BIG TROUBLE!”

According to published accounts (see MIB – ALIENS AMONG US by Beckley), Bender made a telephone call to a friend in which he casually mentioned his theory and subsequent visitation of the three men. Immediately after hanging up, the phone rang. A voice uttered that he knew of Bender’s conversation and that he had made a “bad slip” and warned him to stop his activities RIGHT AWAY!

The same day Bender suspended his organization’s newsletter and refused to talk about UFOs to his closest associates, his friends or even members of his immediate family. He was convinced that if he gave away the “secret” something very terrible would happen to him and those around him.

Other researchers have not been so lucky. One Australian ufologist was pushed down a flight of stairs in a large deparment store by seemingly invisible hands, since there was no one near him at the time of his fall.

In another episode which ended even more bleakly, two Army investigators died when their military plane crashed. At the time of the “accident” they were reportedly in the process of carrying a briefcase which contained metal from a UFO that had exploded off the coast of Tacoma, Washington. The incident in question included the appearance of “secret agents,” and even lead to an article in the TACOMA TIMES with the intriguing headlines SABOTAGE HINTED IN CRASH OF ARMY BOMBER. The reporter who wrote the story, Paul Lance, claimed that a mysterious telephone informer had called his office and indicated that the plane had been “sabotaged or shot down to prevent shipment of the flying disc fragments” to Hamilton Field. “Lending sudstance to the caller’s story,” continued Lance’s account, “is the fact that twelve hours before the Army released official identification, he correctly identified the dead in the crash…At McChord Field an intelligence officer confirmed the mystery caller’s report that the ill-fated craft had been carrying ‘classified material.'”

There have been other cases where UFO witnesses have been kidnapped right off the street, taken to some windowless MIB headquarters while blindfolded, sometimes drugged, and threatened with physical harm if they continued to talk about their experience.

For just such a reason, Carrol Wayne Watts of Loco, Texas doesn’t much like to talk about his UFO experiences anymore after he went to the aid of a motorist and was hit by a heavy object in the head while his back was turned. Watts claimed that that a space craft had landed on his property several times, that he had gone onboard the craft, met the object’s occupants, and taken photographs to validate his story. At first, he freely talked to the press, but later refused to do so, after his house was supposedly sprayed by machine-gun fire.

Some researchers even point to the untimley deaths of certain ufologist as the possible work of the Men in Black. They see the reported “suicides” of scientists like Dr. James McDonald and M.K. Jessup as being related to the existence of the MIB. They point to their belief that these men were on the verge of some important breakthrough when their breath was snuffed out. Those more “careful” in their investigation of such matters see these deaths as being unfortunate “coincidences.”