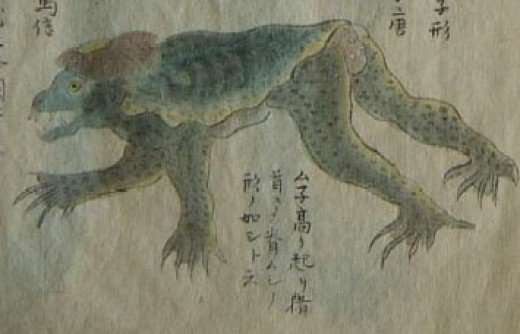 There is a persistent legend in Japan that tells of a strange, humanoid creature that inhabits rivers, streams, or any pool of water. This strange creature has sometimes been viewed as malevolent, benevolent, or even impish in nature. There are even some Buddhist temples that venerate the creature. This strange creature of myth and legend is more popularly known as the Kappa in Japan.

Stories about the Kappa are almost as old as the country itself. Its name is a combination of the Japanese words “kawa” and “wappa.” “Kawa” translates to the river, and “wappa” translates to child. It is also known as the Kawataro, Kawatora, and Kawahiki. These names roughly translate to “water tiger.” These are but a few of the more than eighty names associated with the Kappa. The Kappa is one of the most famous “yokai” or demons, or imps in Japanese folklore and religion.

The most common image of the Kappa is a creature that lures people to pools of water and devours them. It is said that the Kappa is especially fond of eating children, hence its name. This fearsome reputation is the basis for many stories of the Kappa told to scare children. Many Japanese parents have surely used this legend to discipline their kids to go to bed, or to scare them into obedience. Legend also says that the only thing a Kappa likes more than the taste of children is, strangely enough, cucumber. The legends about the Kappa go on to say that if you carve your name and birthday on a cucumber and somehow manage to feed it to a Kappa, he will leave you alone forever.

Kappas are often depicted in sculptures as humanoid figures complete with arms and legs, and faces resembling turtles. They also have pools of water on their heads representing their natural habitat. There is even a distinction between a Kappa and a hairy Kappa. A hairy Kappa is known as a Hyosube in Japan.

Some people have said that the legend of the Kappa is based on the Giant Japanese Salamander or Hanzaki. The Hanzaki is a very aggressive creature that uses its powerful jaws to full effect, ambushing and snaring its prey when it least expects it. The poor animal is then gnawed to pieces while it is still thrashing around in between the Hanzaki’s jaws. This is a very powerful creature, but it does not resemble a human being in the least. Others have hypothesized that the legend grew from sightings of the now extinct Japanese river otter. The animal was known to often stand erect while in the water, and any poor drunk who had too much sake would probably mistake it for the Kappa.

It is still widely believed that a Kappa actually resides in the waters of the Tono river in the Iwate Prefecture. The belief is so popular that the Buddhist temple in the area has erected a “komainu” or dog statue in honor of the Kappa. Legend says that the Kappa rose from the waters and extinguished a fire that almost ravaged the temple.