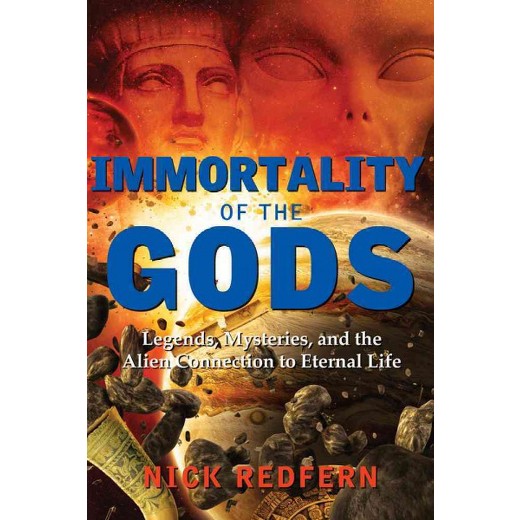 Review: Immortality of the Gods

I was saddened when my journey through The Gods Trilogy by Nick Redfern reached its inevitable end. I greatly enjoy the topic of Ancient Aliens (or Astronauts if you prefer), think very highly of the author and am a big fan of New Page Books.

Bloodline of the Gods and Weapons of the Gods offer fresh perspectives and updated information on themes already well established in the literature. Immortality of the Gods, the third and final book in the series, breaks new ground.

If the Gods of old, who dwelt in the Heavens and descended to Earth, were indeed immortal, or extremely long lived, was their lifespan natural to them or was it artificially induced? Mythology, religion, occultism, alchemy, folklore, UFO encounters and modern science all point to the possibility that it was due to something they ingested, be it nectar, ambrosia, golden apples, manna or a number of other substances.

Nick Redfern takes us on a wild ride through time, space and other dimension in search of this elixir of immortality… and its connection to gold, an element that plays a large role in Ancient Alien lore.

With Nick to guide us, we visit the Ancient Near East, Israel, India, Greece (thanks Nick!), China, Egypt and Ireland. Each location adds increasingly more pieces of evidence to support the book’s premise.

Then we move on to Saint Germaine, UFO occupants, Val Thor of Venus and come full circle to modern times and the former stomping grounds of the Anunnaki.

But wait, there’s more! Nick Redfern then introduces us to the soul-recycling activities of the Greys and afterwards the Raelians, their Elohim and physical immortality via cloning.

Immortality of the Gods then completes yet another circle and ends where it began: with the wonders of modern science.

Awesome! I really enjoyed this book and it opened the door (in my mind at least) to the possibility of several sequel Trilogies (which I would greatly enjoy reading).

Larger Than Life Living in the World Today