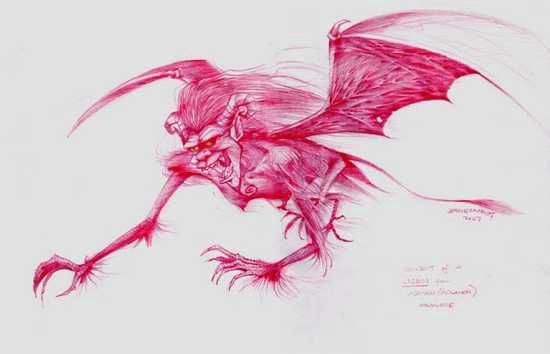 The PARANOIA Cryptid Files – The Sigbin

The tropical paradise of the Phillippines is home to many fantastic creatures of myth and legend. In a country that is blessed with natural wonders and a rich and diverse culture, it is only natural that stories of fantastic beasts crop up. Stories about the aswang, tikbalang, mananggal, and kapre are common. Now, you can also add the myth of the sigbin. Like all the afforementioned creatures, the sigbin exists in the realm of legend and speculation, but who is to say that these stories are not based on a real creature?

The sigbin’s appearance is a mix of the comical, supernatural, and downright scary. One could safely assume that the sigbin is a mix of Australia’s kangaroo, Mexico’s own cryptid, the chupacabra, and the extinct Tasmanian Devil. Witnesses have also said that it resembles a hornless goat. The creature is said to stand erect on two sizable hind legs and feet, like the kangaroo. It also has long pointed ears again, just like the kangaroo. Its snout is long, and is forever-etched in a malicious smile, just like the Tasmanian Devil of old. It is said to have sharp fangs like the devil, but it has spotted fur, which neither animal was known for having.

Popular folklore has depicted the creature as being noctural, and active specifically during the Holy Week. It is said that the creature leaves its domain during this period to hunt for children whom it devours for their hearts. The creature is said to suck their blood dry, and use their own hearts to create a n amulet.

By such a depiction, its clear that the sigbin is anything but friendly, but legends also say that there are also Sigbinan. The word itself loosely translates to “those who own a sigbin.” These are individuals who are said to own a sigbin, and have domesticated the creature as a pet. Having such a pet would be simply frightening, and not for the faint of heart, but this is exactly what the legend says. However, there is a practical and unlikely use for the creature. It is said that the creature actually brings fortune and wealth to its owners. Some stories have depicted the creature as being another shape that the aswang can transform into, or as a pet of the aswang, itself.